Sports Authority In River North Could Be Replaced By New Tower

RIVER NORTH — Big changes could be in store for the shuttered Sports Authority here.

But in a press release, Next Realty said it's also considering razing the building at LaSalle and Ontario streets in favor of a new office tower that could rise 17 stories tall.

The site's location in the heart of River North "makes it one of the most attractive areas for businesses looking to attract and maintain today’s coveted downtown workforce," Marc Blum, president and chief operating of Next Realty, said in a statement. 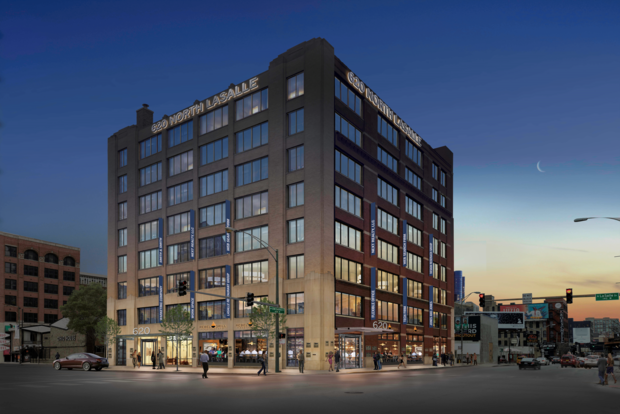 A rendering of the existing Sports Authority building if it were converted to retail and office space. [Next Realty]

The building was once home to Mages Sporting Goods, which billed itself as the largest sporting goods store in the world. Led by Morrie Mages, the store planted the handprints of star athletes such as Walter Payton and Bobby Hull on its facade for years until Mages sold his business to MC Sports in 1987.

Mages was a famous name in Chicago thanks to television commercials he made with former Cubs announcer Jack Brickhouse where Brickhouse would say something about a product and Mages would respond, "I'm witcha."

The family business dated back to the 1920s where Morrie Mages' father Henry owned a small sporting goods store on Maxwell Street. At the River North location, Morrie Mages was known for playing with the public address system, for example announcing, "Attention skiers! I've got a report from the weatherman: It's going to snow July 6."

The building interestingly remained a sporting goods store since, and the handprints remain.

Sports Authority eventually moved in, but the chain closed all its stores after filing for bankruptcy protection last year.

Other places nearby, including Ed Debevic's and the former River North Gino's East, have been razed recently to make way for new high-rise towers. Chicago developer Steven Fifield told DNAinfo last year that, because of its size, the big building might be more successful if it's converted into a hotel, offices or apartments instead of being torn down for a new development.

Next Realty has owned the building since 2002. Michael Kazmierczak and Kerry Middleton of CBRE are handling the listing.