Why Aren't Norridge, Harwood Heights Part Of The City? It Didn't Want Them 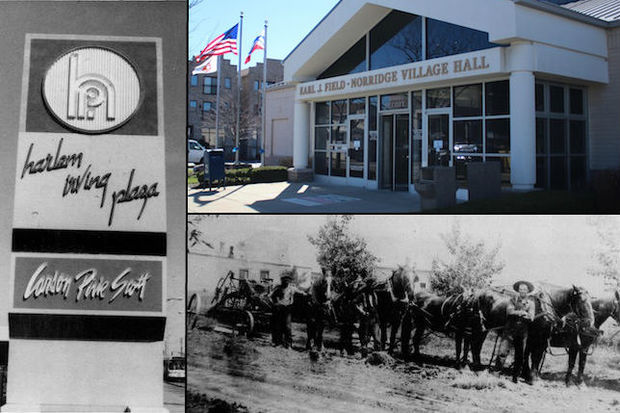 NORRIDGE — Bypass the expressway and take Montrose Avenue out to O'Hare Airport, and you might notice that the world starts to feel a bit different after Narragansett Avenue. For one thing, there are fewer potholes.

"The moment you cross over to the north side of Irving [Park Road], you can literally eat off those streets," said state Rep. Robert Martwick (D-Jefferson Park).

Martwick, whose district includes parts of Portage Park and Dunning, is not from Chicago. He's a third-generation native of Norridge, one of two suburbs cocooned on an "island" bordered by the City of Chicago in all four directions. 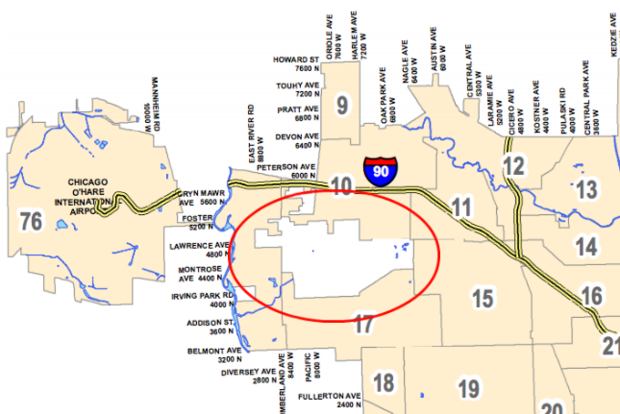 The villages of Norridge and Harwood Heights are surrounded by the city. [City of Chicago]

For at least half a century, the canoe-shaped hole in the city's Northwest Side has been a source of wonder and frustration for anyone who's ever squinted at a city map.

But the situation was no accident. The self-sustaining villages of Norridge and Harwood Heights owe their independence to a combination of stubborn farmers, wary city bureaucrats and plucky neighbors who wanted their own shot at governing.

'No need of paved streets'

In the 1930s, when Martwick's grandparents settled into present-day Norridge, it was little more than open prairie and low-lying forest, interspersed with some farms and dirt roads.

Some homeowners had made a fleeting effort in 1928 to get the city to annex the territory, hoping they could get access to the running water and police protection that their urban counterparts took for granted. But they ran into resistance from the dominant farming population there, according to Thomas McGowan's 1989 book "Island Within a City."

The homesteaders in the area "had no need of paved streets, sidewalks or street lighting, and weren’t willing to pay taxes for such things,” McGowan wrote.

Just north of the area, the city's boundaries were creeping out to swallow the industrial and commercial corridors of Milwaukee Avenue and Northwest Highway. And to its south, a community called Dunning was forming around the Chicago State Hospital, formerly an insane asylum and home for poor workers.

That left a hole in the city with sparse population and even less infrastructure.

"The story I was always told is that when city surveyors were annexing all this territory, they just got to where we were, and said 'Yeesh,'" said Martwick, who served as a Norridge village trustee before voters sent him to Springfield in 2012. "Like 'I'll go left, you go right, and we'll meet on the other side.'"

Until they were incorporated in 1948, Norridge and Harwood Heights were mostly occupied by farms. ["Island Within a City"]

'They wanted a quick fix'

In 1947, residents near Lawrence and Harlem avenues, led by a Navy veteran named Herbert Huening, made a second, more serious effort to join the city.

"Now that the war was over and things were getting back to normal, people wanted ... what citizens of established communities had," McGowan wrote. "Lighted, paved streets; police and fire protection; adequate water; storm sewers.”

But the deal didn't look so appealing to Chicago's City Hall, said Mark Dobrzycki, who served 12 years as a Harwood Heights village trustee.

"For the city, it just seemed like a cop-out," Dobrzycki said. "It looked like these people just didn’t want to fix up their own water and sewer lines, so they wanted a quick fix and to have Chicago pay for all those upgrades."

Rebuffed by city leaders, Huening convinced his neighbors that they could run the show themselves. They drew up articles of incorporation for the village of Harwood Heights, with a population of 400 people.

Months later, another contingent of residents just south of Montrose Avenue prepared their own push to join the city.

Calling themselves the Annexation Improvement Club, the group scored audiences with 48 of the city's 50 aldermen to make their pitch, McGowan said. They even got tentative approval from the City Council, officially joining the city for a brief period.

But after just 30 days as a Chicagoan, Annexation Improvement Club member Joseph Sieb suggested they secede and plant their own flag, just like Harwood Heights had done. Borrowing their name from both Norwood Park and Park Ridge, the village of Norridge was incorporated on Dec. 4, 1948.

Ascending to the role of Village board president in 1951, Sieb rallied the new government to pave the roads and dig the sewer lines that the area had long begged for. They founded a police department, created a park district and wooed developers with cheaper land and looser building restrictions than could be found inside the city.

Norridge shared some of its public services with Harwood Heights, merging their school district and fire departments. The massive Eisenhower Library was built in 1973, today accessible to residents of both villages.

The "island" might have been too isolated to attract much fanfare in the early 20th century, but it proved a ripe target for the car-centric building boom of the 1950s.

"Suddenly, people were realizing they didn't need to move all the way to Arlington Heights for a 20-foot driveway and a two-car garage," Dobrzycki said. "And the best part was that you never had to worry about city bureaucracy — you can just walk down to the Village Hall and get all your problems sorted out."

In 1955, Sieb convened business leaders and encouraged them to build a shopping center at Harlem Avenue and Irving Park Road, then the site of a horse stable and golf course. If open spaces didn't attract outsiders to Norridge, a Woolworth's and Fannie May Candies certainly would.

Joseph Sieb served as village president of Norridge from 1951 until his death in 1998. ["Island Within a City"]

By the early 1960s, the tables had turned on the city leaders who had spurned the neighbors' pleas for annexation.

Instead of sinking their tax dollars into expressways and Downtown high-rises in Mayor Richard J. Daley's Chicago, citizens of Norridge and Harwood Heights got to carve out a retail empire, exclusively for their own benefit.

From Martwick's telling, Sieb — who served as mayor until his death in 1998, making him the longest-serving municipal leader in state history — often boasted of calls he got from Daley, asking 'Are you ready to join the city yet?'"

Sieb, he said, hung up the phone.

'The principle of having to fend for ourselves'

Today, the signs are everywhere that Sieb was right to be skeptical of city life, Martwick said.

Not only do Norridge and Harwood Heights' streets have fewer cracks and less litter, he said, but the village can afford a heavier police presence than the city's Jefferson Park Police District, where ranks dipped below 200 officers last year for an area covering 36 square miles.

And thanks in part to the sales tax raked in through Harlem-Irving Plaza, a megamall now anchored by a Target and packed with ritzy department stores, the village hardly needs to collect any property taxes to keep public services running.

It was a formula that village leaders drew up by necessity, Martwick said.

"Norridge was founded on the principle of having to fend for ourselves, so we've always treated the village's finances as if it were our First Communion money," Martwick said. "It's the benefit of having that island mentality."