How To Make A Chicago-Style Brownie At Home (VIDEO)

By Kelly Bauer |&nbspMarch 6, 2017 5:16am
@bauerjournalism
Twitter Facebook Email More
The brownie was invented in Chicago at the Palmer House in 1893.
View Full Caption
DNAinfo/Kelly Bauer

CHICAGO — One of the most popular desserts in the world got its start in a Chicago kitchen.

It started more than a century ago: Bertha Palmer, wife of Palmer House hotel creator Potter Palmer, was a leading figure during the World's Columbian Exposition in 1893. Tasked with organizing lunches for attendees, Palmer went to the Downtown hotel's chef and asked him to make her guests a chocolate treat, said Ken Price, a historian at the hotel.

"With her inspiration, we're very proud to say, that here in the Palmer House in 1893 was the creation of the beloved American confection called the brownie," Price said.

The Palmer House showed us how to make Chicago-style brownies:

Of course, the brownie isn't the only thing Bertha gave to the world: She fought for women to gain the right to vote, looked for ways to empower women (even hiring the first woman architect to build at the World's fair) and was a philanthropist and successful businesswoman, Price said.

The Palmer House Hilton, 17 E. Monroe St., continues to use the Bertha-inspired brownie recipe more than a century later.

This Palmer House sweet is different than your run-of-the-mill brownie. It's less cake-like and more dense than most brownies, said Fabrice Bouet, the hotel's pastry chef (but don't call it a "fudge" brownie, Price said).

And this brownie comes with an apricot glaze on top — something bakers used to help preserve the brownie in the past, Bouet said.

The brownie gained international fame after the 1893 World's Fair and is enjoyed around the world. Of course, that's all the more reason you should try a batch of the original recipe with this guide from the Palmer House.

How to make it

Here's how you put it all together:

1. Melt your chocolate and add your melted butter to the chocolate. Mix.

2. Mix your sugar and flour in a separate bowl.

3. Mix the dry ingredients into your chocolate for four to five minutes.

4. Add the eggs to the chocolate and mix.

5. Pour the mix onto a baking sheet and spread it evenly.

6. Put crushed walnuts on top of the chocolate and press down softly.

8. Remove the brownies from the oven and let them cool for 30 minutes.

9. Spread apricot glaze (1 cup of apricot preserves and 1 cup of water boiled for two minutes in a saucepan) on top of the brownies. 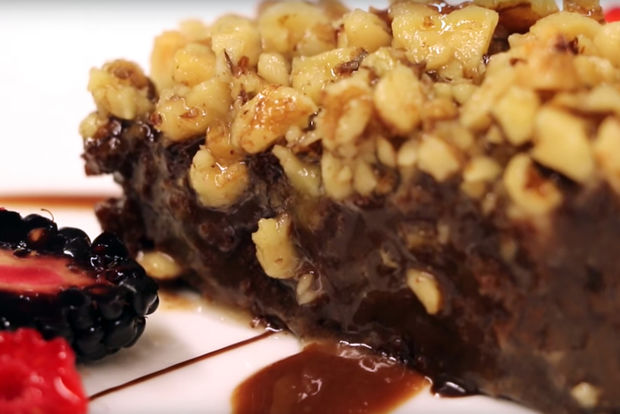 The brownie was invented in Chicago at the Palmer House in 1893. [DNAinfo/Kelly Bauer]

• Bouet prefers to use a chocolate with a high cocoa content.

• You can add a bit of vanilla extract to the brownie mix, but it is optional.

• When baking, you cannot "test" these brownies are done as you would normally do with a toothpick — the toothpick will always come out covered in brownie because this recipe is so rich. Instead, the Palmer House suggests bakers look for the the brownies to rise ¼-inch and the edges of the brownie to become "a little crispy" before removing them from the oven.

• You can keep these brownies in the fridge to preserve them, Bouet said.

• Want to snag an official Palmer House brownie? The hotel still uses this recipe to make them, so you can grab one there. And Price, the historian at the hotel, hosts a lunch called History is Hott!! where he teaches attendees about the hotel, the Palmer family and — yes — the brownie. You get one of the chocolate treats at the end.

• How To Make Paczki For Fat Tuesday At Home (VIDEO)

• How To Make Chicago-Style Deep-Dish Pizza At Home (VIDEO)