Dominique Jones distributed nearly 200 bouquets late last week, as the Beverly resident nears the end of her tenure with the crown and sash from the Miss United States Pageant. She won the state title in April.

Jones partnered with Totally Positive Productions Inc. to distribute the flowers. This Chicago-based non-profit offers programs for children between the ages of 7-25 in an effort to deter gang and drug involvement.

Jones' mother is on the board of directors for the group, which worked with ProFlowers to secure the donation of the bouquets. She is also an alumni of Wendel Green Elementary at 1150 W. 96th St.

Dominique Jones graduated from Kellogg Elementary at 9241 S. Leavitt St. in 2003. She credits the teachers there for helping her overcome her perceptual learning disorder, which she likens to dyslexia.

Jones said it was often difficult for her to read and write as a child. But the teachers at Kellogg gave her the tools to overcome her condition, and she went on to graduate from Morgan Park High School and Eastern Illinois University.

She studied applied engineering and technology at Eastern and also participated in her first pageant there. She then she's earned a master's degree in science and industrial technology from Alabama A&M University.

When competing in the Miss United States Pageant, Jones told judges she wanted to use the title to show the world that careers in math and science are possible despite the challenges that come along with such a learning disorders.

"It's been a great experience. I know that I've accomplished everything I wanted to accomplish as Miss Illinois United States," Jones said late Friday. 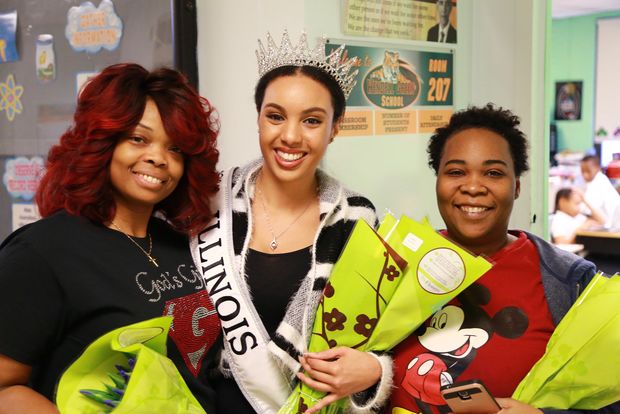 Jones has been taking some time off to travel while working as a flight attendant for American Airlines. She is currently working to transition back into her previous career as a construction project engineer.

She said her biggest accomplishment while wearing her pageant crown was speaking out against a proposed school merger that would have closed Kellogg Elementary School. She marched in support of the school Sept. 24 during a "Unity Walk."

The proposal was eventually scrapped, and Jones said handing out flowers to the teachers at Kellogg seemed like an appropriate way to close the book on the challenging year as well as her run with the title.

Jones also credited another fellow Kellogg alumni and videographer, Alexander Fridge, for capturing the flower distribution both in pictures and on video.

"It is something that really turned out great," she said.