Edison Park School To Get Annex — No Thanks to Alderman, Rahm's Office Says

EDISON PARK — Five years' worth of badgering from parents and local leaders is being answered with a 13-classroom annex for the severely overcrowded Ebinger Elementary School, officials say.

Mayor Rahm Emanuel dropped by the school to unveil the project, which will include a new computer lab, playground and parking lot, according to 41st Ward Ald. Anthony Napolitano.

"I'm still smiling from ear to ear, just thinking about it," said Napolitano, whose three children attend the school. "So many parents have been pleading for this for so long, and it's the greatest feeling in the world as a father to know that it's finally happening."

The two-story, 35,600-square-foot annex will house a new lunch room, converting the current cafeteria into a music room, according to a presentation from the Public Building Commission, which tackled similar Northwest Side annexes recently. 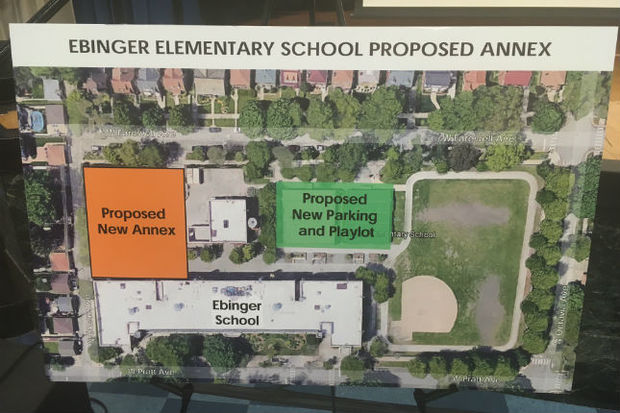 With 800 students enrolled in a school only built to accommodate 510, Ebinger is one of the city's most crowded elementary schools, according to Chicago Public Schools data.

Ebinger parents and teachers have been clamoring for the extra space since at least 2012, when the school convened an "annex committee" and started sending advocates on monthly trips to Board of Education meetings in the Loop, according to Local School Council member Tim Heneghan.

"It's been quite a process, and parents and LSC members have had to take a lot of time from work to make a day out of going Downtown," said Heneghan, who was elected last year as Democratic committeeman of the 41st ward.

"We kept having to squeeze a lot of information into a short statement, saying how we've been able to implement so many great things, even as we've lost so much learning space." 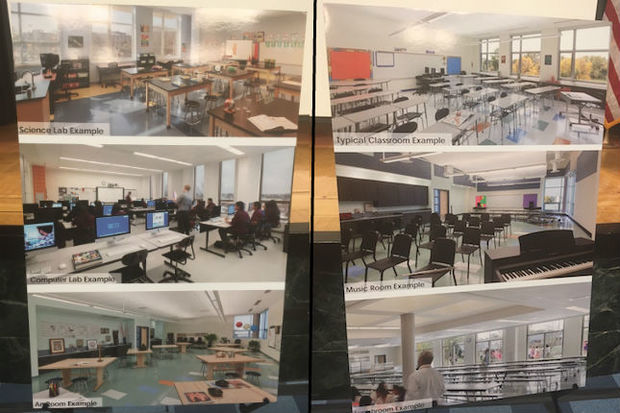 The drawn-out lobbying process for the multimillion dollar project started under Ald. Mary O'Connor, and Napolitano picked up the baton after he unseated her in 2015, making "nine or 10" trips to the district office to plead for the annex, he said.

In September 2015, Emanuel visited Ebinger and floated the possibility of building the extra space. Emanuel was looking for Napolitano's vote for his $7.8 billion 2016 budget which included a historic $588 million property tax increase.

Napolitano likened the tax hike to "a punch in the face," and the spending plan passed without his vote. The plan set aside $45 million for two Northwest Side school annexes: one was announced on Feb. 1 for Prussing Elementary School in Jefferson Park, and the other was targeted for Ebinger.

The alderman said the result was proof that Napolitano could deliver for his ward without bending to what he characterized as the mayor's will.

"I had to listen to all of the city workers in my ward who told me not to vote for that property tax increase," Napolitano said. "I told them I wouldn't sell my soul to the devil, even if my own kids would have been affected personally.

"I told them that the raw facts of the overcrowding would necessitate that annex, and that's exactly what happened," he added.

Emanuel shot back at Napolitano through a spokeswoman Tuesday, noting that the annex is being paid for by the very money that Napolitano had objected to freeing up.

"Instead of congratulating himself, the alderman should thank his colleagues in the City Council for voting on the [school construction funding] and thank them for prioritizing the future of our students ahead of their personal politics," Emanuel press aide Lauren Huffman wrote in a statement. "They, along with the school principal and community, supported this much-needed annex to relieve overcrowding at Ebinger."

Napolitano is still holding out for a similar project at Dirksen Elementary School, at 8601 W. Foster Ave. in Norwood Park, now straining at more than 160 percent capacity, he said.

The combined planning and construction of Ebinger's annex is expected to take at least two years, officials said.