JEFFERSON PARK — Any time developers want to build something larger than the existing zoning allows for, they typically have to make their case to neighbors first. Based on how constituents react, the local alderman could suggest changes to the project, or reject it outright.

But a group looking to build a five-story storage warehouse in Jefferson Park got a rare jump on that process.

On Jan. 27, Ald. John Arena (45th) signed a legal settlement with LSC Development LLC, closing the chapter on a lawsuit the developer had filed over Arena's rejection of an earlier proposal.

The document compels the alderman to "agree to support and not to challenge" the group's most recent proposal, submitted to the Chicago Plan Commission on Jan. 25, to erect an 80-foot-tall storage facility on the site of a former food distribution center at 5150 N. Northwest Highway.

5150 PD by DNAinfo Chicago on Scribd

A proposal to build a five-story storage facility at 5150 N. Northwest Highway, submitted to the Chicago Plan Commission on Jan. 25

The agreement was inked nearly two weeks before Arena invited residents to hear a presentation from the developers and ask them questions about the building being planned in their neighborhood. The project was almost universally panned by attendees, though they saved their strongest language for the 100-unit mixed-income apartment complex being separately proposed next door.

While the sequence of events squares with the letter of city law, which requires aldermen to hold public hearings over zoning changes before they're submitted to City Council, critics of the alderman point to the agreement as a sign that the pair of proposals was wrapped in a bow before constituents ever had the chance to weigh in.

"People have really had it with the underhanded way [Arena] has been going about this from the start," Ron Ernst, a member of the Jefferson Park Neighborhood Association, said at a Tuesday protest outside the alderman's office. "He's made it clear he doesn't care what the community wants. He doesn't want input." 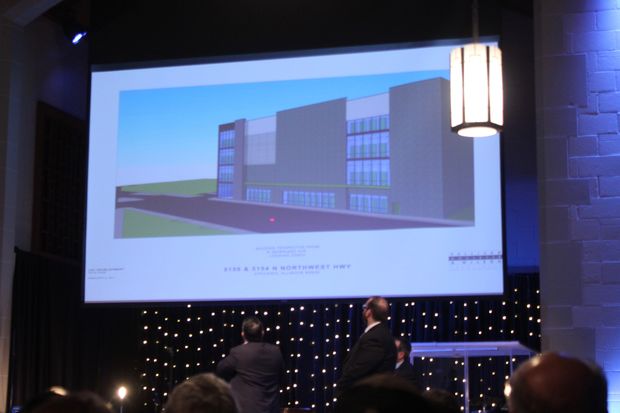 For his part, Arena and his staff contend the agreement they struck with LSC Development is "a much better deal for the taxpayers and local residents than what was initially proposed," according to Owen Brugh, Arena's chief of staff and general counsel.

In April, the developer scored a permit to renovate the existing building and convert it into a storage warehouse. But before construction started, Arena threw up a last-minute roadblock by changing the zoning on the property.

But the alderman defended the move at the Feb. 9 meeting, calling it a roundabout means to a more lucrative end.

"The current building is antiquated, and unless the alderman has a zoning change to review, there's no conversation at all," Arena told attendees. "So we saw an opportunity to reach out to the developers and see if we could partner with them in a better way."

Razing the existing structure and replacing it with a mix of storage, retail and apartments would rake in an annual $500,000 in property taxes, compared to around $135,000 per year if the site were renovated as is, Brugh said.

This spring, Arena will submit an ordinance to rezone the entire parcel, Brugh said, laying the groundwork for construction of both the storage facility and the apartment complex.

Full Circle Communities, the developer behind the apartments proposal, still has to go through "a lot more steps" before getting its project approved, including submitting its own proposal to the commission, Brugh said.

But with the zoning change being queued up, the group would have legal reign to build up to 12 stories with 186 residential units.

A building that tall is "nowhere in the realm of what [city planners] or the alderman would be willing to support," Brugh said, though he declined to put a "firm cap" on how many units the building could house.