Jefferson Park Housing Debate Draws Voices From Around The City

But between seething visitors from neighboring wards and affordable housing advocates lodging their own smaller counter-protest, the event reached a size and pitch rarely seen so far from Downtown.

Last month, fresh venom was injected into the debate over three planned apartment buildings when Arena announced a fourth, set farther north than the others at 5150 N. Northwest Highway and including 100 units prioritizing veterans and people with disabilities.

That Full Circle Communities, the developer and potential operator of the seven-story building, would rent 80 units below market rate — including at least 20 for CHA voucher-holders — sent neighbors into a tailspin, immediately sparking a mighty backlash that rippled to surrounding wards.

At a raucous Feb. 9 meeting called to discuss the project, speaker after speaker railed against the affordable units' potential to bring the city's surging violent crime into a neighborhood known for its relative safety. Opponents inside the meeting, along with hundreds more turned away at the door, drew frequent comparisons to 20th-century megalopolises like Cabrini-Green and the Robert Taylor Homes.

Jefferson Park residents like Ben Goldsmith, who helped organize a counter-protest in support of the development Tuesday, sensed bigotry beneath the surface of his neighbors' objections, he said.

"When you hear all this talk of criminals and rapists coming in to commit crimes, those are common tropes that people use as dog whistles," Goldsmith said. "They're not coming out and saying the N-word, but you know what they're saying." 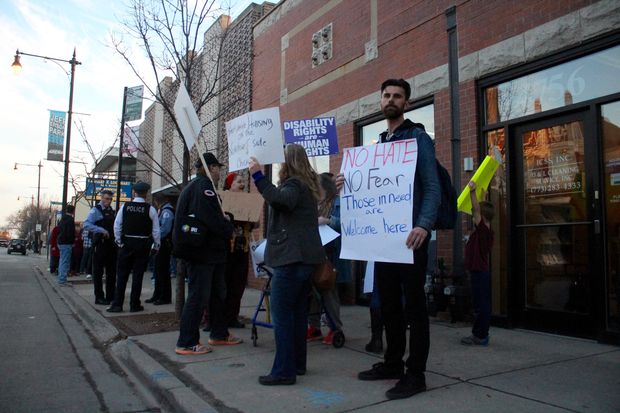 The debate emerged as a flash point in a city still girded by tension over the 2016 presidential election, with counter-protesters at the Feb. 9 meeting waving the same "Hate Has No Home Here" signs crafted as a rebuke to President Donald Trump.

But laying national political tones over a local zoning issue unfairly pulls the spotlight away from neighbors already opposed to large-scale developments, according to Victoria Aviles, a Jefferson Park resident who said she represents a group of "moderate" opponents to the projects.

"We want to show that although there are some loud opponents who may be out here for the wrong reasons, it's really just about not wanting our neighborhood to turn into a high-density hub," Aviles said. "You could be putting 100 market-rate units in there, and we'd all still be out here."

With a daughter heading into kindergarten, Aviles was worried that a patchwork of new school annexes wouldn't contain their overcrowding if hundreds of new residents were brought to the neighborhood, she said. And like many other opponents, Aviles objected to Arena's tactics in bringing about the proposal, which included introducing a last-minute zoning change to prevent a different developer from renovating the current site. 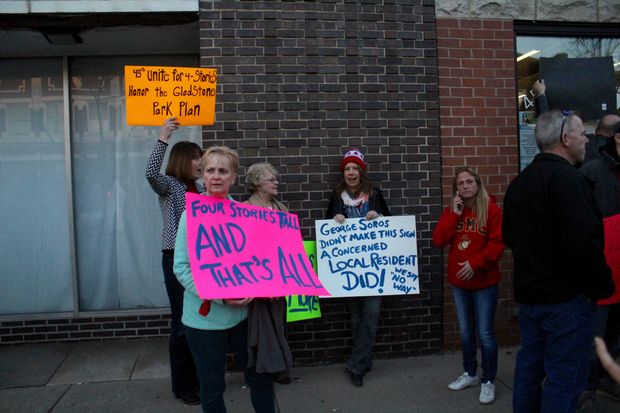 But also like the rest of the protesters, Aviles had been encouraged by event organizers to shy away from attacks on affordable housing. Instead, they passed out signs with slogans like "four stories or less," echoing a building height guideline from a study recently published by city planners.

But that wasn't enough to repel a network of activists from the Chicago Housing Initiative, an advocacy group for low-income housing programs, from joining counter-protesters with slogans like "Those in need are welcome here." Longtime LGBT rights activist Andy Thayer even wheeled his portable microphone and speaker system into the crowd, the same he'd used at Black Lives Matter demonstrations across the city.

Visitors like Thayer were jeered and hectored by the thick crowd of protesters, who called out challenges like "Who's paying you?" and "Hate doesn't live here, and neither do you!" 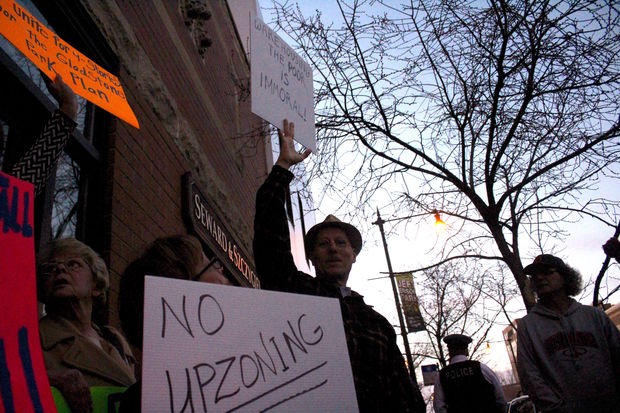 Matt Podgorski, whose Northwest Side GOP Club has turned fighting the apartment developments into one of its first major advocacy causes since it formed last year, said the transplants were a sign of how few of the proposal's supporters actually live in the neighborhood that would be affected by it.

"I honestly don't know who all these people are, or what neighborhoods they're coming from," Podgorski said. "But we don't go to their neighborhoods and tell them where to build housing, so I don't know why they think they have to come here."

But Podgorski, who lives in Edgebrook, had dropped in from a different community too. And while the GOP club has multiple members living in Jefferson Park, its unified and vocal opposition to the new units are just one sign of the issue's spillover into surrounding neighborhoods.

Unlike Napolitano, Arena was ignoring the calls of his constituents and blithely chalking up their objections to racism, Podgorski said.

"What matters here is that [Arena] went back on his promise to the community, and his constituents rightly feel betrayed," Podgorski said. "Crime and all that other stuff is not really our concern."

But in the aftermath of a shooting that occurred less than two blocks away from the protest just as it was beginning, the debate couldn't escape the specter of violence.

When Haley Goodwin arrived home to see her apartment in the 5400 block of West Higgins Avenue besieged by sirens and police tape, she mentioned the housing proposal to her roommate.

"More and more, we're seeing gun violence, vandalism ... people just not abiding by simple rules of society," Goodwin said. "I don't think people [with CHA vouchers] do that on a daily basis. But I definitely think it would happen more often if they came."