Kellogg Elementary Kicks Off 'We All Live Here' Project

BEVERLY — Students at Kellogg Elementary School want to send a simple message to everyone in Beverly, Chicago and even the world: "We all live here."

This message will soon be made into a sign in both English and Spanish using the school's unique typeface. The signs will be attached to the fence just outside of the main entrance at 9241 S. Leavitt St., Principal Cory Overstreet said.

"The message I thought was just perfect for a school like Kellogg," Overstreet said Tuesday. "It's a positive message."

He reached out to Rich Alapack last year after learning about the "We all live here" project through social media. Alapack is a former graphic designer who worked in the advertising industry before dropping out to work with schools.

He has since partnered with 35 schools in the Chicago area to spread a message that he says speaks to gender, income and racial equality as well as an aspect of environmentalism.

Alapack's project begins with a school visit, where he provides a bit of background as well as a short lesson in graphic design. From there, students are then asked to draw pictures to illustrate the words "We all live here."

Finally, the middle school students were asked to create a logo for the school incorporating this same theme. 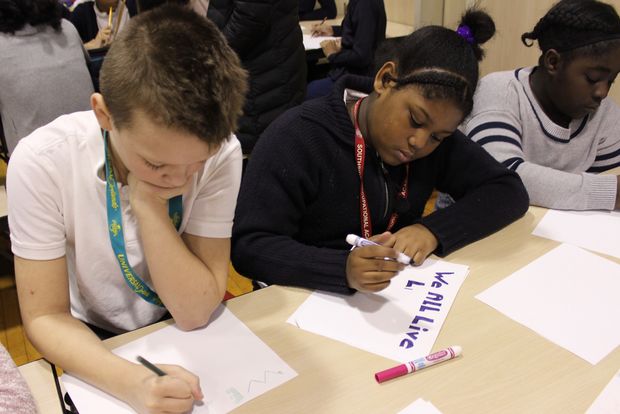 Students at Kellogg Elementary School in Beverly work to help develop a logo for the school. The winning logo will be placed on T-shirts, coffee mugs and other items that will be sold to help pay for a sign that reads "We all live here." [DNAinfo/Howard A. Ludwig]

"If the kids are going to care about this, I felt like they needed to be involved in the creation of it," said Alapack, who has a goal to have his message of inclusion on display in least one school in all of Chicago's 77 neighborhoods.

Alapack collects the student's drawings and uses them to design a logo which is then placed on T-shirts, coffee mugs and more. These items are sold online and at local stores. The proceeds help pay for the "We all live here" and "Todos vivimos aqui" signs at Kellogg.

"Public art helps us to see this message every single day. So you guys will see this when you come to school. Your parents will see it when they drop you off. And people in the neighborhood will see it too," Alapack told a gymnasium full of middle school students.

Alapack expects Kellogg's logo to be completed in a couple of weeks. The coordinator of the project pays his salary, in part, by taking a small percentage of the online sales. Corporate sponsors are also used to support the project.

The two signs at Kellogg cost $1,500, and sponsorships cost $250 each. Alapack believes the relatively small amount for the sponsorships has the potential to create future opportunities for the school as well.

An unveiling party for the signs is expected in June. Sponsors are invited as well as students, parents and others from the surrounding community, Alapack said.

"I just really wanted to create something positive," said Alapack, who began his project by photographing concertgoers in the summer of 2015.

Then, he asked people in the crowd at Lollapalooza and the Pitchfork Music Festival to pose with signs that read "We all live here." The photography project ended up becoming a viral sensation and the launchpad for his current project.

Overstreet added the effort also speaks to the current success at Kellogg, which saw considerable interest from new students at a recent open house and several student transfers in recent months.

"This is a project that is really picking up steam," Overstreet said. "There are a lot of wonderful things happening at this school."