What's Next For Triple Grammy Nominee BJ The Chicago Kid?

CHICAGO — BJ the Chicago Kid's first Grammy nomination came courtesy of the soulful hook he laid on ScHoolboy Q's "Studio," a song he worked on so intensely he couldn't leave the studio to see his girlfriend until it was finished, according to its lyrics.

The ode to hard work is a testament to the young, up-and-coming R&B star's hustle. According to his annotations of the lyrics, he slept overnight in the studio 27 of 30 days while creating his album "In My Mind," which dropped a year ago Sunday.

So it's not surprising where he was when he got the news of his Grammy nominations this year: "In my studio asleep," said the vocalist, who was born Bryan James Sledge. "I did a session so late the night before it made no sense going home. I let the phone buzz for about an hour... [but] it just kept going until the point it destroyed my sleep."

His lock screen was flooded with congratulations. It took him a minute to figure out why. Despite an earlier heads-up from his manager, the possibility of another Grammy nomination had slipped his mind.

BJ's childhood on the South Side was filled with music: Both his mother and father were choir directors. He was the youngest of three boys — all drummers. His uncle played the piano and bass guitar, and his cousins were into percussion.

"My grandma played guitar better than my granddad, who was a guitar player," he said. His earliest memories all have common themes: "mama singing, daddy singing, cousins singing ... [music] is very potent in our family."

Though his home life was filled with the joy of music, tragedies were frequent outside the family's home near 92nd and Vincennes Avenue. The neighborhood park that shares its name with the area — Brainerd Park, 1246 W. 92nd St — is "the heart of the area," BJ said, and "it's an actual war zone."

"The park is a beautiful park. Everyone has played ball there, from NBA players to AAU grade [players] to playground legends," he said.

But a contentious gang boundary divides the square park "like a grilled cheese," he said.

"One half of the square is one gang, but the outer crust is a whole other gang in a whole other area. It goes down through this park," he said, tracing the boundaries from memory with his finger. "Through this place built for love, creativity and [for] people to have fun, and kids to play."

He remembers the park's ups and downs throughout his childhood: big parties and family picnics interwoven with memorials and random bursts of violence.

"I got a homie that got shot midair for a jump shot. He got shot out of the air and died. He was a rap artist — very talented — from the area," BJ said solemnly of the slain rapper "Kid," who he'd known since childhood.

"I still remember some of his raps. That’s how powerful and potent his gift was to us in that neighborhood. He was a staple in the area. Everybody knew Kid from our neighborhood," he said.

In the early 2000s, BJ left Chicago and headed West. By 2006 he was inching into the scene as a featured artists, with credits that included Kanye West's "Impossible," a song featured in "Mission: Impossible 3."

He also sang backup for Usher and wrote for Mary J. Blige.

After releasing three mixtapes, he dropped his debut album, "Pineapple Now-Laters" in 2012. In 2015, it was his feature work appearing on ScHoolboy Q's "Studio" that caught the Recording Academy's attention, which BJ says opened doors for him.

"The Grammy is the highest musical accolade possible," he said, and that nod propelled his solo work forward.

But BJ said he feels guilty about leaving his family to chase his dreams.

The acclaim that came with his triple Grammy nod this year was a thank-you to them, he says, and "one of my biggest joys" was to share it with them.

After 10 years trying to make it, BJ has a second family he's also sharing his success with: his musical team, his crew and other musicians with whom he's traded guest appearances as they help each other up.

"That part is what I think continued to make me cry that day [of the 2016 Grammy nominee announcements] — the homies that we inspire," he said.

Seeing someone like him land gigs like singing the national anthem at President Obama's farewell address "inspires generations to come. I think that’s what helped me make it. It felt good to put something back in the pot that I took out."

[BJ The Chicago Kid's "Woman's World" was nominated for Best Traditional R&B Performance at the Grammy's. The video features him performing the powerful song for his mother.]

BJ's latest album, 2016's "In My Mind," marked the launch of his career as a standalone artist, and he paid the favor forward, enlisting another kid from Chicago to be featured on his album: Chance The Rapper, who lent his voice to "Church."

"He’s like my little brother, but he’s a big brother too. Look at what he’s doing. He’s a leader. ... I think I would be less of a man to not call him a leader," BJ said of the breakout star nicknamed "Little Chano From 79th," a nod to their shared South Side roots.

Chance and BJ's careers may have started in the same place, but they followed two different paths. Chance made a go of it at home, dropping his free independent mixtapes from his base in Chicago.

Though, BJ came home empty-handed at the Grammys this year, Chicago didn't. Chance the Rapper took home three awards, including the first of the night for Best New Artist.

"I was sitting maybe four rows behind him, and when they called his name I jumped up like ‘yes!’ What’s crazy is I had many friends in that category. If Anderson .Paak would’ve won I would’ve done the same thing," he said.

Though he left the South Side nearly a decade ago, he carries memories of Chicago wherever he goes. Lately he's been sporting an All Things Regular New Era fitted cap — an exclusive hat from local streetwear maven Regular Ol' Ty — that he donned while in town as a featured guest in Macy's celebration of Black History Month.

When he's in Chicago, BJ says he loads up on his favorites: Harold's Chicken, Garrett popcorn, streetwear from Leaders, Fat Tiger Workshop, RSVP Gallery and, of course, pizza.

BJ said he alternates in his pizza seleciton: "Giordano's or Lou's, whichever one I'm feeling."

And when he's deep on the South Side he heads to Home of the Hoagy.

"I just love feeling the city," BJ said. "Gotta drive down Lake Shore Drive. Gotta hit Hyde Park a little bit. Gotta hit the ‘hundreds.' I just look at stops I would get off at and just think back. It keeps me rooted, keeps me locked in." 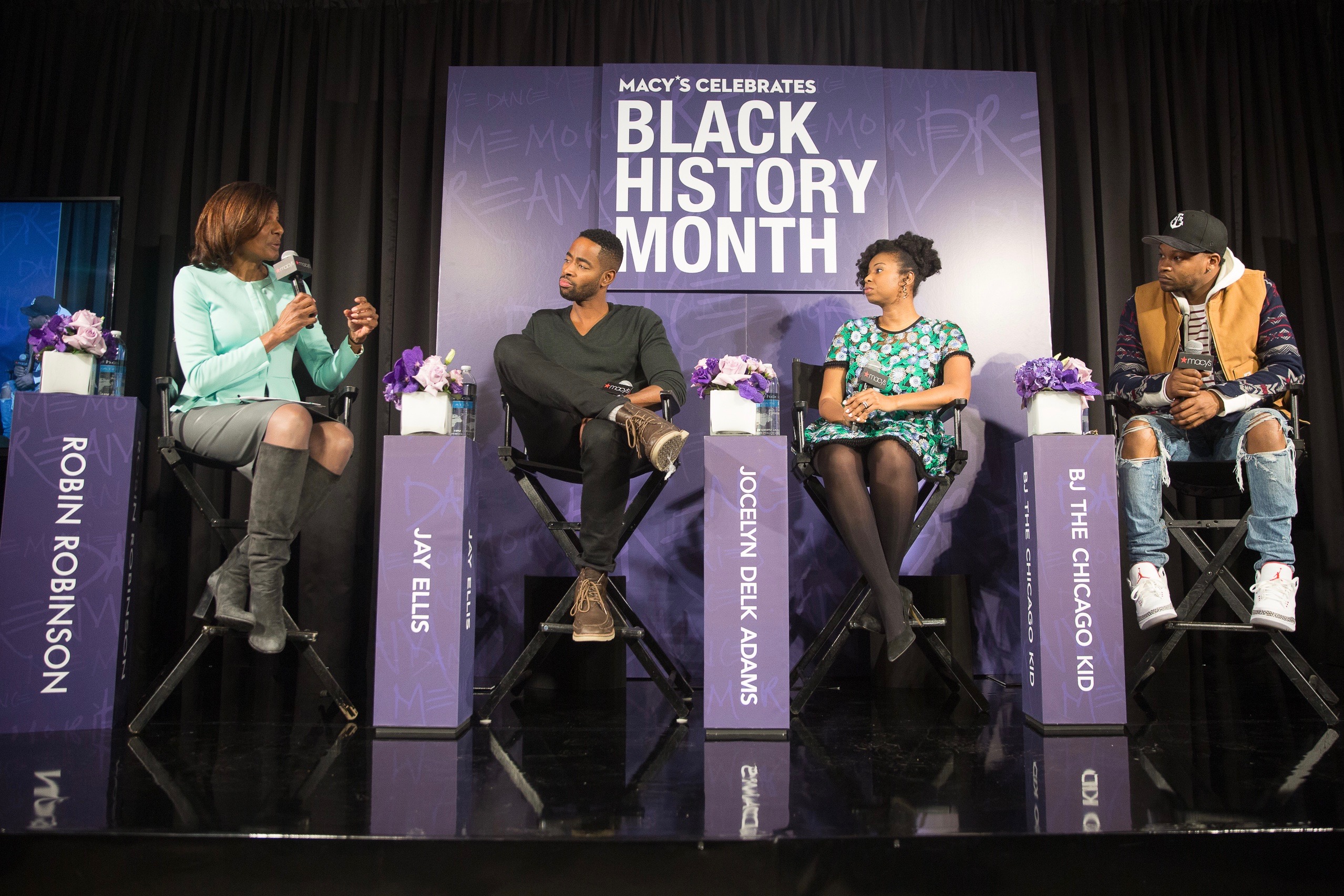 "I turned on the light like ‘What?’ I opened the message, read the message and called my team. I was crying on the phone. I cried for like 30, 45 minutes. Every time I stopped and got myself together, I broke back down," he said.

For the 32-year-old vocalist, who left the South Side of Chicago to pursue music in L.A. more than a decade ago, the nominations signified his arrival after a long journey.

But BJ isn't one to rest on his laurels. Just one day after leaving the Grammys empty-handed, he released "Roses," which despite it's Valentine's Day Eve release, is more than a song about love.

"I just believe in giving people their roses while they’re living. That’s my new thing — period," he said. "I told my folks the other day when I put on my suit, going to the Grammys, that was the day of a new life. Whether we win or lose it’s a new life. New song. New life. New music. New BJ."

But it's far from his first reinvention.

Next up, his latest project: a Fox show called "Shots Fired," which "examines the dangerous aftermath of a racially charged shooting in a smaller town."

He'll have music throughout the show and sings its theme song, he said.

"This thing is so thought-provoking. I’m honored to be a part of this musically, to have my family and the world think differently about America and what would really happen if the tables were turned," he said.

Still unknown is if he'll try to grab some acting credits.

All the Kid from Chicago would say is: "Not this season."