JEFFERSON PARK — One of the key selling points behind a new crop of apartment buildings planned for downtown Jefferson Park is their potential to bring in new customers for surrounding businesses.

"When a business is looking for somewhere to expand, they're looking for a certain number of residents and a certain amount of foot traffic," Ald. John Arena (45th) said last month while unveiling a controversial proposal for 100 mixed-income apartment units at 5150 N. Northwest Highway. "So all we can do is try to set the table for creating that kind of economic activity."

But the neighborhood's two most prominent business organizations, the Jefferson Park and Gladstone Park Chambers of Commerce, have stood shoulder-to-shoulder with their counterpart neighborhood organizations in staunch opposition to the Northwest Highway proposal.

They point to a new development study, cobbled together over more than a year by city planners with input from neighbors, businesses and public officials, that suggests capping new development along Gladstone Park's Milwaukee Avenue corridor at four stories. 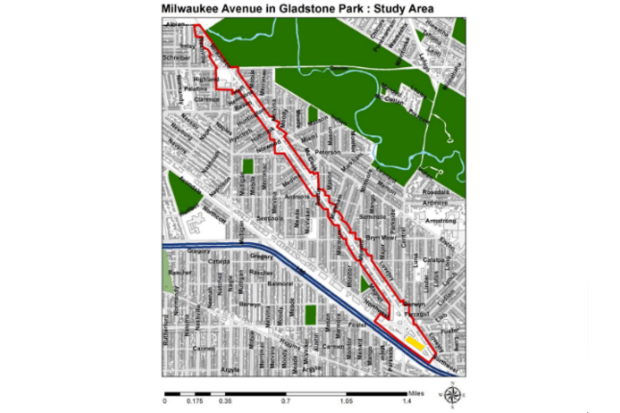 A city-commissioned study of the Gladstone Park corridor recommended "Allow[ing] new buildings up to four stories along Milwaukee Avenue. The site of the Full Circle Communities proposal is highlighted in yellow. [Gladstone Park Chamber of Commerce]

With seven floors, the apartment buildings proposed by developer Full Circle Communities — set for the southern tip of the commercial strip identified in the study — fly in the face of years' worth of collaborative planning, argued David Wians, president of the Gladstone Park chamber.

"We had countless meetings on this study over a two-year period, with stakeholders all over the community, including Ald. Arena, and everyone agreed we wouldn't exceed four stories," Wians said. "We've been very clear, before [the apartments proposal] even hit the light of day, that we didn't want this kind of [large building] in our community."

The 24-page study singles out the tiny triangle formed by Milwaukee Avenue, Foster Avenue and Northwest Highway, specifying that with the Jefferson Park Transit Center just a half-mile away, "a mixed-use development with residential may be appropriate."

And Benet Haller, the city planning department official who authored the document, wrote in a letter to neighborhood groups that one seven-story apartment building close to public transit "would not be out of character" with the study.

But that shouldn't erase the plan's agreed-upon clause to "allow new buildings up to four stories" along the strip, Wians said.

"On one hand this could create more customers, but you could just as easily do that with four stories," Wians said. "You have to consider the cost of what so [many units] would do to our schools, and our infrastructure."

Many residents — already opposed to the proposal and other large-scale housing complexes planned across Jefferson Park, for fear that they'd clog the neighborhood's streets and spoil its suburban atmosphere — have seized on the study's four-story recommendation as a new rallying cry.

A Facebook event for a protest being planned against the newest proposal urges participants to steer away from concerns over affordable housing, which were front and center at a Feb. 9 public meeting. Instead, the event description reads, "Any signage should be focused on themes such as '4 stories or less,' 'Honor the Gladstone Park plan' or 'We've been silenced.'"

The Gladstone Park Chamber's 110-plus members are "nearly unanimous" in their opposition to the Northwest Highway proposal, Wains said, though he didn't specify any business owners he knew to be against it.

But those opposed shouldn't count Chris Demos among their ranks.

"I have no problem with it, especially if it brings a lot more people in," said Demos, whose restaurant has sat at the corner of Foster and Milwaukee avenues since 1972.

"We've always had a really diverse crowd of people coming in and eating here," he said. "So having new kinds of people living around here wouldn't really affect us." 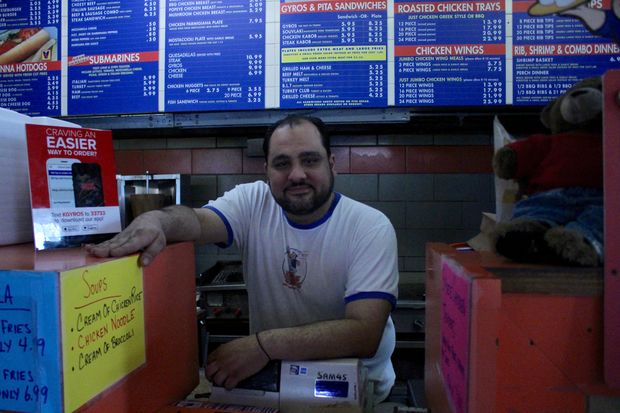 Demos isn't the only business owner who might reap the benefits of 217 new apartments at the fork of Milwaukee and Northwest Highway.

According to the "transit-oriented development calculator" administered by the nonprofit Metropolitan Planning Council, a development of the proposed building's size and proximity to public transportation would net an extra $502,400 in annual revenue for nearby retail shops.

And with Full Circle Communities tethering most of its tenants' rents to 30 percent of their income, the extra cash in their pockets would likely spill over into the business community, said Lindsey Haines, the group's vice president.

"Ensuring that residents aren't paying everything they earn on rent means that they'll have more money to spend at the grocery store, or could even go out to dinner once in a while," Haines said. "That stretch of Northwest Highway has some vacant buildings that are primed to be invigorated, and we hope our proposed project can be the first step toward that."

But zeroing in on businesses misses the point of why so many community members are against the housing proposals, said John Garrido, a board member of the Gladstone Park chamber who twice ran to fill Arena's aldermanic seat.

"I don't think any business owner would argue against more customers," Garrido said. But "I would think a business owner who cares about the community beyond a bunch of walking dollar signs would oppose such a project."