MOUNT GREENWOOD — A 13,000-square-foot horse-riding facility at the Chicago High School for Agricultural Sciences was approved Thursday by city planners.

The metal building is expected to be built on the the northwest corner of the campus at 3857 W. 111th St. in Mount Greenwood. The zoning change was submitted by Ald. Matt O’Shea (19th) on April 15, 2015 on behalf of the Chicago Board of Education, according to a report from the Chicago Plan Commission.

The school won $100,000 in an online contest Dec. 10, 2014. The prize was meant to fund a portion of the barn construction. The total project will cost $1.6 million and be privately funded, according to the plans.

A 13,000-square-foot horse riding facility was approved Thursday for the Chicago High School for Agricultural Sciences in Mount Greenwood, according to the city's Plan Commission.
View Full Caption
DNAinfo/Howard A. Ludwig

School officials declined to further comment on the project.

The one-story metal structure with a metal roof will not be more than 25 feet tall. It will have two circular riding areas but no seats inside, the plans say.

"The majority of the funding for the project was raised by the school community itself including a grant awarded from a private company," the plan says.

Indeed, Maggie Kendall, a teacher at the school, applied to be part of the contest through Farmers Insurance's Thank a Million Teachers program.

Kendall's proposal sought to use the new arena to boost the therapeutic riding program offered at the school. This program allows students with physical and cognitive disabilities to interact with large animals. 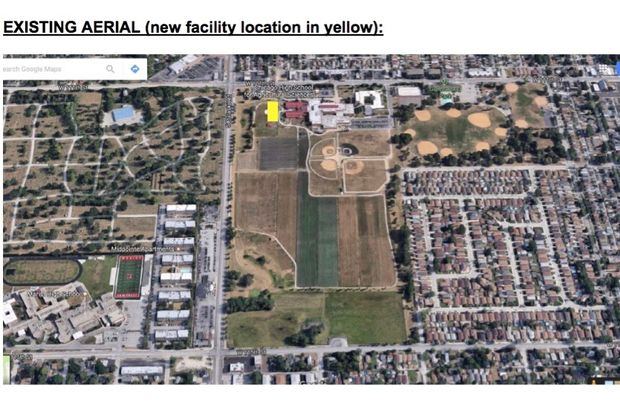 A new riding barn will be build on the the northwest corner of the campus of the Chicago High School for Agricultural Sciences in Mount Greenwood, according to drawings submitted to the Chicago Plan Commission. [Supplied Illustration]

She expressed interest in partnering with Special Olympics Chicago as well as Horses For Heroes — which works with returning military veterans.

The indoor arena is also meant to serve as an extension of the classrooms at the Ag School, allowing students a chance to work with animals regardless of the rain, sleet or snow.