Jenner, Ogden Parents Talk It Out At Merger Forum

GOLD COAST — Parents at Jenner Academy of the Arts and Ogden International School finally got their chance Wednesday to tell CPS how they really feel about the proposed merger between their seemingly disparate schools.

The public forum at Ogden's elementary school was the first of three meetings Chicago Public Schools will host this spring before further considering a merger between Ogden, a K-12 school with one campus in the Gold Coast and another in West Town, and Jenner, a neighborhood K-8 school in Cabrini-Green.

CPS said it has closed and consolidated schools in the past, but never before has it merged and maintained two existing schools at the behest of parents.

"These are two distinct cultures and two distinct communities," said Patrick Payne, a regional portfolio planner for CPS. "We want to make sure we're respecting those cultures."

Principals of the two schools first proposed a merger last school year in an attempt to solve Ogden and Jenner's contrasting enrollment problems. Ogden reports overcrowding at its neighborhood elementary school in the Gold Coast, 24 W. Walton St., while Jenner's building seven blocks away at 1119 N. Cleveland Ave. is so under capacity it was nearly closed by CPS in 2013.

Ogden's student body is relatively affluent and is one of the most diverse in the entire school district. Conversely, 98 percent of Jenner's students are black and live in low-income households.

Supporters view a merger as an attempt to integrate Chicago's de facto segregated schools. But opponents are skeptical that a merger would do anything to solve Ogden's overcrowding problem as more developers build high-rises in their school boundaries.

"If we’re looking at moving toward a political, social justice issue, CPS needs to take the lead and make it a citywide issue, not an Ogden-Jenner issue," said Paul Jensen, an Ogden parent. 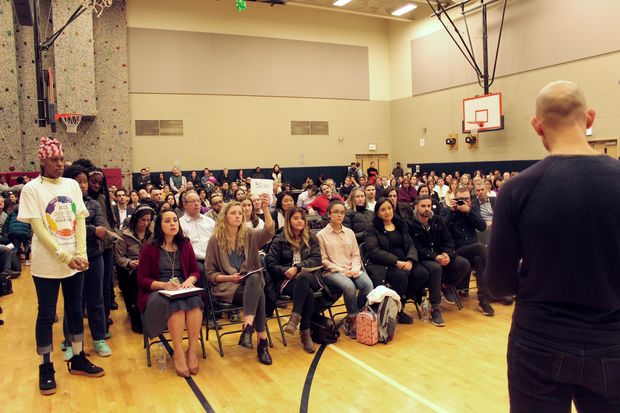 A timekeeper tells an Ogden parent he has 30 seconds left to speak during Wednesday's forum. [DNAinfo/David Matthews]

The merger has been controversial since it was first introduced. Some parents are worried that a combined Ogden-Jenner school with three campuses in three different neighborhoods would be hard to manage. Others are concerned a merger will impact Ogden's test scores and academic reputation. Teachers at both schools are wondering who will keep their jobs should Ogden and Jenner merge.

The forum not only brought out students and parents, but religious leaders, aldermen and others who have taken interest in the merger.

Dharma Seda Gonzalez, a junior at nearby Walter Payton College Prep, said she collected 285 signatures — representing about a third of Payton's student body — in support of the merger.

"The last Cabrini-Green high-rise closed in 2011," she said. "A lot has changed in the last six years, and this merger will provide us all with an opportunity to change our mindsets and begin to value integration."

Ald. Walter Burnett (27th), who grew up in Cabrini-Green and graduated from Jenner, said Jenner students "know how to embrace other people." Many Jenner families lost their homes when the Cabrini-Green homes were demolished. Then new families moved into the neighborhood.

"These young people had to deal with change a lot," he said.

But it was the parents who brought the most impassioned pleas.

Concepción Prado, a single parent with children at both of Ogden's campuses, said it is "not physically possible" for a parent to drop off and pick up her children every day at three different schools.

Candice Warltier, an Ogden parent, is worried a merger will mean job cuts at Ogden.

"Students could be [caught] in that fallout and I don't want it to happen to my girl," she said.

Ashley Linzy, who has a son in first grade at Jenner, said she just wants "CPS to have an open mind."

David Hundley, an Ogden parent who lives in West Town, said his family could have moved to the suburbs like many others did for seemingly better schools years ago. But his family didn't, solely because they believe in the societal benefits of an urban upbringing.

"For me, what my son learns and what the curriculum is is not nearly as important as the community he lives in and what he learns to be," Hundley said. "A homogenous community with homogeneous ideas with an insular point of view is not something I want for my son."

The proposed merger would begin during the 2018-19 school year.

For Proposed Merger, 'Help Us to Help You,' Jenner Official Says to Ogden