Chris Kennedy Tours Ag School, Says It Could Be Model For Schools Statewide

MOUNT GREENWOOD — Chris Kennedy toured the Chicago High School for Agricultural Sciences Monday and said the Mount Greenwood school could be used as a template for others statewide.

Kennedy, the son of slain U.S. Sen. Robert F. Kennedy and a gubernatorial candidate, made the comments after visiting with students, teachers and even a newborn piglet. He said the state is flush with jobs in agriculture, and Ag School students are pre-qualified for such positions.

"Why wouldn't you want to replicate this in every major city in Illinois?" Kennedy said. 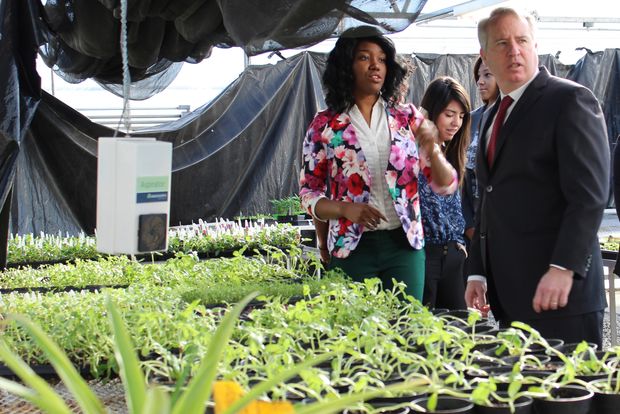 Brittney Kee, a horticultural sciences teacher at the Chicago High School for Agricultural Sciences, takes gubernatorial candidate Chris Kennedy on a tour of the school's greenhouse. [DNAinfo/Howard A. Ludwig]

Kennedy, 53, announced plans to run for Illinois governor last week. He previously ran the Merchandise Mart and is developing Wolf Point on the Chicago River. He is also the chairman and founder of Top Box Foods, a nonprofit organization that provides affordable, healthy food to Chicago neighborhoods.

"I decided to go into the food industry to be part of the anti-hunger movement," said Kennedy, adding that Top Box sells boxes of fresh meat, produce and other items at 40 percent less than grocery stores.

The idea is to help bring food to the working poor and others who might not be served by food pantries. Thus, there's no income restrictions placed on customers. The boxes of food cost between $15-$36. Customers order their boxes and pick them up at various locations including churches, public housing sites and elsewhere throughout the city and suburbs.

"Our customers don't see themselves as recipients of charity. They are buying their food," said Kennedy, who includes himself among the Top Box customers. 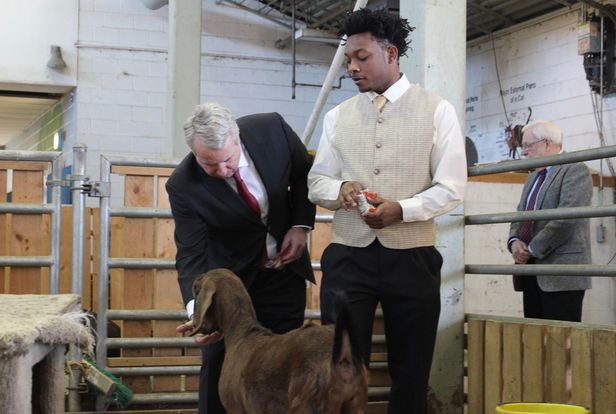 Kennedy's presentation served as the launch for the 14th annual Ground Hog Job Shadow Day at the school at 3857 W. 111th St. Seven students had already performed their job shadows at the Top Box warehouse and shared their experience with fellow students.

Eventually, all 340 juniors and seniors at the Ag School will be paired with an employer as part of the job shadow effort, said to Marc Schulman, the president of Dunning-based Eli's Cheesecake.

Schulman helped to launch the job shadow program. Past participants also include the Illinois Department of Agriculture, PepsiCo, Wells Fargo and others, said Sheila Fowler, an assistant principal at the Ag School. 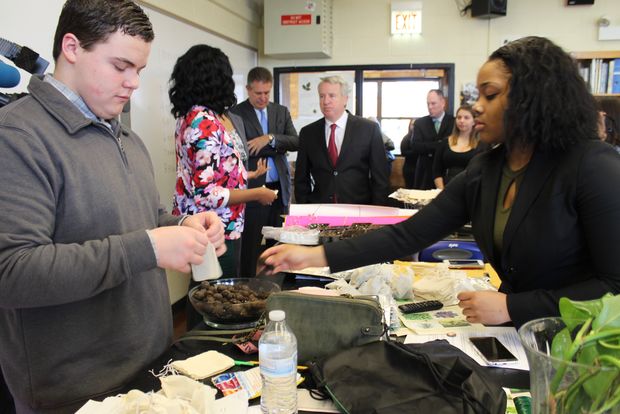 "We are not a school where you work in a book, and we send you on your way when you are done," said Principal William Hook. "This is how you guys learn from freshman year on."

A resident of north suburban Kenilworth, Chris Kennedy is the eighth of Bobby and Ethel Kennedy's 11 children and nephew of former President John F. Kennedy. Born on July 4, 1963, he was just 4 years old when his father, former attorney general in the Kennedy administration, was slain by Sirhan Sirhan in 1968 while running for president.

He and his wife, Sheila, have four children.