RIVER NORTH — SafeHouse, a spy-themed restaurant replete with trap doors, secret passageways, and plenty of other tricks, is about to blow its cover Downtown.

The River North outpost of the beloved Milwaukee restaurant could open by the end of the month inside the AC Hotel at Rush and Ontario streets, local managers say.

The SafeHouse coming to 60 E. Ontario St. is bringing many of the vintage charms of the Milwaukee restaurant, which first opened in 1966. But managers here say the new bar is definitely more "modernized."

Like the Milwaukee bar, entry requires a password. Guests who don't know the password will be ordered to don a costume or perform a silly human trick by "Agent M," the bar's host. Human tricks include imitating a bowl of spaghetti (easier than it sounds) or some other pantomime.

Guests are then led through a secret passageway downstairs to the restaurant, which assigns out 10 little "missions" in exchange for favors like free appetizers, drinks, or a discount off the total bill. The missions are akin to a scavenger hunt, and fun little booby traps abound throughout the bar. 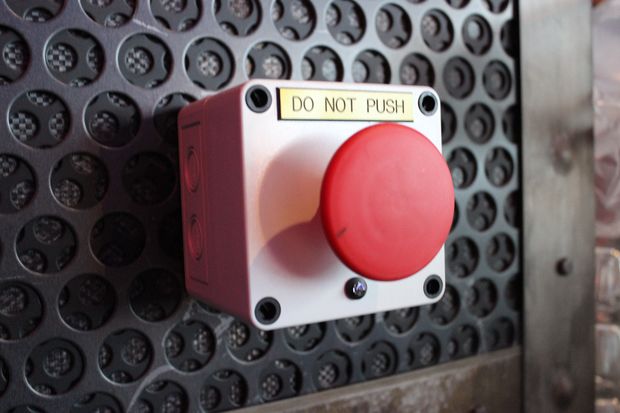 Obviously you're going to push this. [DNAinfo/David Matthews]

The menus have yet to be finalized, but SafeHouse will serve classic American fare such as burgers, ribs, and Wisconsin cheddar curds. The bar will serve specialty cocktails, eight beers on tap, 25 other brews in cans and bottles, and 12 different wines by the glass, Ayala said. The restaurant seats about 250 people.

SafeHouse will be open from 11 a.m. to 2 a.m. daily, and till 3 a.m. on Saturday. The bar will have a dance floor, a "boiler room" for a friend you can roast during a special occasion, and a "seductive lounge" that might host burlesque shows on Sundays, Ayala said.

Guests can also see magic tricks at SafeHouse's "gadget bar" adorned with a jetpack and flamethrower, a "stealthy selfie" photo booth with backdrops from across the world, and a "drone reconnaissance center" that plays aerial footage from around the globe on demand. Memorabilia from James Bond movies and other spy lore are placed throughout the bar.

SafeHouse is owned by Milwaukee-based Marcus Corp., which owns hotels, restaurant franchises, and movie theaters across the country. Agent Blonde, a manager from Milwaukee overseeing the Chicago SafeHouse opening, said the spy theme has resonated so well with customers for so long because it allows guests to immerse themselves "in a different world."

"It allows you to be someone else," said Agent Blonde, who wouldn't reveal her true name.

A SafeHouse spokeswoman said the restaurant could announce its opening date as soon as next week.