Mount Greenwood, Esmond Schools To Get $40 Million In New Construction

First, Mount Greenwood Elementary School will see an addition built on the southeast corner of its campus. It will give the school capacity for 1,300 students and will include 11 new classrooms, an art room and additional bathrooms, according plans provided by the Public Building Commission.

A new lunchroom will also be built in an existing building and a new playground and parking lot will replace the modular buildings at Mount Greenwood Elementary, the plans said. 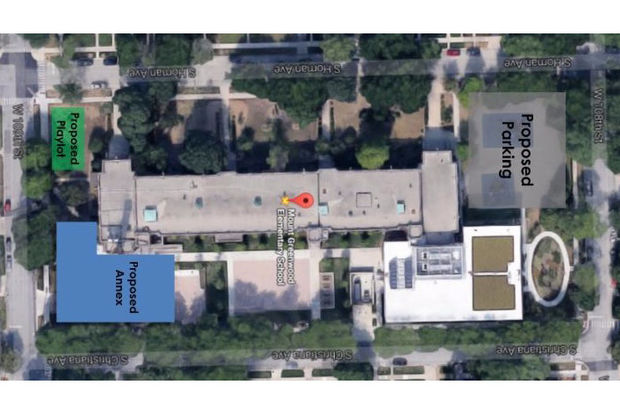 An overhead shot of Mount Greenwood Elementary School shows where the new addition will be built on the campus at 10841 S. Homan Ave. [Supplied]

Esmond Elementary School in Morgan Park will also receive a new addition to its campus at 1865 W. Montvale Ave. This new building is meant to replace another structure that was added to the school in 1971 and long surpassed its projected 20-year life span, Ald. Matt O'Shea said.

"Every time I walk through the door, I cringe to look at this big, ugly, unsafe building that your children and grandchildren come to everyday," said O'Shea, who was flanked by Emanuel and Esmond Principal Angela Tucker.

The old building will be torn down once construction is complete. It will be replaced by a new turf field. Meanwhile, Esmond's addition will include two new classrooms, a science lab, computer lab, library, lunchroom, kitchen and additional restrooms. 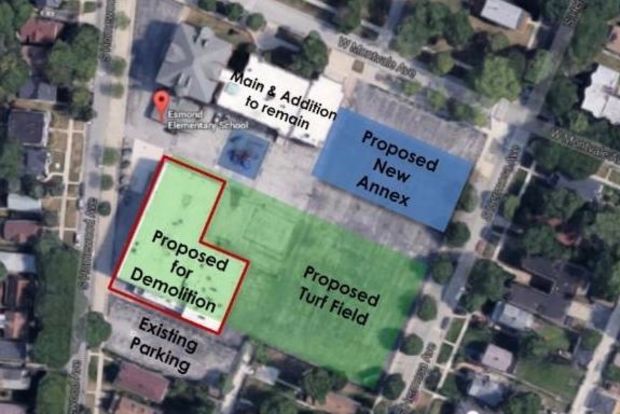 An overhead shot of Esmond Elementary School in Morgan Park shows where a new addition will be built as well as a new turf field. An existing building will also be torn down. [Supplied]

The other existing buildings at Esmond will also receive new roofs, windows and tuckpointing. Several classrooms will also be upgraded, and the current buildings will also see changes aimed at improving the school's accessibility.

Esmond actually has the opposite problem of Mount Greenwood School. It's too big. The building has a capacity for 840 students, according to Chicago Public Schools. But much of this unused space is falling apart, according to an aldermanic staff member.

Replacing the worst of Esmond's buildings with a smaller annex reduces the capacity of the school to about 400, thus shielding the current student body of 319 from future school closures, O'Shea said in an email to constituents Saturday.

"There is no school in the 19th Ward that has a greater need than Esmond School," O'Shea told a crowd of parents, students and others who gathered for the announcement. 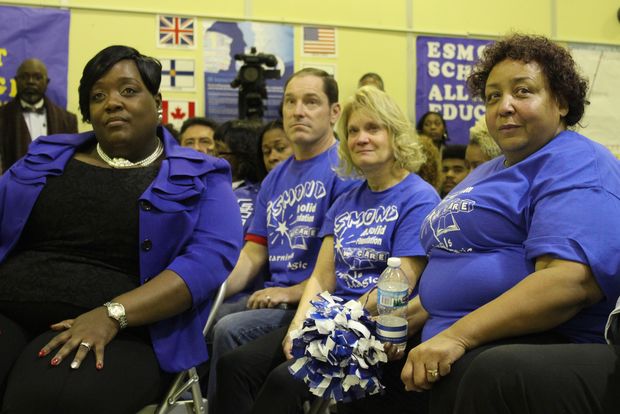 Principal Angela Tucker (left) looks on with her staff as the news of a major renovation to the campus at Esmond Elementary School in Morgan Park is announced. The school at 1865 W. Montvale Ave. has 319 students. [DNAinfo/Howard A. Ludwig]

The cost of both projects will be about the same, according to the staff member. Many of the details aren't finalized, but site preparation will begin at both schools immediately, according to information provided by the building commission.

That will be followed by a period of planning and design and then seeking bids for the work. Those pre-construction steps are likely to take upward of 1½ years. Then construction on both projects is expected to take roughly a year, according to the building commission.

Mount Greenwood Principal Catherine Reidy vowed to push the process along quickly. Her school at 10841 S. Homan Ave. is built for 990 students but has more than 1,100 children enrolled this year.

Reidy said she expects the student population to continue to increase in the coming years. Already, Mount Greenwood Elementary has had to eliminate pre-school, conduct art on mobile carts and offer speech pathology in a closet behind the auditorium.

Next year, the students will lose their library and computer lab, O'Shea said.

So Reidy has no doubt the new building will be filled to capacity when it opens. Meanwhile, both O'Shea and Emanuel commended Reidy as well as the parents and staff at Mount Greenwood Elementary for their contributions.

"Families are moving to this community to be within the boundaries of Mount Greenwood Elementary," O'Shea said. "We have parental engagement here that you don't see at other schools." 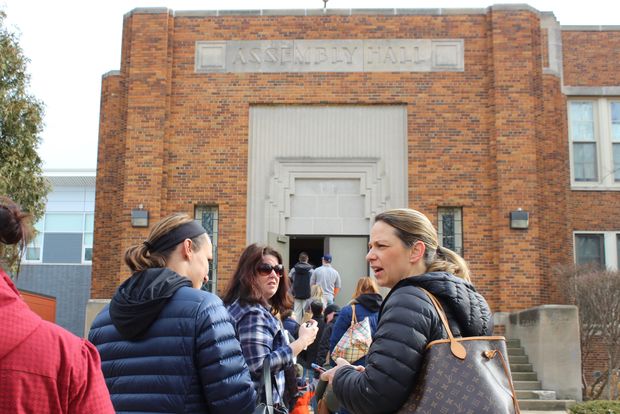 Parents line up to enter the auditorium at Mount Greenwood Elementary School Saturday. Roughly 300 people filled the school to hear news of a new addition on the southeast corner of the campus. [DNAinfo/Howard A. Ludwig]

He also gave a nod to Tucker and the involved parents at Esmond. He pointed to the school as a safe haven in the neighborhood, as children living nearby frequently congregate on the campus both before and after the final bell has rung.

News of the plan was kept close to the vest. Reidy said she called parents 24 hours ahead of the Emanuel's arrival asking them to come. Parents at Esmond received a post card earlier in the week inviting them to attend the announcement that included Mexican dancers, a video game truck, face painting and a pizza lunch.

The latest plan follows a controversial effort by O'Shea that involved merging Kellogg and Sutherland schools in Beverly, moving the Keller Regional Gifted Center out of Mount Greenwood and creating a dual campus for Mount Greenwood Elementary. That plan was ultimately scrapped on Oct. 10.

News of the construction plans also comes on the heels of citywide cuts announced Monday. But O'Shea said funds for school construction and school operations pull from separate pools of money. 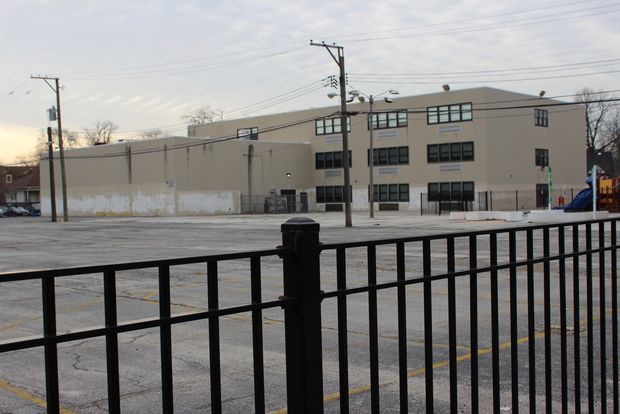 A large building built in 1971 will be torn down at Esmond Elementary School in Morgan Park as part of a $40 million school construction effort in the 19th Ward. Mount Greenwood Elementary School will also receive a large addition. [DNAinfo/Howard A. Ludwig]

None of that seemed to matter Saturday in the multipurpose room at Esmond. Loud music filled the air, including a stirring live rendition of "The Star-Spangled Banner." Local School Council member Tammy Halbert of Morgan Park also read a poem.

"Today is a great day at Esmond. The place where Eagles soar," Halbert said in part of her poem.