JEFFERSON PARK — Two weeks worth of pent-up rage and anxiety spilled into the open Thursday night as hundreds of Jefferson Park residents packed a church to lambaste 45th Ward Ald. John Arena's plan to build a 100-unit mixed-income housing complex in the heart of the neighborhood.

The plan, drawn up by developer Full Circle Communities and unveiled on Jan. 26, calls for a seven-story L-shaped building at 5150 N. Northwest Hwy., the site of a former food distribution center facing the intersection of Milwaukee and Foster avenues. It would be built next to a self-storage facility operated by Life Storage, which owns the entire parcel.

Of the 100 units, 80 would be rented below market rate and tied to tenants' income levels, with 20 to 30 units set aside for CHA voucher holders. The developer has vowed to prioritize veterans and people with disabilities for about half the units, all across the income spectrum. 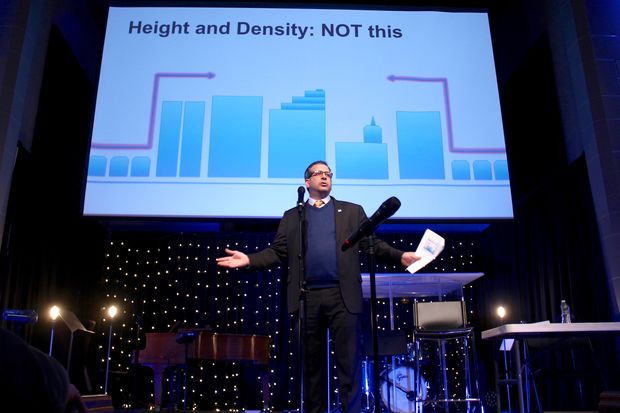 The Jefferson Park proposal immediately sparked a backlash among a broad segment of residents already opposed to Arena's cultivation of large-scale housing complexes in the area. The Jefferson Park Neighborhood Association, a thorn in Arena's side since he started pushing the series of projects, launched a petition against the development that had surpassed 2,600 signatures by Thursday.

In a frenzied two-hour public meeting Thursday at the Branch Community Church, 6125 W. Foster Ave., residents mercilessly heckled Arena and took turns slamming the proposal as a towering magnet for crime plunked in the middle of a peaceful, tight-knit community.

"This is a solid ward we've got here, and we pay a lot of money to live here," Dan Romaine called out to Arena from his seat. "There's no reason we should have to pack all this Section 8 housing into one building, right where we live." 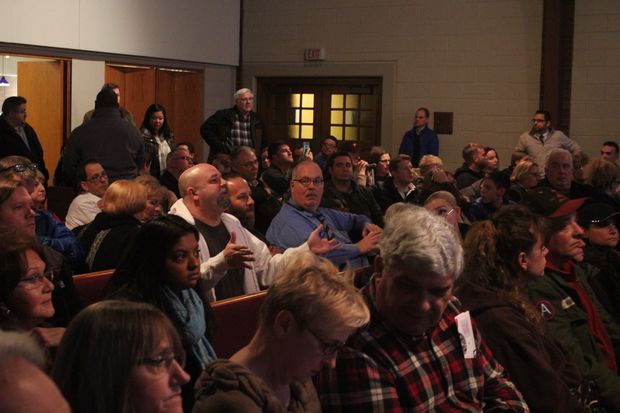 Dan Romaine speaks out against the proposal. [DNAinfo/Alex Nitkin]

The meeting was barely called to order before it descended into personal slights, accusations and vulgar name-calling, most aimed squarely at the alderman.

Meanwhile, the church walls rattled with the chants of hundreds of demonstrators — both for and against the proposal — who were turned away at the door after driving in from other parts of the city and rallied outside in the 20-degree weather.

Jefferson Park Police District Cmdr. Bill Looney sat perched in the church lobby while attendees in the sanctuary shouted, groaned and whooped at each speaker's turn at the microphone. The meeting was scheduled to last until 10 p.m.; Looney shut it down at 9.

Attendees aired a wide range of objections to the proposal, from the design of the building to its potential impact on overcrowded nearby schools, but most circled back to worries that poorer neighbors would bring the city's surging violent crime into Jefferson Park and burden the area's already overstretched police district. 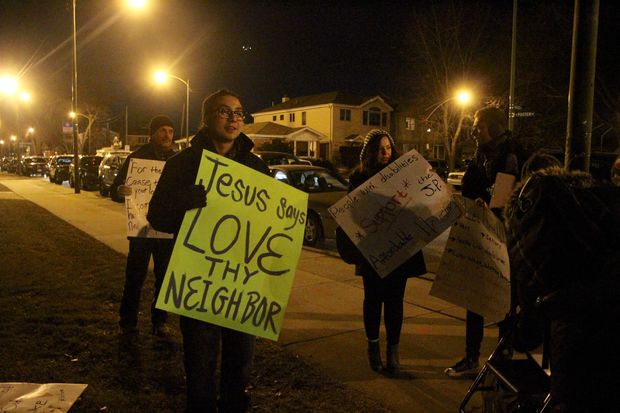 Outside the meeting, supporters and opponents of the apartments held dueling rallies. [DNAinfo/Alex Nitkin]

The developers, who would directly manage and operate the building, vowed to screen each potential tenant for past felonies and drug crimes, saying they'd turn away anyone without a spotless record.

But that didn't convince Melanie Fialkowski that the building wouldn't pose a threat.

"What ability do you have, if any, to prevent a renter from passing the screening process, and then bringing in every miscreant brother, uncle, cousin, son they have?" Fialowski said. "You can call us elitist ... but I call us homeowners. I've lived here my whole life, and if you think we're going to believe this building will only be for retirees and veterans, then you're crazy."

But for people with disabilities, subsidized housing is often the difference between having a safe home and living on the street, said Adam Ballard, who represents the disability rights group Access Living.

"Affordable and accessible housing for people with disabilities is almost impossible to find, so projects like this ... are rare," Ballard said. "I myself am able to work, but 70 percent of adults with disabilities don't work, or can't work, so there's no market for us. We have to live in developments like this." 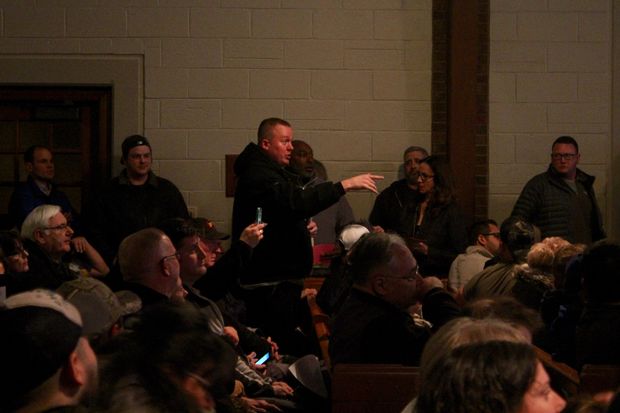 Some attendees, like Karel Munao, suggested the complex would be a better fit for more heavily trafficked areas, like the Six Corners shopping district in Portage Park.

"This building is way too big for its location — it's like trying to fit a size 11 foot into a size 9 shoe," said Munao, a member of the neighborhood association. "This is a dangerous intersection for someone in a wheelchair. There's exhaust fumes coming off the [Kennedy] expressway, and I just think it's heartbreaking that you're going to smash all these people into one little building."

Adding to the frustration for opponents like Munao was a broad expectation that Arena would charge forward with the proposal over his constituents' objections, as he has with some previous projects. The alderman has made no secret of his full-bodied support for the development, telling meeting attendees that there was "no popular-vote mechanism" for deciding whether he'd allow the project to go forward.

Arena defended subsidized housing throughout the meeting, hitting back against arguments that lower-income neighbors would burden the neighborhood instead of contributing to it.

"The folks who are low-income will buy sandwiches from the deli, just like you do," he said. "They have insurance, and they need medical services, just like you do. So I'm sorry, but it's not fair to judge someone who makes less than you do, as if they spent no money."

Full Circle Communities will solicit funding for the $30 million project this summer, representatives of the organization said. The developer is aiming to start construction in summer 2018, and to start renting out apartments by the following spring.

A spokesman for Arena said the alderman has not decided whether he'll hold another public meeting on the proposal. 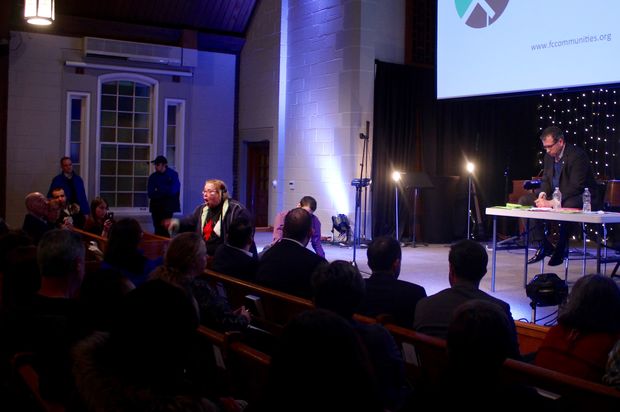