THE LOOP — Karin Hansen went to Harold Washington Library last week to fill out forms for her mother's nursing home, but the man on the computer next to her came to watch pornography.

"He said 'Yeah, I know, but there's nothing we can do about it,'" Hansen said. 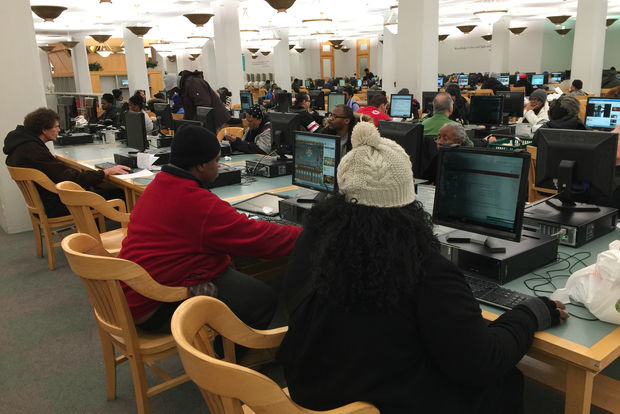 Guests use computers on the third floor of Harold Washington Library. The woman on the right is using a privacy screen filter. [DNAinfo/David Matthews]

And at Harold Washington Library, 400 S. State St., that conflict is pretty apparent.

What websites library guests can access has been argued in courts for decades, but in Chicago, the library system has mostly decided to regulate what people can do instead of what they can watch.

"While [libraries lack] the purview to monitor internet content, we reserve the right to intervene when a patron's activities on a library computer or personal device create a disruption that results in complaints from other library patrons," Patrick Molloy, a spokesman for Chicago Public Libraries, said via email. "Further, the police are contacted if and when such disruptions violate local, state or federal laws."

Internet guidelines are posted throughout Harold Washington Library, and guests see them again when they log on one of the computers on the library's third floor. The computers aren't walled off, but each one comes with a privacy screen filter that blacks out monitors from a distance. The filters can be removed.

Librarians don't monitor guests' search history, and the only forbidden content per the library's guidelines is child pornography.

"It's not my business what they look at," another librarian at Harold Washington Library said. "Some people read dirty books."

Librarians at Harold Washington — the library's flagship branch — say they can reassign someone to a new computer if they complain about what the person next to them is looking at. In the absence of lewd behavior, that's all librarians say they can do.

"The library should be a safe place for parents and children," she said.

Jamie LaRue, director of the American Library Association's office for intellectual freedom, has a simple remedy: "remind people to behave well in public."

Just as librarians can ask guests to start using their indoor voices, they can ask them to be mindful of what they're watching on their shared computer.

"It's the power of courtesy: 'I know you have a First Amendment right, but be polite, be thoughtful,'" LaRue said.