DOWNTOWN — Margot Smith, 7, and her mother cried together on election night.

"I just really wanted there to be a girl president," she said. "We've only had boy presidents for too long."

But on Saturday, she was exultant. Holding a hot pink "Dump Trump" sign alongside two of her school friends and their moms at the Women's March on Chicago, she did her best to match the slogans other marchers were chanting — even though she didn't understand all of them.

"It's been a challenge explaining all the 'kitty cat hats,' which everyone is calling something else," said Lena Parsons, who brought Margot to the march alongside her infant son and 7-year-old daughter. "But I thought it was so important to show them that they can come out and be safe with people who believe what they believe."

Parsons was one of thousands of protesters who carried their children, pushed them in strollers or held their hands as they marched and chanted Saturday. Many wanted their kids — who have spent most or all their lives in a Barack Obama presidency — to understand their voice had value, they said, and they wanted the kids to see they had people fighting for them. 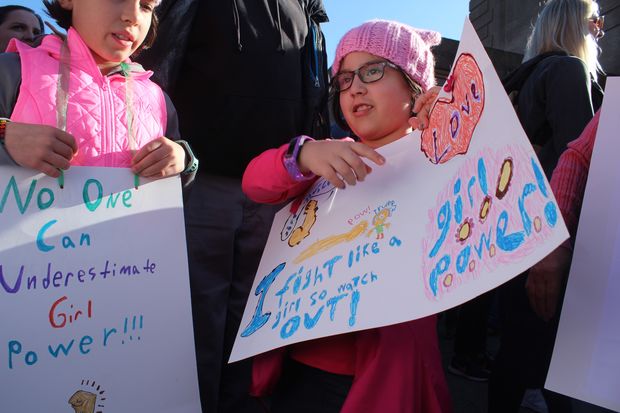 Cecilia de Santiago, 7, points to the sign she made for Saturday's protest. [DNAinfo/Alex Nitkin]

Omar McRoberts, of Bronzeville, came to the rally with his wife, daughter and son. His wife had helped with the march, McRoberts said, and they wanted to show people "frustrated with the incoming regime" that there were people standing in solidarity with them.

McRoberts wants his son, Sage, to know "that people when they care about things, they really do come out and support them," he said while 8-year-old Sage shyly stood back and looked around the rally. "And that struggle is for all ages. It's not just something [for] older people and adults, but young people, as well, need to be brought on board and into understanding of how important their voice is."

Somewhere in the middle of a massive swell of marchers carrying profanity-laden signs down Jackson Avenue, Josie Ryan, 5, was perched on her mother's shoulders with a sign of her own.

"She really loved Hillary [Clinton], and when she found out this was happening, she wanted to come so badly," said Dani Sher, from suburban Oak Park, who gripped Josie's legs as she waved her small white poster board.

The jumble of letters she'd written on her sign were a personal letter to Supreme Court Justice Ruth Bader Ginsberg, she said.

"She helped change a lot of things, and she's helped make things better for girls," Josie said, looking down at her mom. 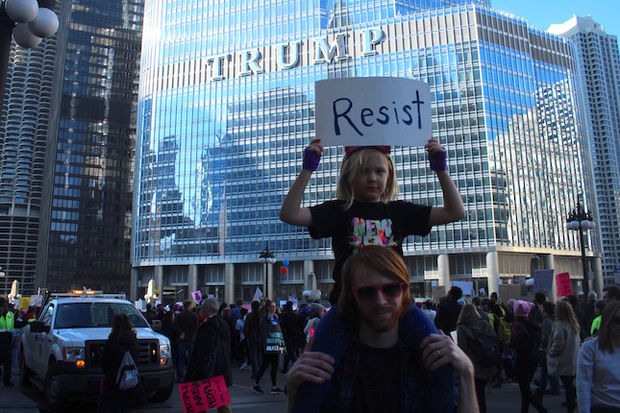 Emmeline Croisant, 6, sits on her father's shoulders at the Women's March on Chicago. [DNAinfo/Alex Nitkin]

Sher hoped Saturday would be a "character-building experience" for Josie, she said.

"I wanted to show her that if there's something on her mind, she shouldn't be afraid to say it and show it," Sher said.

Abigail Silva's two daughters, 7 and 10, drew their own signs too, both showcasing the words "girl power" drawn in crayon.

Silva hoped their arts and crafts and knitted pink hats would give them an early dose of democracy strong enough to stay with them their whole lives, she said.

"They're going to be able to vote soon enough, and they need to know that their vote matters," Silva said. "It's a big world out there. They have to know they have a place in it."

Watch a group of young protesters chant during the Women's March on Chicago:

Jill Hallett, of Dunning, wants her 2-year-old daughters, Casey and Cora, to grow up and be "whatever the h--- they want to be," she said, laughing. She brought her daughters to the rally in a stroller and stayed with them until the end of the event.