CHICAGO — It took months of bounced checks and a week of vendors ripping equipment off the walls for employees of Bow Truss Coffee Roasters to walk off the job, according to several employees of the Chicago coffee chain.

As many of them are now contending with unpaid bills and unemployment, some workers have issued a public plea for help through a crowdfunding campaign.

Others are holding out hope that an investor with deep pockets will revive Bow Truss and make good on the money they are owed.

The payroll issues came to a head last week, when workers at all 10 locations refused to open for business. The protest was in response to payment issues happening so frequently that some workers now have a permanent 10-day hold on all bank deposits, one employee said.

"We love our customers and staff so much, we're super tight-knit, but we can't take [CEO Phil Tadros] anymore," store manager Krystal Smith said. "He's the only reason we're all in this boat."

"It's so much worse than I think anybody has ever known," said Smith, who managed the Bow Truss at 900 W. Van Buren St.

Tadros did not deny last week that he'd struggled to pay employees for months, saying "that's why we were looking for help," which he expected to get from Marcus Lemonis, a entrepreneur and reality TV show celebrity who had thrown his hat in the ring to buy the chain from Tadros.

Tadros said the "most profitable" Bow Truss cafes will reopen soon, with the the Loop location, 190 S. LaSalle St., back open Thursday.

"Wholesale is still roasting coffee and delivering to our amazing partners," Tadros said Wednesday evening. "Retail [locations] will have a rebirth, slow and steady, with a better focus on taking care of our profit centers so we can take better care of our people."

But Lemonis, who once promised to take over the coffee shop chain, has made an about face, saying he sees "no path" forward in his proposed Bow Truss buyout.

Begging for a buyout

Meanwhile, employees like Smith are begging him to reconsider.

"This is the best group of people I have ever worked with," Smith told DNAinfo of her Bow Truss colleagues. "They're dedicated, hardworking people, and they're all being completely screwed out of their jobs right now."

On Wednesday, a number of employees said they deliberately did not tell Tadros about their plan to walk off the job after losing faith in the coffee chain's ownership.

"We, the staff of Bow Truss, recognized that the company's problems are the result of his mismanagement of finances and the brand at large," the employees said in a statement. "We believed that the only chance for a successful future for Bow Truss could not include Tadros or his team."

At least six co-workers drafted the statement with input from the entire staff, one said.

READ THE FULL STATEMENT FROM BOW TRUSS EMPLOYEES BELOW

In the week since the Bow Truss cafes closed, employees said many of them remain unpaid and disillusioned about Tadros' ability to turn things around.

Some of the Bow Truss baristas have launched a crowdfunding campaign through Generosity, an Indiegogo offshoot focused on charitable, "socially conscious" giving.

"Many [employees] are students or have made the company their full time occupation and live paycheck to paycheck," the campaign page reads. "Every dollar will be used to help those with overdrawn bank accounts, unpaid bills and rent."

The workers said Tadros has asked them to return to work, promised cash payments and "pleaded for faith."

"Because of his response, most of us have given up hope that Bow Truss will ever return," the employees said. "As such, we have diverted our attention toward reclaiming what we can in terms of wages and rights."

But still, they say they are "truly grateful" for the community of employees, customers and roasters brought together by Bow Truss in its heyday.

"Many of us come out of this time feeling supported due to the indescribable outpouring of love and support provided by the Chicago coffee community," they wrote. "Unfortunately, the continued failure of Tadros to act in the best interest of his staff has made the prevailing impression upon our lives a negative one."

Red flags from the start

There were red flags from the start, she said.

Her Near West Side store still had the King's Baker Cafe sign out front from the storefront's previous inhabitant.

She tried to sign up for direct deposit, but was told Bow Truss didn't use the system yet. Every pay period, a few employees would have their paychecks bounce, she said.

"Sometimes it was just a couple people, but they never had money to make payroll," Smith said. "It's a pretty common occurrence, and all we get from Phil or accounting is, 'Hey, sorry for the inconvenience, here's money for the bank fee.'"

Meanwhile, Tadros was planning to double the size of his coffee empire, growing to 10 locations with plans for at least seven more.

"We're the ones on the store level who have had to deal with this," Smith said.

"They had to bring in a drill and take everything," Smith said. "None of the stores have mats or anything from Cintas anymore."

Regional managers then had to buy and distribute towels so the stores could operate, she said. For months, she said she's had to pay cash for milk delivery orders or face running a coffee shop without dairy products.

The upper-level management met at the company's roastery and came to an agreement.

"They talked about how they're not getting paid and we aren't, so why come into work?" Smith said. 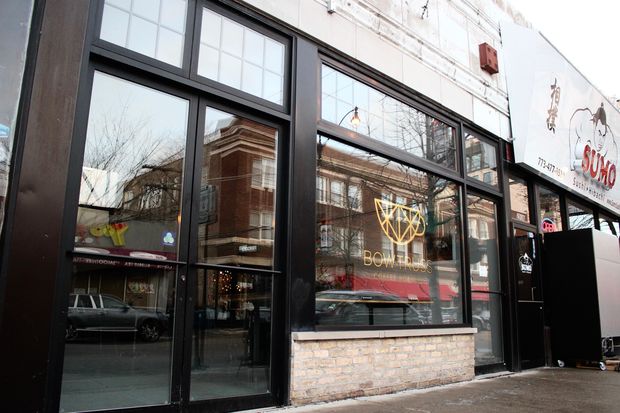 The 10 Bow Truss locations in Chicago, including this one in east Lakeview, were closed last week after employees walked out on the job. [DNAinfo/Ariel Cheung]

Tadros and Marshall scrambled, offering cash payments for anyone who would come to work, she said.

"I hope you do not think being short of funds is a character issue of having capital and not funding," Tadros wrote to his employees in an email provided to DNAinfo. "I've been fighting for staff and payroll since I was 19 and I've never had as difficult a time as now."

"We would never let this lapse if we had the money," he wrote.

From bad to worse

In July, Crain's Chicago Business exposed a trail of lawsuits, failed businesses and upset investors involved with Tadros. One month later, the CEO was charged with domestic violence, although the case was later dropped when the victim did not appear in court.

Bow Truss workers were again not paid Jan. 7 and refused to come to work as a result, as first reported by Crain's. The chain then announced it was "taking a time out until things are refocused and on track," Tadros said last week.

Tadros said Lemonis "has the means to pay the bills" that Bow Truss owes to turn things around. In the meantime, Tadros says he's "in talks with several people that [are] look[ing] to help." He said the employee walk-off was a temporary setback, but employees dispute that the nonpayment was a one-time issue.

Smith said her Near West Side cafe was the first to close Jan. 11. She and the location's baristas explained the situation to customers, Smith said.

"We decided to send the message that we're not going to work for free any more and hang in there and hope that what he tells us will be true," Smith said.

Most employees are now hoping that Lemonis will still find a way to take control of the company and give Tadros the boot.

"If Marcus buys the company, I think there's a good chance people would be really excited to come back," Smith said.