Sen. Christine Radogno and Rep. Jim Durkin, Springfield's Republican leaders, introduced a bill Thursday that would allow a sale of the postmodern state office building in the heart of the Loop.

Rauner said in a statement that such a sale would save taxpayers hundreds of millions of dollars, not just in sale proceeds, but costs maintaining the 17-story building built in 1985.

The bill is a second attempt to sell the building, which Rauner called "ineffective," "inefficient" and "in disrepair" when he first announced his plans in 2015. That proposal died in the Democrat-controlled Illinois General Assembly, according to Crain's, which first reported Rauner's renewed effort to sell.

Now, like anyone who's ever struggled to sell a home, Rauner is staging the site to give potential buyers a better idea of what they're getting into. Thursday's announcement came with a conceptual study by Adrian Smith + Gordon Gill Architecture, the Chicago firm that soon will be responsible for designing three of the four tallest buildings in the world.

The study shows what the Thompson Center site would look like with three new towers, or just one standing 1,700 feet tall, or more than 200 feet taller than Willis Tower (if spires don't count). 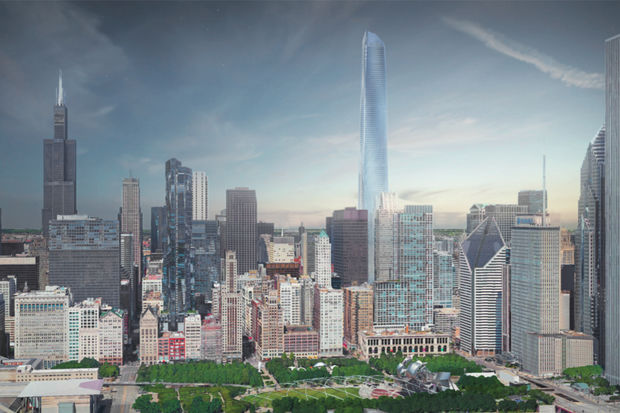 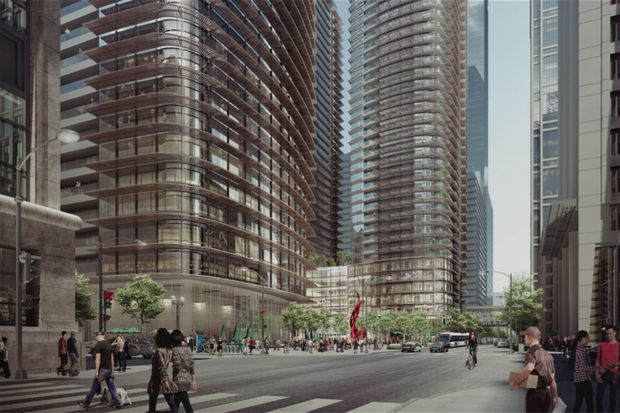 A spokeswoman for Smith + Gordon Gill declined to comment.

The Thompson Center, named after former Gov. James R. Thompson, opened in 1985 and is known for its shiny dome designed by architect Helmut Jahn.

Jahn has said that subsequent state administrations have failed to maintain the building. In 2015 he pressed Rauner to rehab rather than raze the Thompson Center.

"This requires upgrades to the retail and food service, marketing the large floor plates to innovative tech companies, adding parking ... [and] adding 24-hour uses: a hotel, apartments or condominiums; in short, making it the most exciting place in the city with around-the-clock activity," Jahn said.

A sale would net $220 million, Rauner's office estimates, and make the $326 million tab for deferred maintenance on the building unnecessary. A new development on the site could pay up to $45 million in new property taxes.

Smith's renderings are conceptual only, and Rauner's plans are once again subject to approval from the Illinois General Assembly. The last building taller than 1,700 feet proposed in Chicago was the Spire, which was never built amid the ensuing recession.