BEVERLY — Na'imah Johnson's red velvet cupcakes are as sweet as her smile.

Both likely played into the 11-year-old Barnard Elementary School student becoming a contestant on Season 5 of "MasterChef Junior," which debuts at 7 p.m. Feb. 9 on Fox-32 Chicago.

"It's a very good show. It's exciting, and I think this season is going to be a great one," Na'imah said Monday.

Na'imah is among 40 chefs invited to compete on the show, all between ages 8-13. The field will be cut in half after the first two episodes. From there, one or two contestants will be eliminated each episode.

The final winner receives $100,000 and a trophy, though Na'imah and her family declined to say how she faired in the competition, which has already been taped. The other Chicago competitors are Charlie Hans, 9, of Edgebrook, Evan Robinson, 10, of Hyde Park and Avani Shah, 8, of River North.

"We have been watching the show since Season 1 of 'MasterChef Junior,'" Na'imah said. "I liked how there were kids about my age."

Na'imah said she auditioned for the show over the summer. After finding out she made the cut, the family traveled to Los Angeles for the taping, said Rheanna Johnson, Na'imah's mother and a Chicago Public Schools teacher. 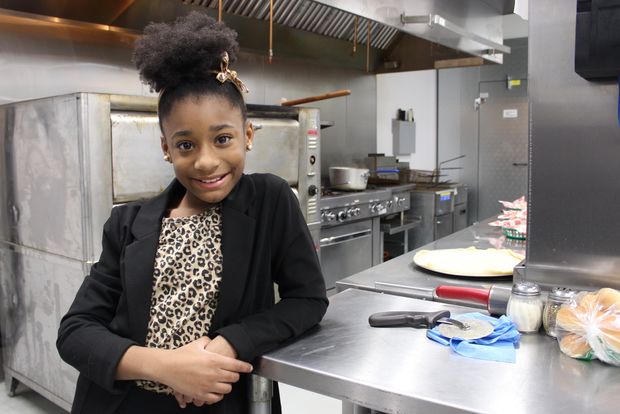 Na'imah Na'imah Johnson of Beverly traveled to Los Angeles last year for the taping of Season 5 of "MasterChef Junior," which debuts at 7 p.m. Feb. 9 on Fox-32 Chicago. [DNAinfo/Howard A. Ludwig]

"I was surprised, but I was happy at the same time," Na'imah said of the successful audition in which  she cooked for producers.

Perhaps she shouldn't have been so shocked, as she and her sisters — Na'ilah, 13, and Nuriyah, 8 — are also the proprietors of Naninu Batter Cakes. Their 16-year-old brother Nasir is the taste tester for the home business.

The girls bake cakes, cookies and pies under their mother's watchful eye. They often sell their baked goods at Na'imah and Nuriyah's school at 10354 S. Charles St. in Beverly or at Progressive Baptist Church in Bridgeport.

Their father, Jamal Johnson, is the youth pastor at the church at 3658 S. Wentworth Ave. And a viewing party for the season premiere will be held nearby from 6-8 p.m. Feb. 9 at Razzmatazz Family Fun Center at 3900 S. Ashland Ave. 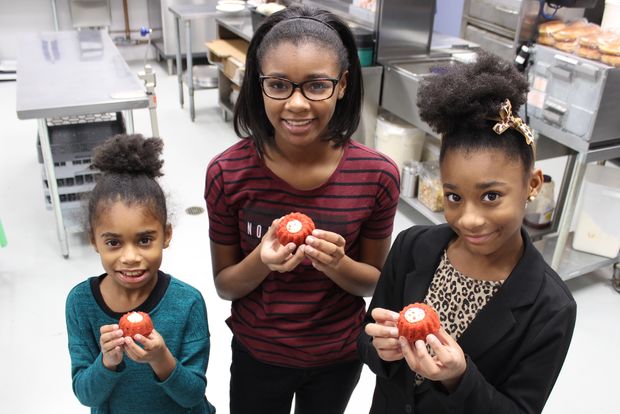 From left Nuriyah Johnson, 8, Na'ilah Johnson, 13 and Na’imah Johnson, 11, all work together in the kitchen under the watchful eye of their mother, Rheanna Johnson. The girls are the proprietors of Naninu Batter Cakes, a home-based bakery. [DNAinfo/Howard A. Ludwig]

The show's judges include chef Gordon Ramsay and chef Christina Tosi. Rheanna Johnson, a Morgan Park High School grad, had hoped chef Graham Elliot would be part of the panel.

Elliot is a Morgan Park resident and former "MasterChef Junior" judge. Rheanna Johnson had hoped her daughter might enjoy a bit of a hometown edge over the other contestants with Elliot. But Na'imah Johnson said the judges were all nice — even Ramsay, who has reputation for being difficult.

"During the taping, he is not very nice. But when you are just meeting him, he is very nice off-camera," she said.