It's also where, on a fateful summer night more than 40 years ago, López Rivera's group detonated sticks of dynamite in a spate of Downtown bombings that injured five.

The decision by President Barack Obama on Tuesday to reduce López Rivera's 70-year sentence — and Miranda's reaction — show that time in the eyes of some can heal all wounds, no matter how explosive their cause.

López Rivera — who once lived in Humboldt Park — is revered today as a mentor by U.S. Rep. Luis Gutierrez (D-Ill.) and exalted as a hero by local activists.

But in the 1970s, the Fuerzas Armadas de Liberación Nacional, or FALN, a group fighting to overthrow the federal government, was decried as extremist by officials combating scores of bombings that scared Americans across the country and killed six in New York. In the Chicago area alone, the group targeted busy sites such as the Merchandise Mart and Woodfield Mall.

"It's a very, very unfortunate thing for the city," then-Mayor Jane Byrne said after a 1979 FALN bombing of the Cook County Building in the Loop. No injuries were reported.

Five were injured on June 7, 1976, when FALN planted bombs outside prominent Chicago locales, including the John Hancock Center and the former Chicago police headquarters at 11th and State streets.

Another target? The corner of Monroe and Dearborn streets, right next to the theater now showing "Hamilton."

"I'll have you know this is the first time I've been to the Loop in a couple of years," Alan Markovitz, a victim, told the Tribune as he left an emergency room "carrying a bloody shirt and wearing blood-stained pants." 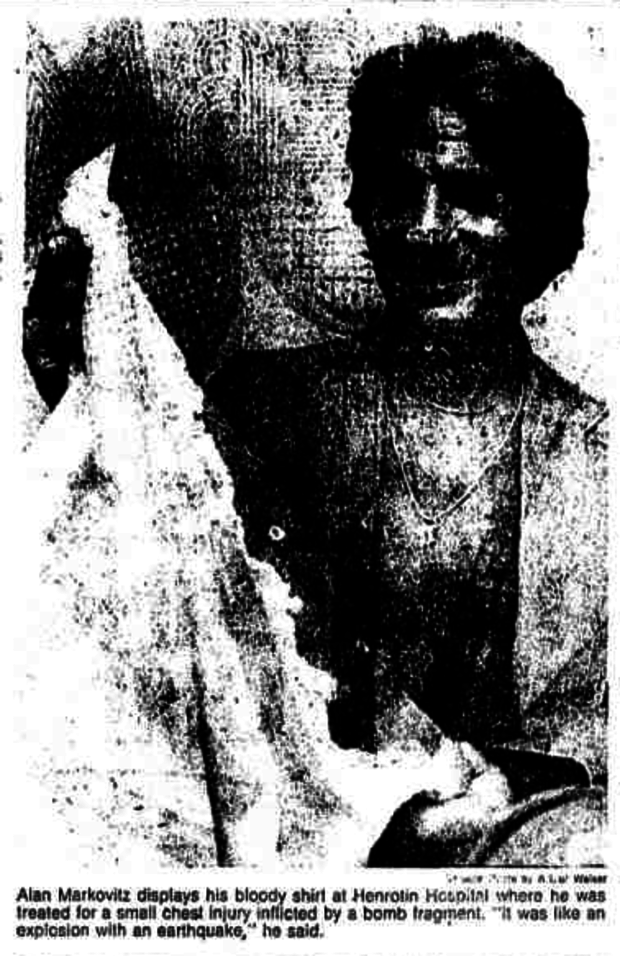 Markovitz holding his bloody shirt for the camera in 1976. [Tribune Archives]

Markovitz and his mother had just seen Leonard Nimoy star in a production of "Sherlock Holmes" at the Shubert (now PrivateBank) Theatre, 18 W. Monroe St., when a bomb exploded in a trash can on the corner. Markovitz was punctured in his chest by debris and temporarily deafened by the blast. His mother, Lee, was treated for shock.

"It was an awful gust of stuff," Albert Ross, another witness, told the Tribune. "There was a man lying on the sidewalk and his arm was bleeding. Another man — his chest was all blood. I didn't see anybody running from it."

The bomb exploded at 11 p.m., right as the crowd was leaving the theater. No injuries were reported at FALN's other targets that night. López Rivera was never convicted for specific FALN attacks, but in 1981 was sentenced to 55 years in prison on federal conspiracy charges. The court added 15 more years in 1988, when he was convicted of conspiring to escape from prison.

Now the theater is in the news for selling out shows for "Hamilton," a hit musical about America's fight for independence that stars actors of color. López Rivera, 74, was described by an Obama administration official to the New York Times as someone who'd served nearly half his life in prison and was no longer a threat to society.

Y @MMViverito, when you talk to Don Oscar, díle I've got a show for him in Chicago. It'll be my honor to play Hamilton the night he goes.
🇵🇷

López Rivera is set to leave prison in May, more than 30 years ahead of schedule. Spokespeople for "Hamilton" did not return messages seeking comment.

Pedway Map: Where To Eat, Drink & Shop in the Loop Without Going Outside

Obama Urges 'Grab A Clipboard ... Run For Office': Here's How To Start