By Howard Ludwig |&nbspJanuary 17, 2017 3:05pm
@howardaludwig
Twitter Facebook Email More
The Rev. Thomas Mulcrone will retire June 30 as chaplain for the Chicago Fire Department. He will remain active as a priest and continue to minister at St. Mary of Providence in Streeterville.
View Full Caption
Courtesy CFD Media

PORTAGE PARK — The Rev. Thomas Mulcrone plans to retire June 30 as chaplain for the Chicago Fire Department after three decades on the job.

Mulcrone, 65, said he didn't know why he wasn't asked to take another assignment by the Archdiocese of Chicago. After all, most associate pastors are reassigned every 5-7 years, and parish priests typically move after 12 years, he said.

"Nobody bothered to ever ask," Mulcrone said about his prolonged tenure as chaplain — an assignment originally slated for just three years. His replacement has yet to be named.

Mulcrone will remain a priest and continue to minister at St. Mary of Providence. He resides on the grounds of the Catholic facility that serves women with developmental delays at 4200 N. Austin Ave. in Portage Park. 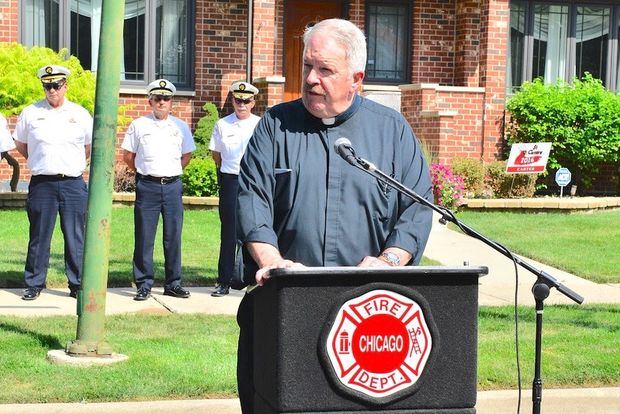 The Rev. Thomas Mulcrone will soon give up being on call 24 hours a day for the Chicago Fire Department. He plans to retire June 30 as chaplain. [Courtesy CFD Media]

Hailing from law enforcement family, Mulcrone will soon give up being on call 24 hours a day for the fire department. He added that he's seen 20 line-of-duty deaths in his time as fire department chaplain.

"Sadly, I've had to ring too many doorbells in the middle of the night," he said. "A little piece of your heart and soul is ripped out when your brother falls."

Among the many lessons he's learned on the job is that there are no words to say when consoling a grieving family. Instead, it's better to good listener than a good talker in such situations, Mulcrone said.

The heartfelt letter from Mulcrone details his desire to retire while in good health and concludes, "I have been and, God willing, will continue to be the luckiest priest in Chicago – all because of you."

More than 300 comments follow the letter, mostly from firefighters wishing Mulcrone well in retirement. Many of the messages talk of baptisms and weddings that the fire department chaplain presided over. Others simply thanked him for his friendship.

"I think Fr. Tom realized that a cup of coffee at the kitchen table at the firehouse was the most powerful tool in the box. He has been there for every member of the department that needed him," said Bill Sullivan, a director of the widows' and children's fund.

Eileen Coglianese is president of the Chicago Fire Department's Gold Badge Society. The group is comprised of the families of firefighters and paramedics who have lost loved ones in the line of duty.

The group was founded Feb. 17, 1991, and Coglianese said it was Mulcrone who suggested it.

"Though his ministry, he realized that people who are grieving and suffering a loss — they have a lot to share and everyone can benefit," she said.

Coglianese also pointed to Mulcrone's sense of humor as a way he connected with firefighters and their families. She added that his religious capabilities were always available upon request but never forced upon anyone.

Chicago firefighters held Mulcrone in high regard as a result and some "didn't even want to get married unless he could say the wedding," Coglianese said.

For his part, Mulcrone described his life's work as catering the needs of "a big parish on wheels." He said he'll miss the men and women of the fire department and said the greatest lesson he learned over the years is embodied in their work.

"Giving of yourself is the greatest gift you have to give," he said.