By Linze Rice |&nbspJanuary 13, 2017 5:53am | Updated on January 14, 2017 8:50am
@linzerice
Twitter Facebook Email More
The tower at 451 E. Grand Ave. is influenced by the Palmolive Building and other prewar buildings. Here's a rendering of the tower at night.
View Full Caption
Related Midwest; Robert A.M. Stern Architects

DOWNTOWN — Building is booming in Chicago.

According to the estimated costs developers submitted to the city when applying for building permits, the top six permits alone add up to more than $1 billion in new (or soon to be) luxury residential and commercial high-rises and entertainment venues.

The Downtown trend toward ultra high-end real estate has some worried, while others have argued the high prices attract more wealth to the city.

Check out the six projects developers spent the most money building in 2016, according to city data.

One Bennett Park, 451 E. Grand Ave.: The most expensive new construction project in 2016 was the One Bennett Park, whose developers spent $248,180,000 on the Art Deco tower in Streeterville. The luxury 67-story high-rise boasts 280 apartments and 69 condos with prices starting at $2 million. A 7,500-square-foot penthouse will go for abourt $15 million. Construction is expected to wrap up next year. 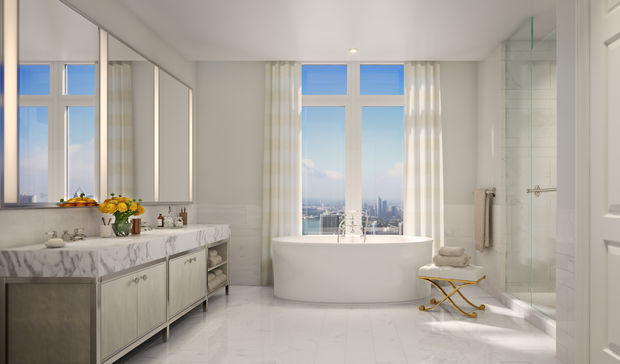 A view from the upscale bathroom of a unit in One Bennett Park. [Provided/Related Midwest]

Offices at 151 N. Franklin St.: About 300,000 square feet is still available at the 36-story office high-rise in the Loop. Developed by the John Buck Company and designed by renowned architect John Ronan, the building cost $238,495,000 over the course of 2016. Early on in the project's timeline, developers received some pushback from bird lovers, who were worried birds would be distracted and killed by the structure's "glazed" exterior look. The building offers some parking and retail shops on the ground level. Ronan is the architect behind the Poetry Foundation, the Obama presidential library and more.

The Sinclair, 1201 N. La Salle Drive: Construction costs rang in at $222,112,000 last year for The Sinclair in Old Town, a 35-story residential complex with 390 units, a ground-floor Jewel grocery store and parking garage with a rooftop pool. Developer Steven Fifield said the project is named after author Upton Sinclair and will be the "most luxurious" of his portfolio. The development has drawn some flak because it will block the well-known south-facing Richard Haas mural at a neighboring building. 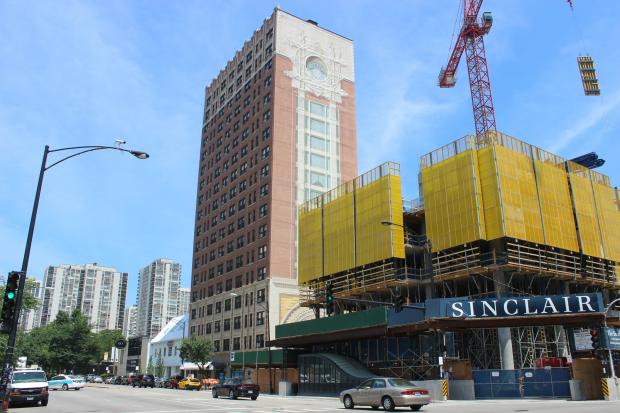 The lower portion of Richard Haas mural, depicting an arch from a building at the World's Columbian Exposition, will be obscured by the Sinclair Building. [DNAinfo/Mina Bloom]

Wintrust Arena, 200 E. Cermak Road: DePaul University's massive new indoor sports arena saw $150,005,000 in building costs last year and is set to open this year next to the McCormick Place convention center in the South Loop. The controversial development has been in the works since 2013, announced just one week before 49 public schools were shuttered that year. Millions used to build an adjoining Marriott hotel for guests at the entertainment venues were taken from tax increment financing districts near the arena. 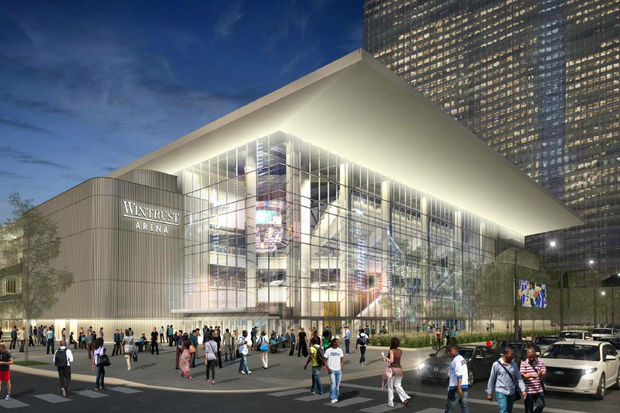 Residential and shopping at 508 W. Diversey Pakway: In August, developer Broder Diversey LLC got the green light for a $150 million, 12-story building with 53 units in Lakeview, which will include retail space on its ground floor as well as on-site parking. Construction is expected to end before next year.

No. 9 Walton, 9 W. Walton St.: A 71-unit, 35-story tower in the heart of the Near North Side is among a group of newer developments aimed at the ultra-rich Downtown. In 2016, $125,300,000 was spent on the project (along with another $35 million in 2015) which boasts a private wine cellar, pool and hot tub, covered dog run and its own chauffeur. Like other high-end real estate surrounding it, units are expected to sell in the millions.