DOWNTOWN — As gun violence "overwhelmed" Chicago, its police force routinely violated the civil rights of residents by using excessive force caused by poor training and nonexistent supervision, according to a sweeping federal investigation into the Chicago Police Department sparked by the fatal shooting of Laquan McDonald.

Outgoing U.S. Attorney General Loretta Lynch said the federal probe that covered 2012-16 found that the Chicago Police Department "engages in a pattern or practice of use of excessive force that violates the Fourth Amendment to the U.S. Constitution."

Those civil right violations are due to the Chicago Police Department's "severely deficient" training procedures, a lack of oversight and misuse of data that has led to an erosion of officer morale, Lynch said.

"Far too many communities suffer because of painful divisions between police and citizens," Lynch said. "The resulting deficit in trust and accountability is not just bad for residents — it’s also bad for dedicated police officers trying to do their jobs safely and effectively. With this announcement, we are laying the groundwork for the difficult but necessary work of building a stronger, safer and more united Chicago for all who call it home.”

"However, there is still considerable work to be done," Lynch said.

Emanuel signed an agreement Friday promising to negotiate a legally binding agreement — known as a consent decree — to ensure that reforms are implemented under the authority of a federal judge.

Assistant Attorney General Vanita Gupta, head of the Civil Rights Division, said the 13-month investigation — conducted by the largest team ever assembled by the Department of Justice — included hundreds of interviews and thousands of pages of documents.

Officers shot at people who posed no "immediate threat to officers" and used Tasers to shock people "for not following verbal commands," Gupta said.

That conduct endangers officers — and erodes the community trust that officers need to do their jobs, Gupta.

"Chicago's accountability systems are broken," Gupta said, adding that many complaints that should be investigated are not. "When investigations do occur, they are glacially slow and staffed by overworked and under trained investigators who often fail to obtain basic witness statements and evidence."

Officers are "too rarely held accountable for misconduct and discipline is unpredictable and ineffective," Gupta said.

The police department must do a better job tracking the use of force by officers, Gupta said, adding that the system by which officers are promoted must be altered to be fair and transparent.

Lynch and Gupta drew a direct line from the failures detailed in the 167-page report to the surge of violence that killed more than 730 people in the city last year — the highest tally since Chicago's poorest communities were ravaged by crack cocaine and violence in the ’90s.

The lack of police accountability leads to a "deadly cycle" of violence, Lynch said. 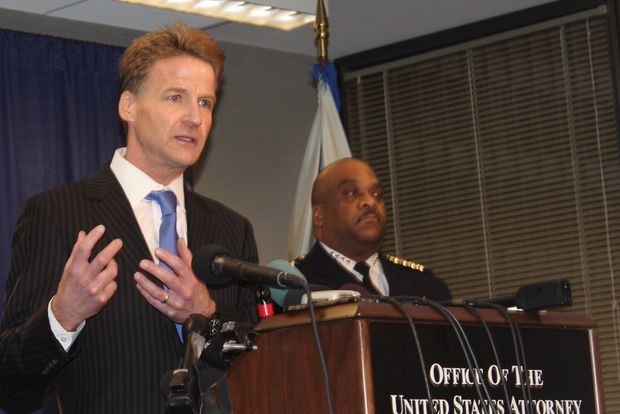 Zach Fardon, the U.S. Attorney for the Northern District of Illinois, said the report is "history making." [DNAinfo/Heather Cherone]

"The past year has been among the most brutal in Chicago memory," said Zach Fardon, the U.S. Attorney for Northern Illinois. "Gun violence has overwhelmed us. We have been thunderstruck with grief and heartbreak, fear and confusion, uncertainty and sadness."

Fardon said officers can't stop this violence without the support of the communities they're policing. 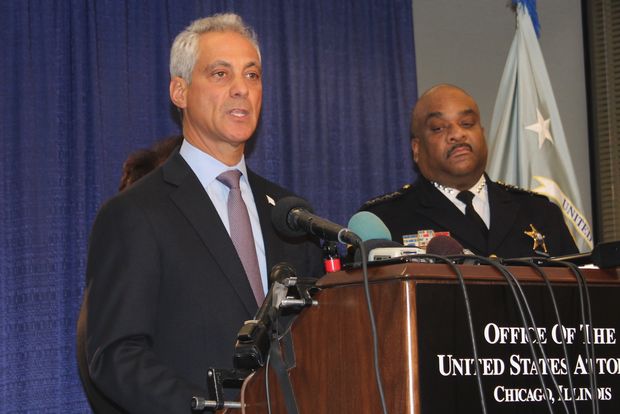 "If you feel it's OK to make a racist comment, it is not permissible," Mayor Rahm Emanuel said. [DNAinfo/Heather Cherone]

Emanuel said the report was "sobering."

"Misconduct will not be tolerated," Emanuel said."Our work is not done."

Johnson said the report was "difficult to read."

"We won't quit until we get it right," Johnson said.

Racism is not acceptable in the city of Chicago, Emanuel said. However, he declined to apologize for the wrongdoing detailed by the report from the Department of Justice.

Officers must live up to the oaths of office they take when they become a police officer, Emanuel said, adding that there is "no room for bigotry, racism or hatred" in Chicago.

"If you feel it's OK to make a racist comment, it is not permissible," Emanuel said, addressing officers. "And those individuals need to be held accountable for their statements."

Emanuel said the release of the Department of Justice report marks a "moment of truth for the city."

The mayor emphasized that many of the reforms outlined by federal officials were first suggested by officers themselves, the vast majority of whom are honorable.

"We need to support our officers and give them the resources to do their jobs as they have asked for in this report," Emanuel said. "We need to provide clear policies, consistent leadership and certainty across training."