BEVERLY — Greg Dix and Todd Thielmann promised not to make any drastic changes to Swanson's Beverly Ritz Catering and Deli.

That includes altering the recipe for the potato salad, chicken salad, cheese balls and other longtime favorites, said Dix, who began his career as a chef in 1987 at the deli at 2414 W. 103rd. St.

"We want to stay true to Swanson's roots," he said. "It's working. So, we are not going to try to change it."

The pair took over the deli on Dec. 28 and will move ahead on a few minor tweaks. For example, they will begin accepting credit and debt card payments in the coming days. They are also considering expanding the hours, adding free WiFi and further promoting the catering business. 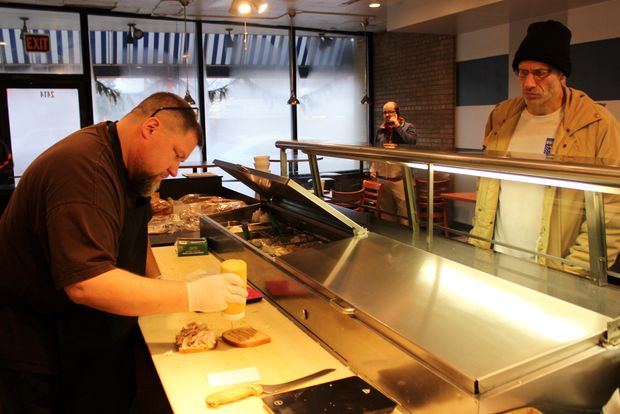 Greg Dix makes a sandwich for a customer at Swanson's Beverly Ritz Catering and Deli. Dix began his career in the food industry by working at the deli in 1987. [DNAinfo/Howard A. Ludwig]

"We hope to inject some enthusiasm," said Thielmann, who left his job at the Chicago Board of Trade for a spot behind the deli counter.

He and Dix first met years ago on the playground at Sutherland Elementary School in Beverly. The pair eventually parted ways as children but reunited in 1999 when they married Irish cousins. The two families eventually became neighbors in south suburban Palos Heights, Dix said.

"We've known each other for years," Dix said. "We have always had good times playing board games at our houses — events which often centered around food."

In fact, Dix has spent the bulk of his career working as a chef. He's worked at several notable hotels and restaurants including Disney's Grand Floridian Resort and Spa in Orlando as well as the Hyatt and Sheraton hotels downtown.

Locally, he helped open 115 Bourbon Street in south suburban Merrionette Park and worked at Maple Tree Inn, prior to the Cajun restaurant moving from Beverly to Blue Island. He also spent three years working in Bulgaria. 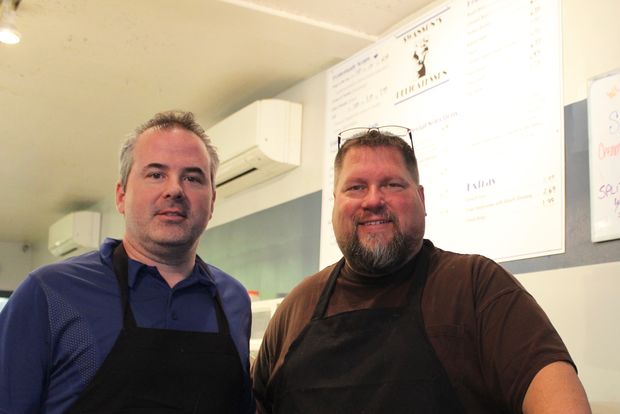 Todd Thielmann (left) and Greg Dix own Swanson's Beverly Ritz Catering and Deli. The pair have no plans to make any significant changes to the menu or alter the approach to the business. They are planning to add wireless internet and will soon begin accepting credit and debt card payments. [DNAinfo/Howard A. Ludwig]

Swanson's Deli went on the market while Dix was overseas. His mother, a Beverly resident and frequent customer, spoke to the owners, John and Tricia Rusch, who suggested her son buy the neighborhood business upon his return.

"Todd is good with money. I have the cooking experience," said Dix, a Morgan Park High School graduate.

That said, Dix and Thielmann also have a history in the kitchen — or more specifically behind the grill. The pair worked together as part of a competition barbecue team for several years, taking home a top prize for their homemade barbecue sauce in 2010. 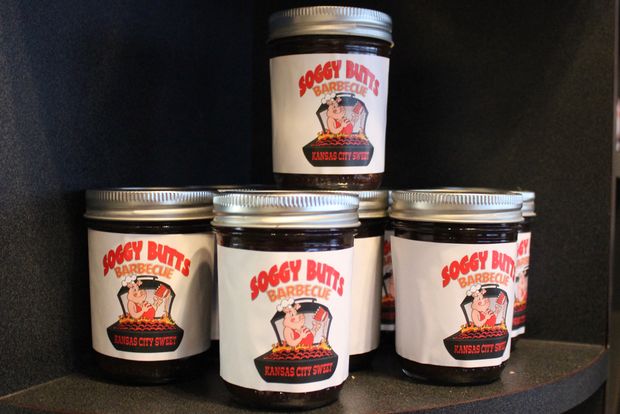 "We made sauce on a whim because we didn't like the other sauces out there. So we made our own," Thielmann said.

Soggy Butts Barbecue won first place in the sauce category at the New Palestine Wine, Brew & Bar-B-Que Too festival just outside of Indianapolis. Dix said the judges liked the sauce's combination of sweet and heat.

So instead of becoming an investor, Thielmann decided to join Dix as a partner in the deli. Though he and Dix both said they have no plans of converting Swanson's — which has operated as a deli for more than 60 years — into a barbecue joint.

"There's already a lot of rumors," Dix said. "We will do some barbecue, but we are not straying away from what it is right now."

The deal for the deli also included the building, which has an apartment above and a parking lot to the west. Dix and Thielmann said they are the third owners of the business.

Joan Madeja of suburban Orland Park stopped by the deli late Wednesday afternoon. She ordered a pound of potato salad, which she used to buy more frequently when she lived in nearby Oak Lawn.

"It's the best potato salad I've ever had," Madeja said.