SOUTH LOOP — The hopeful message Barack Obama rode all the way to the White House eight years ago is resonating again with a new generation of young voters.

Obama's farewell presidential address in McCormick Place drew old friends and longtime supporters Tuesday, but also many teenagers catching a glimpse of a historic president they were too young to vote for during his campaigns.

Obama, who again implored young Americans to make a difference in their communities Tuesday, left a mark.

"He's been a part of my childhood," said Nikil Badey, 18, who was in fourth grade when Obama was first elected president in 2008. "I grew up with him."

Obama, whose support among college students and other young Americans boosted his path to the White House eight years ago, offered his hope again for Millennials, who are now the largest generation in the American workforce and one of the country's biggest voting blocs.

"This generation coming up — unselfish, altruistic, creative, patriotic — I've seen you in every corner of the country," Obama said Tuesday. "You believe in a fair, just, inclusive America; you know that constant change has been America's hallmark, something not to fear but to embrace, and you are willing to carry this hard work of democracy forward. You'll soon outnumber any of us, and I believe as a result that the future is in good hands."

Obama's call for young people to believe in their "ability to bring about change" stuck with Erin and Maya Reynolds, two teenagers from suburban Highland Park who came Downtown to hear Obama speak.

Erin Reynolds, 19, is a sophomore at DePaul University who said she'll heed Obama's call to listen more, and not just to people with whom she agrees. She hopes doing so can help curb the poisonous perception of Millennials as spoiled, self-indulgent brats.

"It's something I've been thinking about ... to influence more than just people who agree with me," she said.

"It's listening and not just listening to what you want to hear," said her 18-year-old sister, Maya. 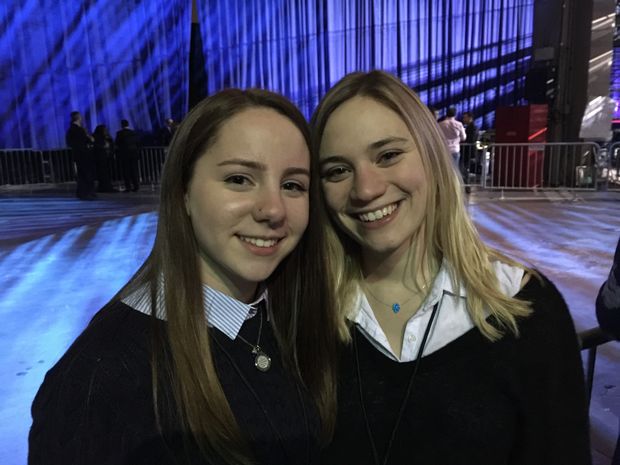 Obama's speech also drew responses from the peanut gallery of social media, which was quick to amplify or challenge Obama's farewell address.

One notable voice of dissent was Che "Rhymefest" Smith, a Chicago rapper who once unsuccessfully ran for alderman in a South Side ward near Obama's native Kenwood.

I'm not agreeing with @POTUS right now, he's not acknowledging systematic roadblocks as he tells people to just "change s---"

Idealism is good @POTUS hope is great, but our communities are worse off after the 1rst blk Prez then b4 you took office Why?

Obama's speech — which touched on his formative days as a South Side community organizer and the relationships he's made since — also drew appearances from longtime Obama allies including Mayor Rahm Emanuel and political advisor David Axelrod.

Austan Goolsbee, the University of Chicago economist who advised Obama during his presidential campaigns and served as chairman of the Council of Economic Advisers, said it was one of the more emotional speeches for him of the many he’s seen.

He said Obama’s personal notes about Michelle Obama and his friendship with Vice President Joe Biden really resonated with him.

“People don’t realize what good friends the Obamas and the Bidens really are,” Gooslbee said.

He said he wasn’t sure what was next for Obama after the presidency beyond working on his presidential library and the affiliated foundation.

“He’s a young man, there’s still a whole another chapter to his life,” Goolsbee said.

Obama Says Goodbye With Chicago In The Spotlight

Teens Given Tix By Generous Chicagoans Join 20,000 Others For Obama Rally