Obama Says Goodbye With Chicago In The Spotlight

"It is good to be home," Obama said as he took the stage to thunderous cheers and applause.

"I first came to Chicago when I was in my early 20s, still trying to figure out who I was, still searching for a purpose to my life," Obama said.

"It was in neighborhoods not far from here where I began working with church groups in the shadows of closed steel mills. It was on these streets where I witnessed the power of faith, and the quiet dignity of working people in the face of struggle and loss. This is where I learned that change only happens when ordinary people get involved, get engaged, and come together to demand it," he added.

Obama defended his record during two terms in office.

"If I had told you eight years ago that America would reverse a great recession, reboot our auto industry, and unleash the longest stretch of job creation in our history; if I had told you that we would open up a new chapter with the Cuban people, shut down Iran's nuclear weapons program without firing a shot, and take out the mastermind of 9/11; if I had told you that we would win marriage equality, and secure the right to health insurance for another 20 million of our fellow citizens — you might have said our sights were set a little too high," Obama said to raucous cheers.

But the president spent the bulk of the nearly hourlong speech delivering an impassioned defense of democracy, outlining three threats to the nation's civic fabric.

The first is the "stark inequality that is corrosive to our democratic principles," Obama said.

"And so we must forge a new social compact — to guarantee all our kids get the education they need; to give workers the power to unionize for better wages; to update the social safety net to reflect the way we live now and make more reforms to the tax code so corporations and individuals who reap the most from the new economy don't avoid their obligations to the country that's made their success possible," Obama said.

Obama acknowledged that the "talk of a post-racial America" after his election "was never realistic."

"Race remains a potent and often divisive force in our society," Obama said. "I've lived long enough to know that race relations are better than they were 10, or 20, or 30 years ago. You can see it not just in statistics, but in the attitudes of young Americans across the political spectrum. But we're not where we need to be. All of us have more work to do."

Obama defended the place of immigrants in American society, recalling the era when Irish, Italian and Polish immigrants faced discrimination.

"America wasn't weakened by the presence of these newcomers; they embraced this nation's creed, and it was strengthened," Obama said.

The third threat to democracy is "the rise of naked partisanship, increasing economic and regional stratification, the splintering of our media into a channel for every taste," Obama said.

"The peril each poses to our democracy is more far-reaching than a car bomb or a missile," Obama said. "It represents the fear of change; the fear of people who look or speak or pray differently; a contempt for the rule of law that holds leaders accountable; an intolerance of dissent and free thought; a belief that the sword or the gun or the bomb or propaganda machine is the ultimate arbiter of what's true and what's right."

He urged all Americans to get involved in the public life of the nation.

"Our democracy is threatened whenever we take it for granted," Obama said. "All of us, regardless of party, should throw ourselves into the task of rebuilding our democratic institutions."

Run for office if you are dissatisfied with politics, Obama said.

"If you're tired of arguing with strangers on the internet, try to talk with one in real life," Obama said. "If something needs fixing, lace up your shoes and do some organizing." 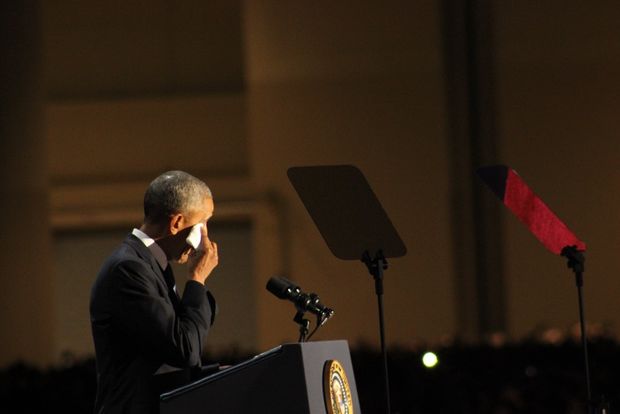 Obama wiped away tears after paying tribute to his wife, Michelle, who mouthed "South Side" as the president paid tribute to her roots.

"You took on a role you didn't ask for and made it your own with grace and grit and style and good humor," Obama said. "You made the White House a place that belongs to everybody."

Obama said he ends his presidency more optimistic than he began it and pledged to remain engaged in public life.

"I won't stop," Obama said. "In fact, I will be right there with you, as a citizen, for all my days that remain."

The president ended his speech with a riff on his famous 2008 campaign chant: 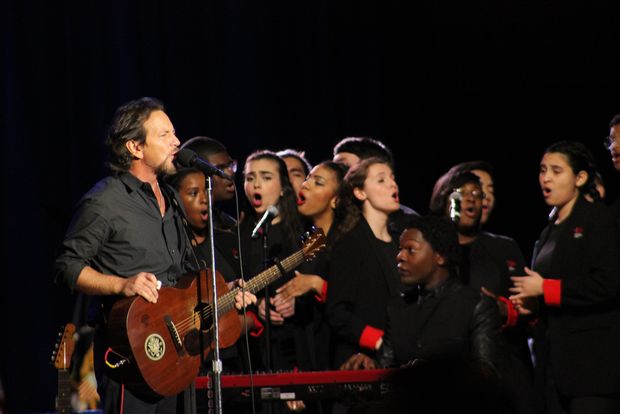 Before Obama took the stage, Pearl Jam lead singer Eddie Vedder took the stage with the Chicago Children's Choir, strumming a ukulele before picking up an electric guitar and playing a Chicago-themed version of the Neil Young protest song "Rockin In The Free World."

Thousands of Chicagoans and Obama supporters waited hours to get into the event that also served as a reunion for Obama campaign volunteers and staff.

Nicole Yates and Keidra King, two former Obama For America workers, drove more than five hours to be present for what they said was a bittersweet occasion.

"President Obama did a lot of good work, but this isn't the stopping point for us," Yates said.

Nikil Badey, 18, of Palatine was in fourth grade when Obama was first elected president.

"I grew up with him," Badey said, adding that he will miss Obama's humility the most. 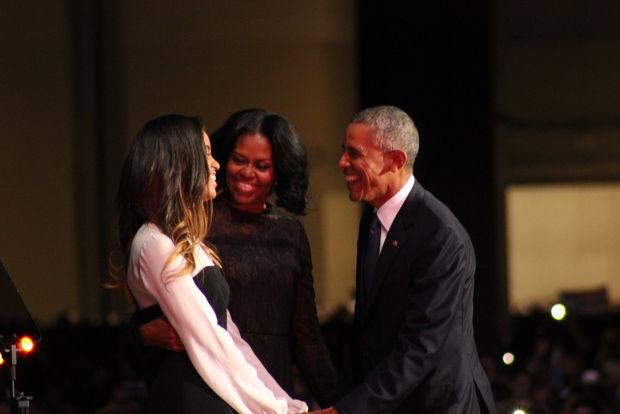