CHICAGO — If you weren't able to snag a complimentary ticket to President Obama's farewell address, you can still get a pass...but it will cost you.

Chicagoans who were lucky in line Saturday are already turning to Craigslist hoping to make some serious cash selling their ticket. The tickets, which were free to the public on a first come, first serve basis at McCormick Place, are being offered up for as high as $2500 per ticket on the site.

As stated on each of the free tickets handed out, the passes are complimentary and not for sale or re-sale and "tickets do not guarantee admission." But that hasn't stopped a handful of people from trying to profit online, many citing a dire need for money as the reason for resale.

A person selling two tickets said they waited in line from 3:30 a.m. outside in the cold until doors opened at 6 a.m., and waited an additional two hours to score their pair of passes.

Many resellers are only accepting cash payments, and one seller is attempting to make the transaction safer by requesting the trade happen in front of a police station. For those buying, each official ticket has on it a QR code and foil logo.

One person offered a more reasonable $50 for two tickets, the cost of their Uber ride to pick them up, after they realized they couldn't get out of work for Tuesday night's speech. That offer is no longer up on the Craigslist site. 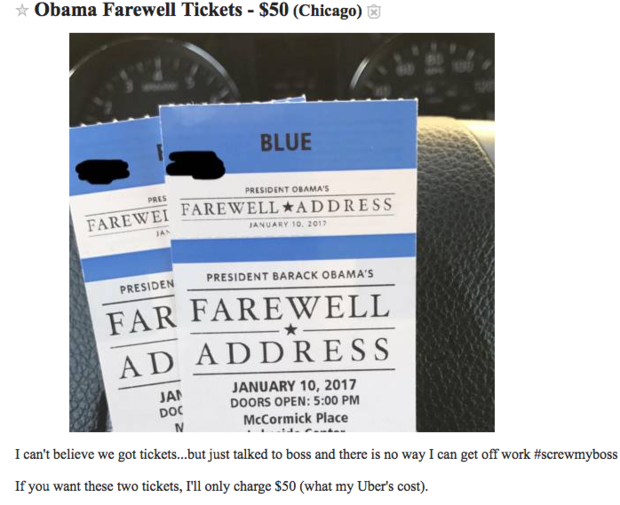 Prior to the release of tickets, at least one person attempted to hire someone to wait in line for them. The poster offered $25 for what they claimed would be "an easy in and out," and also suggested that if the person hired wanted to go, they could get in line again to grab a second ticket.

Given the high demand for tickets, that scenario would not have been likely, especially if the person hired lined up at 8 a.m., as the poster suggested, instead of the 6 a.m. time that was announced.

[A person offered $25 to anyone willing to get them a ticket to President Obama's farewell speech at McCormick Place. Photo: Craigslist]

Massive lines overtook McCormick Place as thousands waited in 3 degree weather in the pre-dawn hours for the free ticket giveaway, billed as the only way for the public to get into the Tuesday night speech.

McCormick Place tweeted at 6:56 a.m., less than an hour after crowds were allowed to start lining up, that the West Building was full and if people were not already in line for tickets, they would likely not be available.

Obama will head to Chicago Tuesday for his farewell speech, which will be a thank you to supporters and his thoughts on where to go moving forward.

The speech will start around 5 p.m. and stream live here.