DOWNTOWN — Chicago's skyline is going to look a lot different.

Construction has started on One Grant Park, the newly-named 76-story tower planned for the southern end of Chicago's premier park.

Once finished, the 792-unit apartment tower at 1200 S. Indiana Ave. would be the tallest in the city south of Willis Tower.

“To have the opportunity to bookend this remarkable open space is a responsibility that we continue to be aware of every day,” Rafael Viñoly, the project's architect, said in a statement Wednesday. “One Grant Park takes on the structural clarity, and the logic of purpose, that characterizes Chicago’s great high-rise building tradition.” 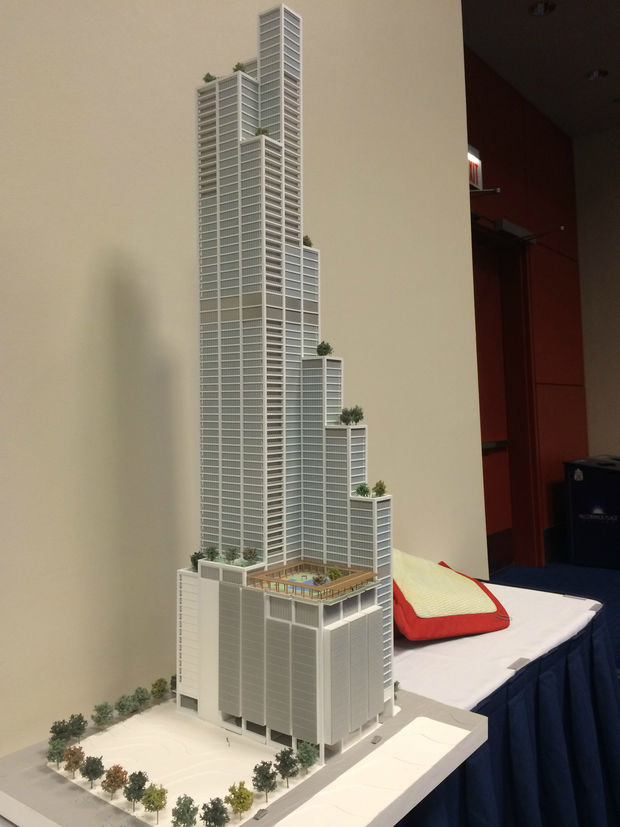 A model of One Grant Park presented to neighbors in 2015. [DNAinfo/David Matthews]

The tower is the shorter of two supertall buildings planned for the corner of Roosevelt Road and Indiana Avenue by Miami-based Crescent Heights, which acquired the property in 2012. Future plans call for a taller, 648-unit condominium tower on the western end of the site and a public park and 100 townhomes off Indiana.

The project is one of many high-profile additions coming soon to the South Loop, one of the fastest growing neighborhoods in the city. The Crescent Heights tower would be slightly taller than the 73-story Helmut Jahn skyscraper planned for 1000 S. Michigan Ave. New towers are also planned at 800 and 1326 S. Michigan Ave, as well as 1136 S. Wabash.

Crescent Heights told neighbors in 2015 that rents at the first tower would start in the "typical" luxury realm of about $3 per square foot. The city signed off on the multi-phase project in 2015, and Crescent Heights agreed to donate $100,000 each to Armstrong, Chicago Women's, and Webster parks as part of its agreement.

Viñoly said in 2015 that the towers would have a "stepping" gesture  inspired by Willis Tower.

Crescent Heights broke ground last month and has secured a $203 million construction loan. One Grant Park is expected to open in early 2019, according to a news release.