Maysick, a Pilsen resident, was hired by Bridgeport Coffee Co. about 1½ years ago. Owner Mike Pilkington began by teaching him the art of coffee, then showing him the business side of running a coffee shop.

Maysick was named manager of Bridgeport Coffee's shop at 9135 S. Western Ave. when it opened Dec. 14, 2015. The shop replaced the former Hardboiled Coffee Co. and joined Hyde Park and the South Loop as offshoots of the original Bridgeport-based coffee house.

But Maysick's passion for coffee has always been rooted in his desire to make doughnuts, he says. He even included a picture of his homemade doughnuts on his cover letter when applying for a job with Bridgeport Coffee. 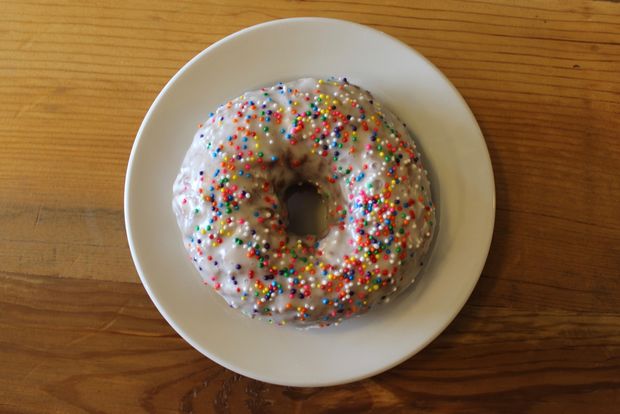 "The chocolate glaze — the way it is now — it took a few months to get there," said Maysick, a graduate of North Park University.

By August, Maysick said he'd pinned down the recipe for five varieties of cake doughnuts, including plain, cinnamon sugar, chocolate glaze, vanilla glaze and vanilla with sprinkles. His doughnuts cost $1.50 each or $1.65 with tax.

Maysick makes his doughnuts six days a week in Beverly and supplies all of the Bridgeport Coffee Co. locations. He also sells his doughnuts at the Sola Cafe inside the Lutheran School of Theology at Chicago and Open Produce both in Hyde Park.

Front Room Donuts are also sold at the Nitecap Coffee Bar in Pilsen. Sales peak on Saturdays, when Maysick said he sells about 13 dozen doughnuts at his locations throughout the city.

"I am in no rush to open more spaces. Right now, the overhead is low, and it is a good set up," Maysick said. "But if someday I needed to make 2,000 doughnuts per day, I would love to navigate that problem." 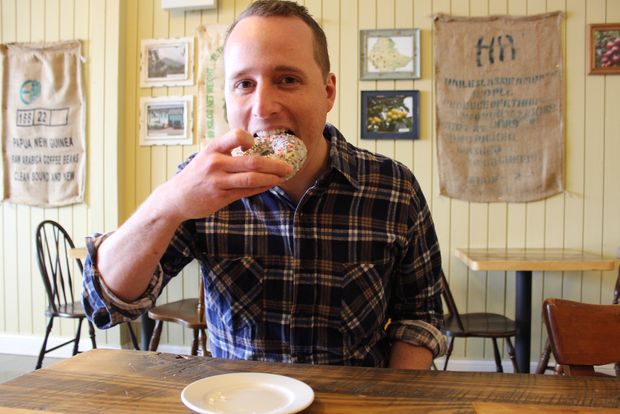 Dylan Maysick of Pilsen is the owner of Front Room Donuts. His company is based out of Bridgeport Coffee Co.'s Beverly location. [DNAinfo/Howard A. Ludwig]

Maysick's growing doughnut business prompted him to take a step back from his role at Bridgeport Coffee. He's now merely a barista, having handed off his managerial duties.

That said, his love affair with doughnuts dates back to 2011, when he explored a career in the food industry. Maysick landed a job at a cafe specializing in vegan comfort food in Brooklyn, N.Y.

His job was to make vegan doughnuts for the brunch crowd. He did that twice a week for more than a year, eventually being able to complete a batch of these unique doughnuts by relying more on his instinct than the recipe, he says.

But Maysick also wanted to try teaching as a career. So he entered a fellowship program and taught children in New York for three years, beginning in 2012.

But even as a teacher, Maysick dreamed of doughnuts.

"On my days off, I started making doughnuts and selling them at farmer's markets in Brooklyn," Maysick said. "It was an experiment, and it went well."

He soon moved back to Chicago to reunite with a college girlfriend. The couple will be married in July.

Meanwhile, Maysick did some investigating and learned many bakeries rely on coffee sales to drive the bottom line. So he set out to learn the coffee business. And that's how he landed a job with Bridgeport Coffee, which led to his current shared-space situation.

As for the doughnuts themselves, Able and Andrea Banda of south suburban Burbank said they try to buy the homemade doughnuts every week at Bridgeport Coffee in Beverly.

Often the doughnuts are sold out by the time they arrive, but the couple was able to buy two warm, fresh doughnuts late Friday morning.

"It takes me back to my youth," Able Banda said.