State Rep. Monique Davis Retires After A 29-Year Career As A Lawmaker

Davis, 80, filed the necessary paperwork with the clerk's office of the Illinois House of Representatives Dec. 23. The document was officially received Tuesday and says Davis' resignation was effective as of Friday.

A Morgan Park resident and a mother of two, Davis worked as a Chicago Public Schools teacher for 18 years and later as a CPS administrator before entering a career in politics. She received her undergraduate and graduate degrees from Chicago State University.

Attempts to reach Davis on Friday were unsuccessful.

State Sen. Bill Cunningham (D-18th) said Friday that Davis' replacement will be determined based on a weighted vote among the Democratic committeemen serving in her area. Ald. Matt O'Shea (19th) and Ald. Carrie Austin (34th) will be among those with a vote.

Davis ran unopposed in the general election on Nov. 8. Members of the Illinois house serve two-year terms, and a successor has not been named. 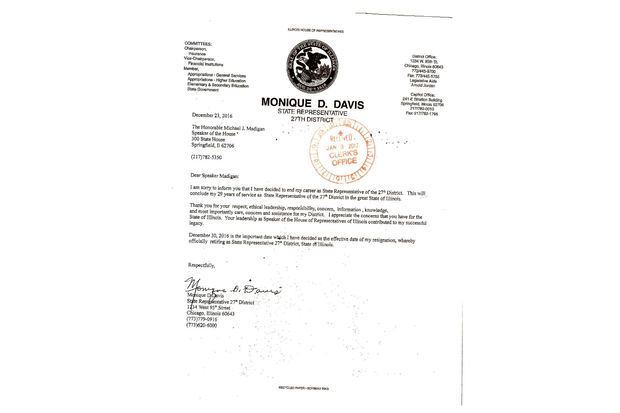