If Trump Wants To Stop Violence, He Should Push For Tough Gun Laws: Rahm

CHICAGO — Mayor Rahm Emanuel "must ask" for federal help to fight violence in Chicago after at least 762 people were murdered in the city last year, according to President-Elect Donald Trump.

Trump posted his thoughts on Chicago violence, a topic he regularly invoked while running for president, on Twitter Monday. 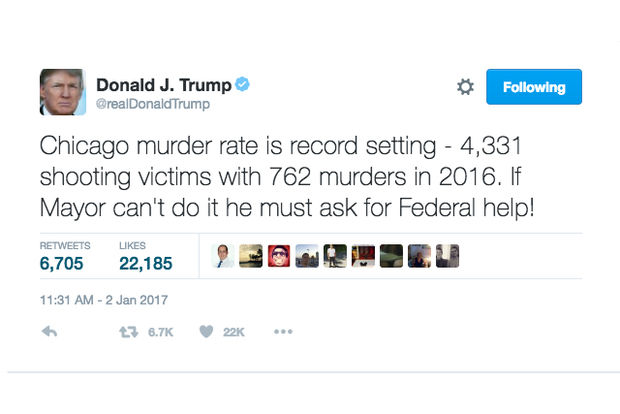 "Chicago murder rate is record setting - 4,331 shooting victims with 762 murders in 2016. If Mayor can't do it he must ask for Federal help!" Trump wrote in the tweet.

A spokesman for Mayor Rahm Emanuel said there is a role Trump's administration can play when it comes to stopping violence: funding programs like summer jobs and creating tougher gun laws.

"As the president-elect knows from his conversation with the mayor, we agree the federal government has a strong role to play in public safety by funding summer jobs and prevention programming for at-risk youth, by holding the criminals who break our gun laws accountable for their crimes, by passing meaningful gun laws, and by building on the partnerships our police have with federal law enforcement," said Adam Collins, a spokesman for Mayor Emanuel. "We are heartened he is taking this issue seriously and look forward to working with the new administration on these important efforts."

In December, the mayor met with Trump at Trump Tower in New York. The mayor said the meeting was about asking Trump to drop his plans to deport young undocumented immigrants.

The Chicago Police Department released its 2016 crime statistics Sunday, along with plans to combat violence in 2017.

Trump has advocated for bringing back stop-and-frisk policing policies to Chicago.

"Now people can criticize me for that, or people can say whatever they want, but they ask me about Chicago, and I think stop-and-frisk with good strong law-and-order," Trump said in September.

A month earlier, then Republican candidate Donald Trump told Fox News' Bill O'Reilly that police could end the city's violence "in one week" if the city wanted to.