MOUNT GREENWOOD — Doctor McDog visited what will soon be his office at 3301 W. 111th St. in Mount Greenwood for the first time Tuesday.

Commonly known as "Doc," the Dutch Shepherd will eventually be used during therapy sessions at Begin Within Therapy Services Inc., owner and therapist Kathleen McShane said. She launched a fundraiser July 22 to bring a therapy dog to her practice on the Far Southwest Side.

"He's doing basic obedience training now because he is just a puppy," McShane said as the big-eyed pup sat beside her feet.

The online fundraiser had collected $7,607 from 68 donors as of Tuesday morning. The full price of the dog is $12,500, as Doc requires a year of intense training with Minnesota-based Argos K9 before joining the staff, McShane said. 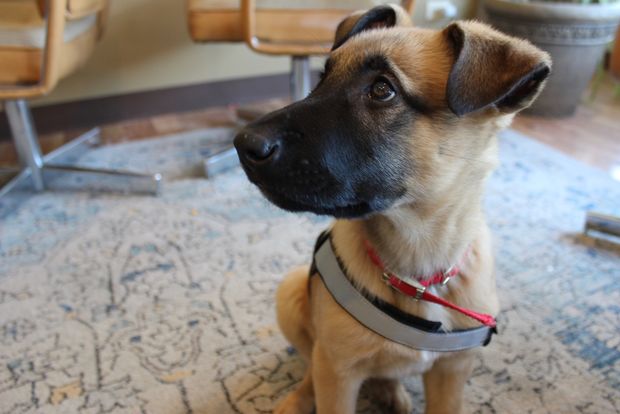 Therapy dogs are trained to detect anxiety, sadness and a range of other emotions, she said in a previous interview. The dogs respond to these emotions with simple gestures such as sitting at the feet of an angry adult to de-escalate a tense situation or lending a sympathetic ear to child as he or she talks through a difficult incident.

Although not fully trained, Doc showed a bit of his potential Tuesday, as one reluctant teen eagerly agreed to a therapy session in order to meet the puppy. Another child spoke about several issues while petting the dog the whole time. 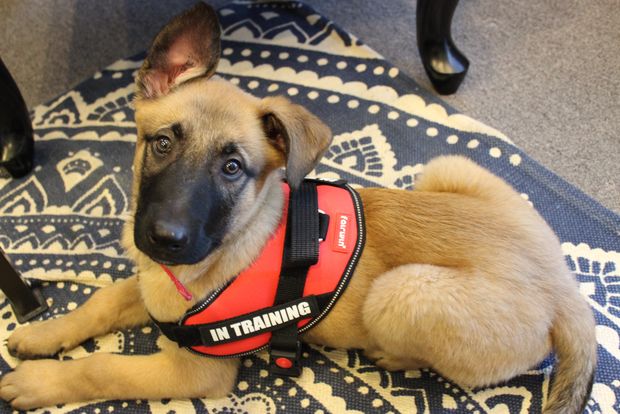 She hopes to raise the rest of the money for Doc's training by March 2018. Several corporate sponsors have already stepped up to the plate, including Beverly Hills Animal Hospital, Beverly Bank and others.

Doc visited the dog-friendly bank at 10258 S. Western Ave. in Beverly on Tuesday and was given a bone by a teller. Eventually McShane plans to make Doc a fixture at community events as well as hospitals, retirement homes, schools and other places where his skills will be put to use.

Doc was born Oct. 14 in St. Johns, Mich. He spent the first eight weeks with a breeder who paid close attention to his temperament before approving his training at Argos K9, McShane said.

After a month in Minnesota, Doc was given the green light to visit Chicago for two weeks. He's splitting his time here between McShane's office in Mount Greenwood and her home in Beverly. Then he'll return for more training, while continuing to visit and for longer stints. 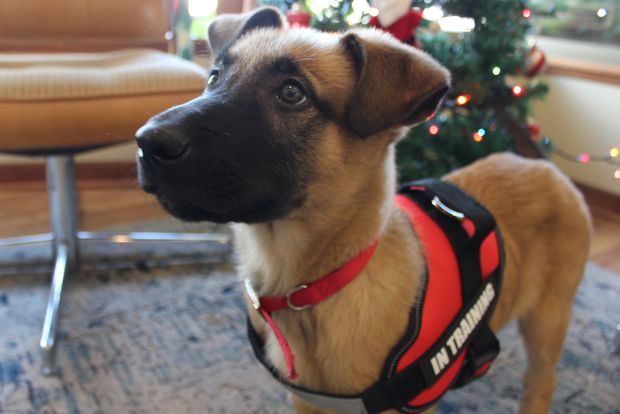 McShane hopes his training will be complete by April 2018. Once he becomes a full-time fixture at the office, all of the therapists will be trained on how to best use Doc's unique talents.

This is not the first non-traditional approach to therapy for McShane's practice, which boasts six therapists as well as a pair of yoga instructors and a massage therapist — both of whom use their skills to treat patients.

And as for the dog's name, Doc was chosen through an online poll where donors were allowed to vote in exchange for their support. Other options included Montana, Gus, Harry and Conry — a Gaelic name meaning, "King of All Hounds."

McShane said Doc's coloring is a bit unusual too, as most Dutch Shepherds have darker features. But as of now, only the dog's tail carries a touch of black fur.

"His tail looks like it has been dipped in an inkwell," she said.