The bags provided by the Maple/Morgan Park Community Food Pantry had everything necessary for a holiday meal, including a chicken, dinner rolls, vegetables and more, said Lillian Hennings, executive director of the food pantry housed in the church at 11030 S. Longwood Drive.

"We are kind of proud of our pantry," Hennings said Tuesday. "There are plenty of hungry people out there." 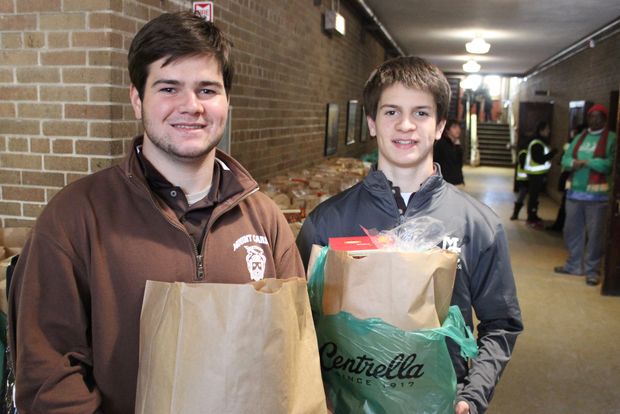 Dominic (left) and Gino Antonietti of Beverly were among a group of volunteers from Mount Carmel High School who helped the Maple/Morgan Park Community Food Pantry with its annual holiday distribution. [DNAinfo/Howard A. Ludwig]

Hennings is among the founders of the foot pantry that dates to 1983. Back then, the pantry served about 30 people each week. This year, the 40 volunteers expect to feed about 12,000 people, she said.

"This food pantry is considered one of the best in the city of Chicago," said Henry Vellinga, a Beverly resident and interim chairman of the pantry.

Adrienne Bard agreed. She walked to the pantry on the cold day from her home near 99th Street and Walden Parkway in Beverly to pick up two bags of food for the holidays. Bard lives in the 60643 zip code. The food pantry is meant to serve individuals living there and in the 60655 zip code.

"Everyone is nice here to me, and they are friendly," Bard said. "They do have things that I need, and they have good food." 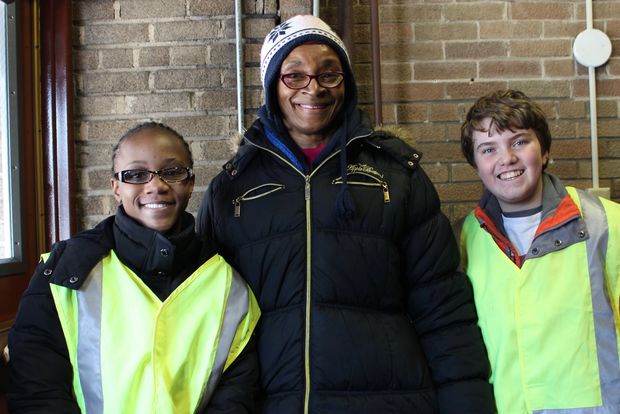 Adrienne Bard of Beverly walked in the cold to the Maple/Morgan Park Community Food Pantry for the annual holiday distribution. A pair of volunteers helped her load two bags of food in her wheeled cart. [DNAinfo/Howard A. Ludwig]

The holiday food distribution is second only to Thanksgiving in terms of volume, Hennings said. Last month, the 40 volunteers at the food pantry prepared nearly 800 bags for those in search of such a meal.

The Thanksgiving meals include a turkey, which makes it particularly popular, Hennings said. Easter is also a popular time for distributions. That said, the pantry is open every week from 1-2:30 p.m. on Tuesdays and Fridays. 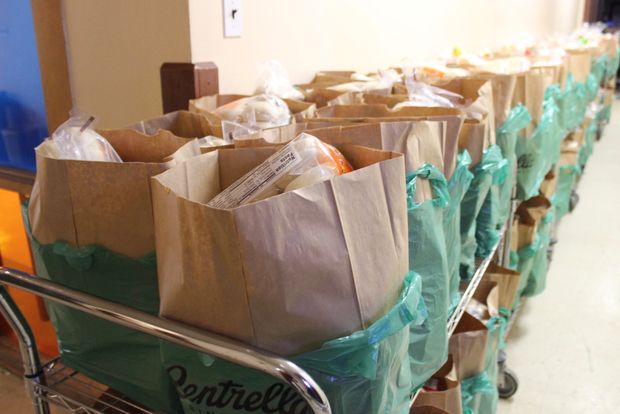 The holiday distribution was a bit slow this year, as several volunteers theorized some clients might have stayed home because of the cold weather. But donations were up in 2016, according to Karen Overstreet, assistant director of the pantry.

She said about 450 people donated to the pantry's annual appeal, up from roughly 400 people last year. The pantry has a list of 1,000 potential donors and asks each of them to give at least $15, which buys a meal for one family.

"The schools, churches, everybody is behind it. They have kind of owned it," Vellinga said.

Phyllis Elliot of Morgan Park said she's visited the food pantry before but doesn't consider herself a regular. She's hoping her grandchildren will visit over the holidays and was thankful for the neighborhood food pantry. 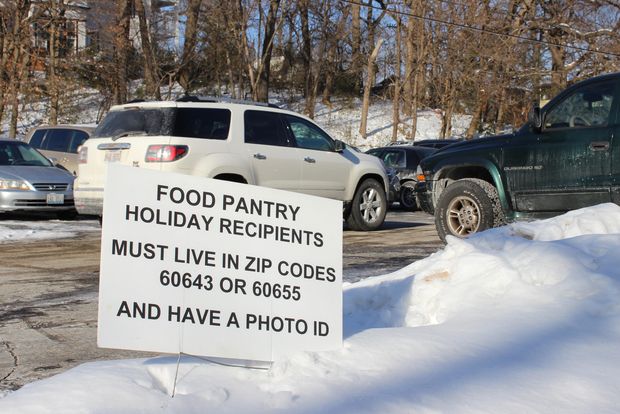 "I think it's a nice idea to help the community out," said Elliot, who was one of many seniors to visit the food pantry.

Dominic and Gino Antonietti of Beverly helped carry bags of food out to cars. The brothers were among a group of Mount Carmel High School students and others who volunteered for the holiday distribution.

"The look on people's faces to see that they are going to have food this Christmas — they are truly grateful," Dominic Antonietti said.

Emma Burdine of Washington Heights hopes to visit her son in Moline this holiday if she can share a ride with another family member. She appreciated the food as well as speaking with the volunteers.

"You get to talk to people and see people and that makes it all worthwhile," she said.