Hamilton Principal Stepping Down After Fighting To Save His School

By Ariel Cheung |&nbspDecember 21, 2016 9:47am | Updated on December 22, 2016 8:55am
@arielfab
Twitter Facebook Email More
Hamilton elementary Principal James Gray is leaving at the end of this school year, after eight years at the helm.
View Full Caption
DNAinfo/Ariel Cheung

LAKEVIEW — Without James Gray, Hamilton wouldn't be half the school it is today — quite literally.

In 2009, the Lakeview neighborhood school was set to be phased out as Chicago Public Schools moved to close, consolidate and "turn around" two dozen schools.

Local School Council Chair Stacey Paradis and Gray, who was about to begin his first year there, credit "a passionate group of Hamilton parents" with persuading CPS to give Hamilton another chance.

Since then, the student population has doubled, and the school itself has been remade. As such, Gray is stepping down after eight years at the helm of Hamilton, 1650 W. Cornelia Ave.

"I think James is someone who really likes to build things," Paradis said. "He's more comfortable in that activist role, to really make a difference. I think that's what really excites him."

Gray told the school community last week that he will not seek a third contract, but hopes to remain in CPS, perhaps as a coach for new principals.

"We've really built a thriving school, and I'm really proud of that, but I think it's time for me to seek a new challenge," Gray said. "But also, I think a new leader can do great things here."

Gray has a replacement in mind — his longtime co-principal Yolanda Luna-Mroz.

"Our success as a school is greatly due to her," he said. "She's the leader Hamilton needs."

The decision rests with Hamilton's LSC, which Paradis expects to have chosen a new principal by the time Gray leaves June 30.

Made newly popular by the smashingly acclaimed musical "Hamilton," the school's namesake is featured throughout its hallways. In the principal's office, a portrait of Alexander Hamilton is adorned with a quote from the musical: "Look at where we are, look at where we started."

It's a particularly fitting mantra for Gray, who has overseen the school's transformation into a creative arts magnet school complete with a garden, dance program and a "no homework" policy that prestigious schools like Lane Tech are starting to test out.

"Eight years ago, people wouldn't even walk in the door here," Gray said.

With just 209 students in 2009, the school was hardly the preferred choice for Lakeview families, Gray said. So he envisioned a school that would attract them, and then piece by piece, they built it.

"I'd lead the tour with six people and tell them, 'This room is going to become a science lab; this is going to become a dance studio,'" Gray said. "It wasn't — it was just an empty room. But it's what I believed in, and I think I sold that to parents, and they just kind of came on board." 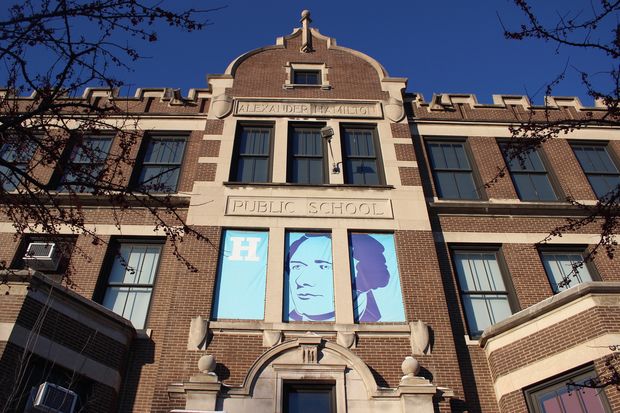 Hamilton elementary is a magnet cluster school with a focus on the arts. Set to be phased out in 2009, the school has doubled its attendance over the last seven years. [DNAinfo/Ariel Cheung]

His LSC chair helped promote the school, and together they developed a marketing strategy. In a year, Hamilton doubled the number of students applying to kindergarten, according to a 2010 WBEZ report.

Gray accepted every one of the 225 applicants. Seventy enrolled.

By the time his first contract was up, "suddenly, Hamilton was a [viable] choice if you lived in the neighborhood," Gray said. "Parents were moving into our district to come here."

In 2013, Hamilton was not threatened with closure when CPS shuttered 49 schools, in the largest number of school closings in one year in the United States.

This year, more than 500 students applied to kindergarten, he said.

There have been so many changes at Hamilton, Gray and Luna-Mroz have trouble recalling all of them. They painted walls, swapped out the blinds to bring in more sunlight and got rid of individual desks so students could work together at communal tables.

There's a new turf field and a basketball court. Early on, Gray pushed for a garden on the school grounds.

"It's powerful when students who've been here leave and come back and say, 'Mr. Gray, why couldn't you have done that when I was here?'" he said.

Now, Hamilton matches any selective enrollment school in the city when it comes to a well-rounded education, Paradis said.

"All of our kids have recess and gym or dance every day, and you don't see that in all the schools," she said. "The teachers, the LSC wholeheartedly supported that, and I think a leader helps bring all that together."

There are bad days, of course, with midyear budgeting woes in February contributing to Gray's decision to leave.

Hamilton had the third-largest percent of budget cuts, with the $72,627 loss, costing the school a teacher. Other schools fared better thanks to "rainy day" funds — a philosophy Gray doesn't subscribe to.

"Because so many principals 'saved' money for a rainy day, the narrative will be, 'See! They didn't have to cut so many teachers. Look at the waste,'" Gray posted on Twitter at the time. "When it should be, 'Man, those poor kids didn't get more arts, PE, books, technology all year."

And after Gov. Bruce Rauner vetoed $215 million for CPS this month, another massive budget cut looms.

"I think the district took the right steps in raising property taxes in a big way," Gray said. "We're doing our part, so the state has to get their act together, or it's going to be the same situation."

The cuts, Gray said, are driving families away from CPS — and the state, which lost more residents this year than any other state, according to U.S Census data.

"We lost 40 kids last year, which is our highest ever," Gray said. "And they're not going to other CPS schools. They're going to Oak Park, Memphis, Minnesota, in part because of the uncertainty Chicago schools are facing."

RELATED: What Do Students Think About The CPS Budget? 'We're Screwed' (VIDEO)

While the constant budget concerns are wearying, Gray said he's confident Hamilton will weather them.

Before he leaves, Gray said he hopes to further his push to de-emphasize selective-enrollment high schools and lessen the pressure students face in the application process.

"Kids are becoming more and more stressed out, and we need to let kids know that it's going to be OK no matter where you go," Gray said. "Your value as a person is not tied to what high school you go to."

Just a few blocks north, Lake View High School faces many of the same challenges in attracting students that Hamilton did eight years ago, Gray said.

"People just had a preconceived notion, a wrong notion, of what this school is," Gray said. "So we created an environment where kids want to be."