THE LOOP — The Hotel Burnham, a Loop lodge named after one of Chicago's most legendary architects, is now going by something else.

The hotel at 1 W. Washington St. has been renamed The Alise Chicago after being sold, according to Bellevue, Wash.-based Pineapple Hospitality Co., its new owner. The deal closed last week and new awning signs are being designed, a Pineapple spokeswoman said.

The sale opens another chapter in the somewhat turbulent history of the Reliance Building, which Daniel Burnham's firm started building in the 1890s as stubborn office workers refused to leave the building it was hired to replace. The 14-story terracotta building with plate glass windows, finished in 1895, houses the hotel and is regarded by city officials as a prototype of the modern steel-and-glass skyscraper.

The Reliance Building once counted merchants and doctors including Al Capone's dentist as tenants, but the tower fell into disrepair for decades after the Great Depression.

City Hall landmarked, then later bought, the tower, and in 1998 a developer acquired the renovated building and opened the 122-room Hotel Burnham there.

The name of Burnham, the Chicago architect who famously said to "make no little plans, they have no magic to stir men's blood," will be replaced by Alise, a variant of Alice or Alisa that Pineapple executives said is evocative of a timeless "Hollywood heroine."

"Perfectly proper, but just a little bit naughty, in all the right ways," Trisha Clayton, a Pineapple spokeswoman, said in an email. "In Alise’s presence, you imagine yourself shedding inhibitions to try something new."

Alise is also a brand name from Pineapple, which recently opened a boutique Alise hotel in San Francisco. The hotels tout amenities including free bike rentals and "dog-friendly accommodations," as well as special bedding and bathrobes that are coming to Chicago next year.

Clayton said Pineapple re-hired all Hotel Burnham employees, and Atwood, the hotel's restaurant, will remain. The Alise's meeting room will be named "The Burnham Room" to pay homage to the building's past.

Pineapple also plans "to engage with historical/architecture tours, keeping [the building] in the limelight as a gem in the city," Clayton said in an e-mail.

Pineapple acquired the hotel from Kimpton Hotels, which renovated the Hotel Burnham last year. Clayton and a Kimpton spokesman declined to disclose the terms of the deal. 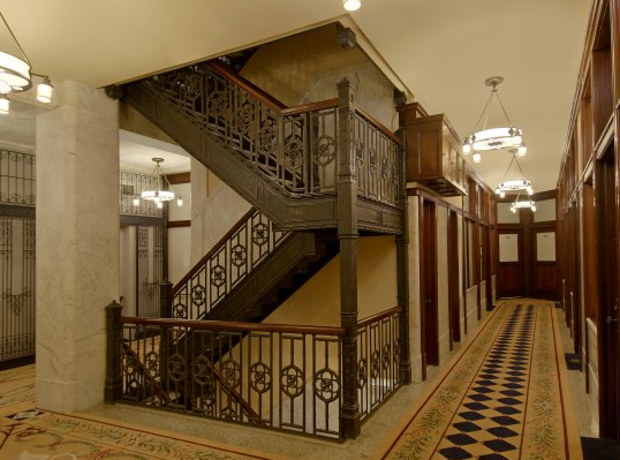 Many of Burnham's original fixtures remain inside the hotel. [Facebook/Hotel Burnham]

Burnham, who died in 1912, designed some of Chicago's best-known buildings including the Rookery Building on LaSalle Street and the Macy's (née Marshall Field's) store on State Street. He helped lead the design efforts for the famed 1893 World's Columbian Exposition in Jackson Park and co-authored the 1909 Plan of Chicago, whose aspects still guide city planners.

Burnham's firm was hired to design the Reliance Building at State and Washington streets, but when office workers refused to leave an existing building on the site, Burnham's contractor "jacked up the second, third and fourth floors of the existing building and demolished the raised basement and first floor," according to the Chicago Architecture Foundation.

"Construction began on the new building's foundation while its tenants remained above," the foundation said.