DOWNTOWN — The big star Chi-Town Rising will use to ring in 2017 is taller than some of Chicago's best-known monuments.

It's bigger than three Trump Tower signs stacked on top of each other. Or two Beans. Or the entire Illinois Centennial (eagle) Monument in Logan Square.

At more than 70 feet, the focal point of Chicago's outdoor New Year's Eve party stands taller than many of the city's most familiar sights. And that's before it will rise 360 feet up to a perch on the Hyatt Regency hotel on Wacker Drive as Chicagoans celebrate the new year.

“Our city’s spirit inspired our choice to have an icon rise — not fall — on New Year’s Eve,” said John Murray of Arena Partners, the event's organizer. “We believe that the Rising Star is quintessentially Chicago, and for us, it’s the heart of the entire Chi-Town Rising celebration.” 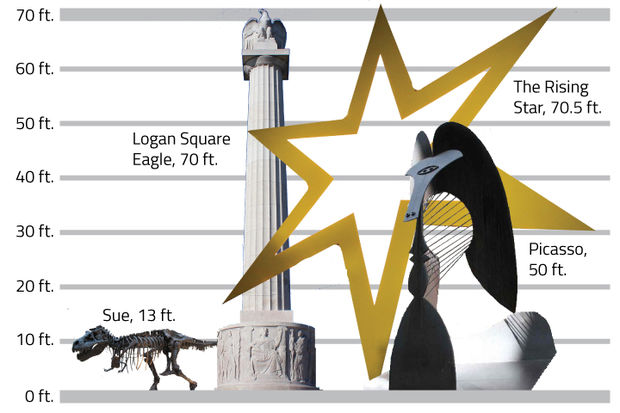 Chi-Town Rising's star is taller than many of Chicago's most familiar sights. [DNAinfo/Tanveer Ali and Lizzie Schiffman Tufano]

Tip to tip, the 12,000-pound-star stretches 70 feet and 6 inches, or more than three times taller than Donald Trump's 20-foot-tall sign on the side of Trump Tower on the Chicago River.

The "Rising Star," as it's called, is also twice as tall as Millennium Park's 33-foot Bean.

Made in Chicago, the star is composed of more than 2,600 feet of tube and will take 34,000 pounds of steel to scale up the riverfront Hyatt on New Year's Eve, officials say. Four winch motors weighing nearly 1,000 pounds each will do the heavy lifting as 17 tons of steel support the star on its way up.

The star can light up and play videos, but it was designed with more than aesthetics in mind. The six-pointed star is akin to those on Chicago's flag, and Murray said his star was inspired by the flag's second star remembering the Chicago Fire of 1871 as well as the city's "phoenix-like rise" in its aftermath.

Chi-Town Rising drew a reported 90,000 attendees in its debut last year. NBC and Telemundo at 11 p.m. will begin televising the event, which will feature Sir the Baptist and Saint Motel as headliners.

Chi-Town Rising requires a free ticket to get in.

Chi-Town Rising Is Back For New Year's 2017. What To Know If You Go

From Sleeping In His Lyft Car To Lolla: Sir The Baptist, Hip-Hop Disciple

The Bean or Cloud Gate? We Found Something All Chicagoans Agree On

The View From The Top of the Logan Square Eagle Monument