By Howard Ludwig |&nbspDecember 20, 2016 6:22am
@howardaludwig
Twitter Facebook Email More
Christ the King School in North Beverly will receive a new "Buddy Bench" from the The Joseph Middlemiss Big Heart Foundation. A 6-year-old girl from New Hampshire read the story of Mary Cate Lynch and asked for donations to the charity. That led to a bench being sent to Lynch's school.
View Full Caption
DNAinfo/Howard A. Ludwig

BEVERLY — Mary Cate Lynch inspired a 6-year-old girl from 1,000 miles away to raise money for a new "buddy bench" at Christ the King School in Beverly.

Melanie Caples of Hudson, N.H. turned six Nov. 29 — also known as Giving Tuesday — and decided to give back herself by using her birthday as an opportunity to raise money for charity.

Melanie's mom, Erin Caples, previously ran a 5K race for The Joseph Middlemiss Big Heart Foundation. The Massachusetts-based charity is named for Joseph Scott Middlemiss, who died September 23, 2013. He was just 6 years old and suffered from a disease of his heart muscle called cardiomyopathy.

The charity was incorporated in 2014. Its mission includes promoting kindness among children, and organizers have bought several buddy benches, mostly for schools on the East Coast, said Scott Middlemiss, who launched the foundation for his late son.

The benches are commonly placed on school playgrounds and in lunchrooms. If children are feeling lonely or left out, they merely sit on the bench, which serves as a sign for other children to include them, said Ann Marie Riordan, principal of Christ the King.

The school at 9240 S. Hoyne Ave. has two such benches on its main playground already. The third bench is expected to arrive in late January, and Riordan said she's still working on where it might be best used.

"We are honored to be connected with Mary Cate and her family," Middlemiss said. 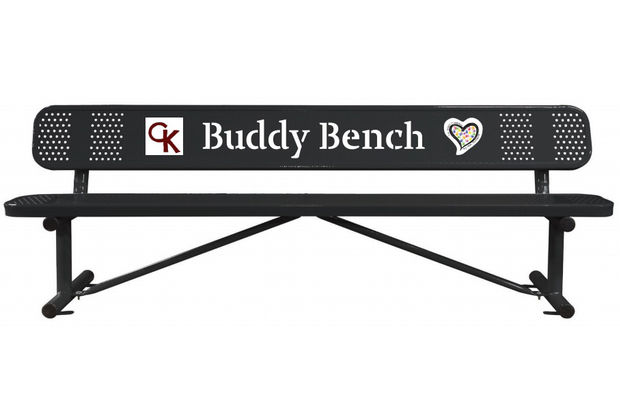 Melanie Caples of Hudson, N.H. turned 6 on Nov. 29 — also known as "Giving Tuesday." — and she used her birthday to raise money for a new "Buddy Bench" to be sent to Mary Cate Lynch's school in North Beverly. [DNAinfo/Supplied Illustration]

Melanie Caples has a buddy bench at her school and has seen its impact first hand. So she made it her birthday mission to buy a bench for another school. She raised more than $1,000 for her effort.

While researching where to best make her donation, Melanie Craples was introduced to the story of Mary Cate, a 5-year-old girl with Apert syndrome. This rare disorder results in extra bones and cartilage, causing a misshapen skull and melded fingers and toes.

Rather than shrink from the diagnosis, Mary Cate and her mother, Kerry Ryan Lynch, reached out to junior high students to talk about what it means to look different and the importance of inclusion.

Their message — known as "Choose Kind" — is often paired with the preteen novel "Wonder." In this book, author R.J. Palacio shares the story of August Pullman, a boy born with a facial deformity.

Students are asked to read the book ahead of meeting Mary Cate, which drives home the underlying message. The Lynches have visited more than 100 schools since May 2012.

Mary Cate "is only in her second year here at preschool. It's amazing what she has done here and out in the world," Riordan said Friday.

Melanie Craples was touched by Mary Cate's story, particularly after reading "Wonder" herself and watching a video of Mary Cate opening an early birthday gift from the Barbie design team, Erin Caples said.

Riordan expects her students at Christ the King to "pay it forward" after receiving the new bench — perhaps hosting a fundraiser of their own to pay for a buddy bench at another school.

And after reading the mission of The Joseph Middlemiss Big Heart Foundation, Riordan believes such an effort would be the best way to keep the young boy's memory alive.

"They wanted his big heart to live on," she said.