CHICAGO — County assessors account for dozens of variables when figuring out how much properties are worth, from the kinds of shingles on a building's roof to its proximity to a school playground.

This year, for the first time, they've added one more factor: sensitivity to the roar of airplanes swooping into O'Hare Airport.

In what Cook County Assessor Joseph Berrios called "definitely the biggest evaluation ever done" on the impact of jet noise on property values near the airport, a small team of researchers and city workers spent more than two years poring over aviation data and real estate trends to come up with updated baselines for how much homeowners ought to be paying in taxes.

The result is that nearly 15,000 properties across broad swathes of the Norwood Park and O'Hare neighborhoods had their assessed values marked down by 5 percent, likely saving them a few hundred dollars in taxes in 2017. 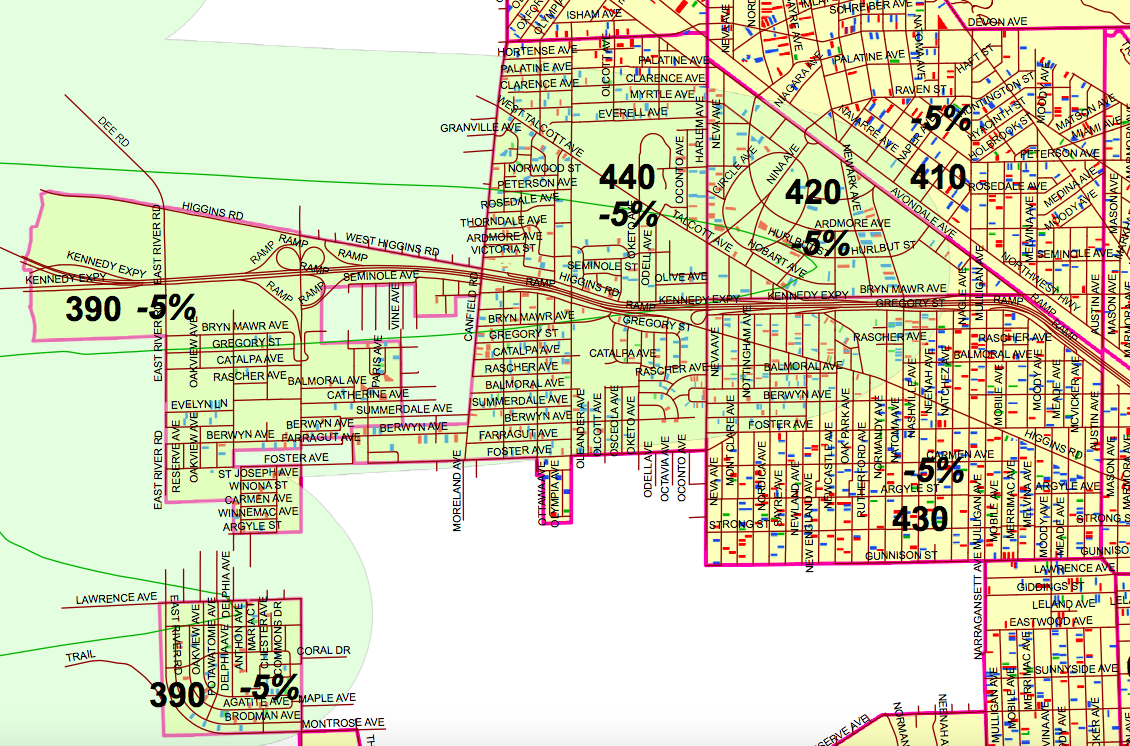 A surging movement of anti-noise activists is celebrating the reductions as the first official concession that planes approaching O'Hare's newest runway, completed in 2013, are tormenting Northwest Siders and suburbanites.

But others are still scratching their heads over who got the reductions and who missed out, not to mention whether any other forms of compensation are in the cards.

Who got their property values marked down?

Since September, 14,795 homeowners inside the city — and thousands more in the Northwest suburbs — were mailed notices saying that their property values had been "adversely affected by the noise caused by newly constructed and reconfigured flight paths at O'Hare."

The assessor's office typically takes a new look at the worth of each property in the county every three years, with the last report published in 2015. But in the face of intense public prodding over jet noise, officials launched a separate study, assessor's office spokesman Tom Shaer said.

"Berrios could have just sat this out and said 'Airport noise isn't my problem,'" Shaer said. "But the changing of the runway situation certainly called attention to it, and he didn't get elected to sit and do nothing."

Aided by a handful of volunteer researchers, assessors gathered a tall stack of studies, some dating to the 1980s, on the demonstrated effects of airplane noise on property values around the country. They lined them up against environmental impact reports, complaints lodged with the O'Hare Noise Compatibility Commission, and the Federal Aviation Administration's "contour line" marking landing paths.

They ultimately marked off nearly every neighborhood west of Austin Avenue and north of suburban Harwood Heights, with the exception of Edison Park.

A value reduction notice was later mailed to every single-family home, and every apartment complex with six or fewer units, in this area. Condos and larger apartment buildings were skipped over because they remained high in demand according to sales data, which was the other tool in their evaluation.

The homeowners who got reductions can't be the only ones bothered by jet noise. Why weren't others included?

Figuring out which properties lie under noisy flight paths is only half the value assessment process, Shaer said. Next, the researchers had to pick through three years' worth of real estate sales, from 2014 to 2016, to figure out where the noise had a demonstrably negative effect on home sales.

"We take the body of work that's been done on airplane noise, and that gives us a variety of ways of looking at the problem and where it exists," said Thomas Jaconetty, the county's deputy assessor for valuation and appeals, who spearheaded the study. "But then you go to the market and plot all the sales, and you see which of those areas are actually impacted."

That's why some neighborhoods, like Edison Park and Edgebrook, got no reduction on their assessed property values despite the planes whooshing over their roofs. Trends show that houses in both neighborhoods remain attractive to prospective buyers, Shaer said.

Edison Park, in fact, saw its median home sale price jump by 20 percent from 2015 to 2016, according to the neighborhood market report published by @Properties last month.

But the selective letters sparked widespread confusion, leading Ald. Anthony Napolitano (41st) to send a note to his constituents Tuesday clarifying that not all homes racked with jet noise were due for reductions. Napolitano's ward includes O'Hare and the neighborhoods closest to it.

"People were calling saying they had a cousin in Park Ridge who had gotten a letter, and they were wondering when they were going to get theirs," said Chris Vittorio, Napolitano's chief of staff. "We had to make clear that people aren't just getting a discount because of noise. Especially in places like Edison Park, where we've got a [real estate] boom going on."

How did residents near O'Hare get the assessor to revisit property values in the first place?

The property devaluation was a foundational mission for the Fair Allocation in Runways Coalition, which launched in early 2013 in anticipation of the new runway being added.

"We wanted to be able to show that when you have planes flying directly overhead, that imposes a cost on citizens and their communities," said Jac Charlier, one of the group's founders. "And how do we measure that cost? One way is through home values."

In September, when assessors indicated they'd mark down property values, the coalition's leaders released an announcement saying they'd been "vindicated."

"This isn't just about saving some money, because at the end of the day, it's not even that much," said Charlier, who led the group through 2015. "The crux of this is that our government has acknowledged that this is a real issue, and they can't ignore it anymore."

Going forward, what other options are there for homeowners fed up with noise?

While many considered the reassessments a moral victory for the coalition, the group's current founder, John Kane, took a more skeptical view.

"A lot of residents are unhappy with [the property devaluation], because it's like they're trying to buy us off without offering an actual solution," Kane said. Jet noise "is a public health catastrophe. People are still moving out of the Northwest Side because of it, and I don't know what we can do about that."'

Chicagoans have lodged more than a million complaints over jet noise so far in 2016, far outpacing previous years.

In September, hundreds of homes near the airport scored a $20 million grant from the FAA for sound-proofing. But the program's scope is limited, Kane said, and will be done at the discretion of federal regulators.

Activists will now focus on extending the provisional O'Hare Fly Quiet Program, which aims to relieve noise by rotating planes through different runways during nighttime hours, Kane said. The program's trial run is set to end this month.

Meanwhile, Napolitano will continue to push for other kinds of compensation, like automatic tax rebates for homeowners who live near the airport, Vittorio said.

"You have families who have lived in this ward for generations, and they're now starting to see their property values go down," Vittorio said. "A lot of these residents have no intention of leaving — they just feel that they're lacking in services. They need something."