WRIGLEYVILLE — Those who recall the days when 40,000 people flooded Wrigleyville for the Twelve Bars of Christmas, also known as TBOX, might be surprised to see a more subdued event this weekend.

In recent years, the bar crawl has capped attendance at half its 2012 peak, and organizers expect Saturday's event to be on par with last year's 14,000 participants.

Police have boosted their presence, and the crawl has promised to provide 100 security guards for added safety.

Still, there are a few things that organizers, city officials, bar staffers and neighbors want attendees to know:

Bar crawls are, by design, meant to get people to patronize many bars for several hours. That can be an issue when it comes to drinking too much.

"Everyone gets too drunk," said a longtime Redmonds bartender known as Patty Mac. "But at a Chicago bar crawl, the rules usually don't apply."

Unruly participants will be booted from the bar crawl, according to Ald. Tom Tunney (44th).

"It's a complex question, but a good question," she said.

The crawl organizers have extensive discussions with bar owners on the issue, "but we respect how the bars run their business," she said. The crawl does provide free tokens for drinks or food with every ticket package, but can't tell bars what to do when it comes to their customers.

"TBOX doesn't serve alcohol, so that's an area really reserved for the bars and establishments," she said. "We encourage a safe event."

As a rule of thumb, most people metabolize one drink per hour, although age, gender and size play a part. Eating and drinking water during the crawl is highly, highly encouraged.

After all, nobody likes caring for the hot mess, bar employees said.

"Getting so drunk that you fall down a flight of stairs and the bar has to call the ambulance for you is not cute," said one server. 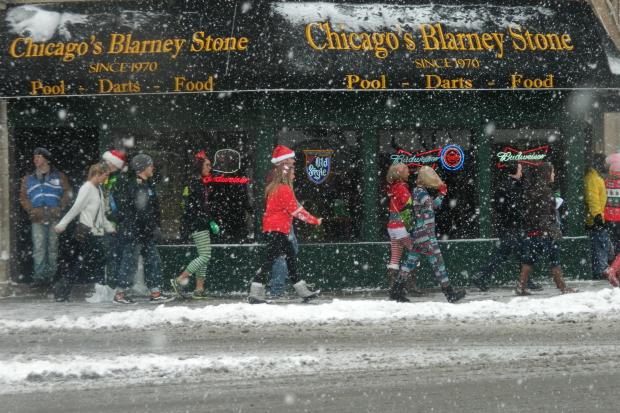 Partiers walk past Chicago's Blarney Stone at Clark and Sheffield during TBOX in 2013. [DNAinfo/Josh McGhee]

Chicago could get 12 inches or more of snow during three separate storms over the next week.

On Saturday, a storm is expected to hit the city during the afternoon and last through the night, leaving behind 2-5 inches of snow, according to the National Weather Service. The North Side should be harder hit than other parts of the city.

Plus, there's the Midwestern grit factor.

"We're all Chicagoans, and rain, sleet or snow, people do what they want to do," she said.

Still, with snow expected and the possibility of standing in lines outside the bar, it makes a lot of sense to dress as warmly as possible.

3. Take advantage of the zones

Participants are split into three teams — blue, green and red — that will rotate through the bars in shifts to better distribute participants among the 40-some bars at a more consistent pace.

"Take advantage of the zones," when they adhere to their team's zone, Druss Christman said. "That's a really good way to make sure you see a lot of TBOX."

4. Don't pee where you're not supposed to pee

It sounds simple, but it's something that many bar staff and neighbors have complained about.

"Throwing cereal around and urinating in trash cans is not cool, even if you're wearing a Santa suit," Patty Mac said. "Somebody has to clean that up, you nerds."

Neighbors say they deal with people urinating on their yards and alleys — part of why TBOX will place 60 portable toilets along the crawl and have extra security in place to discourage crawlers from wandering into the neighborhood. 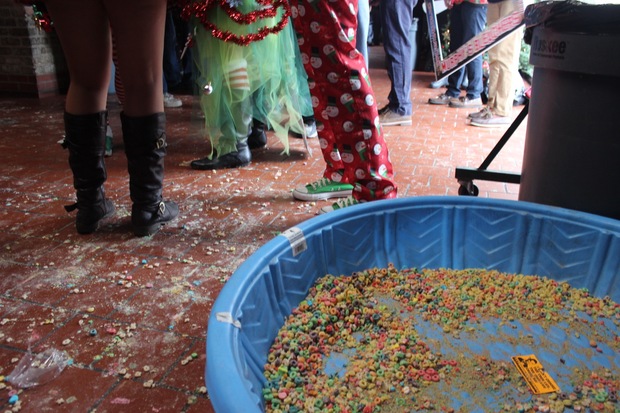 As servers and bartenders schlep through grueling shifts and massive crowds, getting repeatedly pestered for their phone numbers or groped is not okay.

"Buying drinks or being drunk is not an invitation or excuse to touch on or grab your server," one waitress said.

The boorish behavior is not limited to TBOX, of course.

"It's not a normal shift for me if I don't get repeatedly asked for my number or I get offered a big tip to go flirt with somebody at the table," said a 28-year-old teacher who also works in Wrigleyville as a server. "I try to brush it off, but I'm really uncomfortable when it's happening."

She said she finds it difficult to let customers down gently because "they're going to think I'm a b---- or that I'm leading them on for a big tip." She wears her engagement ring but it does little to dissuade some men. 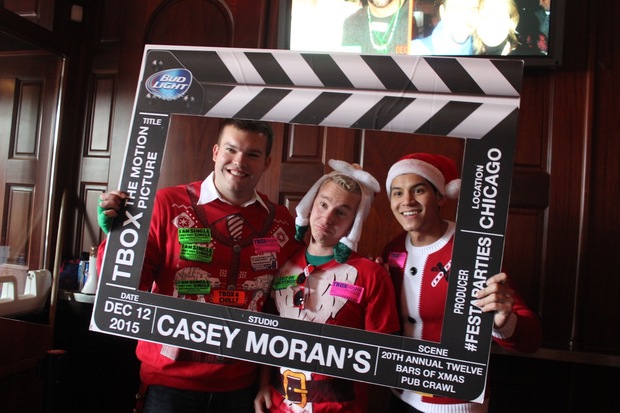 It's "not uncommon" for waitresses to deal with "really handsy" customers, she said, but her bar's security personnel are quick to eject people who assault servers or are overserved.

"Keep in mind, door guys love tossing gropers — they're the lowest life form," Patty Mac said. "Any touching or groping is grounds for immediate ejection from the bar."

6. Treat your servers with respect and tip them very, very well

One Asian American woman said that in addition to getting hit on, she has to grapple with patrons making comments about her race.

Customers will ask "where I'm 'really' from, patting me on the head and saying, 'Oh my God, you're such a cute Asian,'" said the server, who is also a graduate student. "Which has happened to me more than once."

As the day wears on and more drinks are consumed, customers get lax on tipping or forego it all together, she said.

"If I didn't need the money, I definitely wouldn't do it," she added of working big events like TBOX.

Depending on how long customer stick to one bar, tips can vary on big nights, said the teacher who works in Wrigleyville.

If tables get filled and people linger — as they did during the Cubs postseason games — the lack of turnover means fewer tips, she said. And servers at her Clark Street bar split tips with food runners, bussers and bartenders, leaving the server with half the tip.

"So if a bill is $100 and they leave us with $10, we won't see any of that, which can be really frustrating," she said. If a customer stiffs them on a tip, the money for the other employees comes out of her own pocket, she added.

At the same time, "I've seen increased percentage of tips, like a $5 tip on a single beer because the Cubs are doing so well," she said. Customers are in high spirits, which can make for "a lot more generosity."

Again, it might seem like obvious advice, but "without fail, someone gets busted every year having sex in the bathroom," Patty Mac said.

Actually, as long as it's consensual, the bathroom sex is sometimes better than the alternative, he said.

"It's the unslick Santa and the disheveled elf trying to get it in in a booth that I take issue with," he said. "We have supply closets, people."