Chi-Town Rising Is Back For New Year's 2017. What To Know If You Go

By David Matthews |&nbspDecember 5, 2016 8:08am | Updated on December 27, 2016 10:44am
@DavidLMatthews
Twitter Facebook Email More
A big star on the Chicago River rang in 2016 during the inaugural Chi-Town Rising.
View Full Caption
Twitter/chitownrising

DOWNTOWN — Chicago's outdoor New Year's party promises to be "bigger and better" the second time around.

Chi-Town Rising is coming back Downtown to ring in 2017 after drawing a reported 90,000 attendees last year. Like last year, the festival will culminate with a big star rising up the Hyatt Regency hotel, 151 E. Wacker Drive, and fireworks over the Chicago River.

But unlike last year — a ticketed event with prices starting at $119 — this year's festival will be free.

“We surveyed attendees from last year, and we have incorporated their feedback to make this year’s Chi-Town Rising celebration bigger and better," John Murray of Arena Partners, the event's organizer, said in a statement.

New additions to this year's party include a 5K run the morning of New Year's Eve through Millennium, Grant, and Maggie Daley parks; as well as a "silent disco" party with headphones on Pioneer Court, 401 N. Michigan Ave.

Here's what to know if you go:

• The festivities begin with a "Rise & Shine" 5K starting at 9 a.m. in Millennium Park. The race will run through Grant and Maggie Daley parks before ending in Millennium Park. Early bird tickets are available for $35 till Dec. 8. Visit the race's website for more information.

• A "Family Countdown Celebration" for kids who can't stay up all night will last from 3-6 p.m. in Millennium Park's Wrigley Square at Michigan Avenue and Randolph Street. The event will include warm drinks, live entertainment and a "halfway to midnight" countdown for little ones.

• The "silent disco" on Pioneer Court will run from 9 p.m.-midnight. Guests will wear headphones and boogie on an interactive dance floor. The disco, sponsored by Corona, will also sell drinks.

• Chi-Town Rising itself has two viewing areas — one on Pioneer Court and another on Upper Wacker Drive — that will guarantee entry till 9 p.m. NBC will begin broadcasting the festivities at 11 p.m. 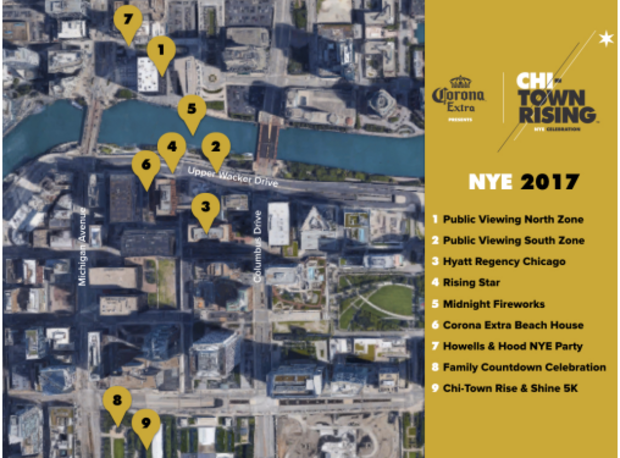 Do I need tickets?

Yes, but they're free. Get them here. All ages are welcome, but curfew laws will be enforced.

Guests will be wanded and subject to bag searches. Here's what you can't bring:

Luggage of any kind

Outside food or drinks

Weapons of any kind

Poles to display banners or flags

Cameras with lenses longer than 3 inches

Indie Pop band Saint Motel and Bronzeville-bred rapper Sir the Baptist will headline this year's party on the Chicago River, according to a press release.

It's cold, I don't want to stand outside on New Year's Eve in Chicago.

Any other associated events?

Navy Pier, the Hard Rock Café, the Sheraton Grand hotel and Howell's & Hood (the bar inside Tribune Tower) are all hosting their own New Year's events.

Can I just watch on TV?

NBC and Telemundo will broadcast Chi-Town Rising beginning at 11 p.m.