By Howard Ludwig |&nbspNovember 25, 2016 5:39am
@howardaludwig
Twitter Facebook Email More
Joshua Mercer is building a new office at 2101 W. 95th St. in Beverly. A native of the area, Mercer is also building a home for his family on the second and third floors.
View Full Caption
DNAinfo/Howard A. Ludwig

BEVERLY — Joshua Mercer is building both his dream home and his business at 2101 W. 95th St. in Beverly — converting a dilapidated building into his private residence atop a new first-floor storefront.

"With all of the work they are doing on 95th Street and Western Avenue, I feel like I got in at the perfect time," said Mercer, who was raised three blocks from his new home and office.

Mercer, 35, opened his Allstate Insurance office in October 2012. His current storefront is immediately to the east of his building that's under construction. Once complete, Mercer will share the block with Barraco's new banquet hall and catering kitchen.

Construction is underway for Barraco's kitchen next to Mercer's building. The Italian restaurant chain also plans to convert the long-vacant library on the same lot to a banquet facility called "The Vineyard."

This development follows the opening of Advance Auto Parts at 1808 W. 95th St. and Safeguard Self Storage at 1909 W. 95th St. earlier this year. Local officials believe such improvements will continue as the redevelopment of Evergreen Plaza wraps up next year.

"We really just want people to know we are committed to the neighborhood," said Mercer, who purchased the building that last housed an antique shop in September 2015. 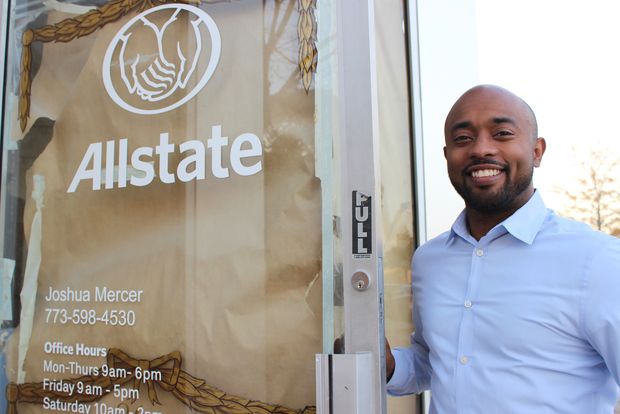 Joshua Mercer's Allstate Insurance Agency will open immediately west of its existing office by the end of the year. Mercer plans to live above the storefront at 2101 W. 95th St. in Beverly. [DNAinfo/Howard A. Ludwig]

Mercer is also excited to send his children to Sutherland Elementary School — his alma matter. He also graduated from Brother Rice High School in Mount Greenwood in 1999.

He said his wife, Kenya, and their two children — Josh, 2½, and 2-month-old Charli — are equally eager for the move. Mercer said he expects the new office to open before the end of the year.

Mercer's mother, Frances Wright, is also an Allstate agent. Her office is at 9013 S. Western Ave. in North Beverly. She's been in the business 30 years and leveraged her agency so Joshua could open his own office.

"She really wanted me to be an Allstate agent — like her," he said.

Besides insurance, Mercer is also the founder of Swish Dreams, a foundation that helps kids learn math and reading through sports and statistics. The charitable group was launched 10 years ago and has grown to include a summer camp as well as weekend and after-school programs.

Mercer launched Swish Dreams after teaching elementary school at ACE Technical Charter High School in Washington Park. It's based on teaching students to make the connection with math through calculating points averages and other sports statistics either for themselves or their favorite players.

And while Mercer has developed some attention for his foundation, he's hoping his investment in Beverly will also resonate with residents and help build his customer base.

"I just want the community to know who I am," he said.