By Justin Breen |&nbspNovember 21, 2016 5:32am | Updated on November 22, 2016 11:37am
@dnainfo_breen
Twitter Facebook Email More
Chicago's Colleen Hammond got her driver's license returned with a thoughtful letter after she had lost it.
View Full Caption
Facebook

CHICAGO — Feel good moments from the Cubs' World Series championship keep arriving. This one came through the U.S. Mail.

A Northwest Side mom was thrilled to find a fellow Cubs fan looking out for her when she lost her driver's license outside Wrigley Field this month — only to have it show up in her mailbox.

The day after the Cubs won it all, Colleen Hammond came to Wrigley Field to write the name of her late daughter in blue chalk on the ballpark's walls.

The lifelong Cubs fan and Portage Park resident figures the license dropped onto the ground on Sheffield Avenue when she took her cellphone out for a photo. Days later, the license arrived in the mail with a heartfelt note that ended:

"I wish you all the best, and from one fan to another, GO CUBS GO!"

Hammond shared the note on Facebook, adding: "There IS good in the world!!!!!"

Hammond and her daughter, Caitlin, had gone to Wrigley Field that Thursday afternoon to write the name of Hammond's late daughter, Megan Siobahn, who died Nov. 3, 2014.

She didn't notice the license was gone until the next day, when, during the start of the Cubs' parade near Wrigley, she reached into her pocket and it was gone. 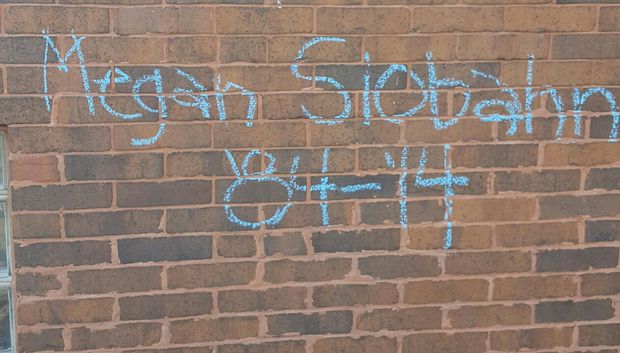 Losing her license had been another setback for Hammond, who was mourning the anniversary of her daughter's death, and the recent death of her golden retriever, Wrigley, who died a few days before the start of the World Series.

"A lot of joy and a lot of sorrow," Hammond said.

Hammond waited about a week before determining she'd head to a secretary of state office to get a new license. But on the day she was to get the replacement, a letter came in the mail.

The two-page letter, which also included the driver's license, was from Thomas Miller, who had recently moved to Lakeview from North Carolina. Miller wrote that he had just experienced "how awful" getting a new license was and wanted Hammond to avoid a similar situation. 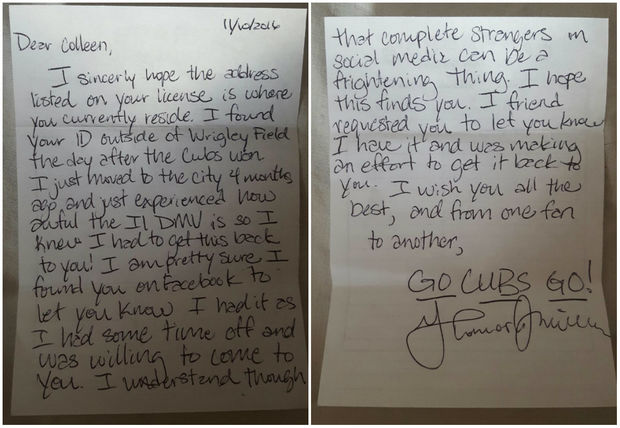 "When I got that letter, that just restored that there is good in the world," Hammond said.

Miller saw the license the same day Hammond had lost it. In the five months he's lived in Chicago, Miller has quickly become a Cubs fan. He said he walked over to Wrigley Field that day to look for Cubs memorabilia.

He sent Hammond a few Facebook messages, but when she didn't respond after a few days, he mailed her the license and letter to the address on her ID.

"I became a Cubs fan pretty quickly because everyone is just so nice and always there for each other, and I just felt like sending the letter was the right thing to do," Miller said. "I wanted to give her a little note, to make her smile."

Hammond, a pediatric nurse at Advocate Lutheran General Hospital, said she wrote a letter back to Miller thanking him.

"The universe is constantly showing me that in your hard times, you're going to find something to be glad about in life," she said.

Since her daughter's death, Hammond started her own club called "Megan's Little Acts of Kindness." Hammond passes out cards with her daughter's photo and the phrase "Build Community And Love People," and also provides foot warmers or coupons for coffee.

"I'm trying to spread little acts of kindness all over my life in my daughter's memory," Hammond said. "Nice to be a recipient this time."