By Howard Ludwig |&nbspNovember 20, 2016 9:35pm | Updated on November 21, 2016 8:02am
@howardaludwig
Twitter Facebook Email More
A counter protest was mostly contained to the northwest corner of 111th Street and Kedzie Avenue in Mount Greenwood. The group organized under the thin blue line flags was smaller in number than what was seen at two previous protests.
View Full Caption
DNAinfo/Howard A. Ludwig

MOUNT GREENWOOD — In the wake of a police shooting in Mount Greenwood that stirred racial tensions, three groups of demonstrators came face to face at the intersection of 111th Street and Kedzie Avenue Sunday afternoon.

Religious leaders and Chicago-area activists gathered at the center of the crossroads along with members of the Revolution Club of Chicago, or RevCom. This group held signs saying, "We will stand up to racist mob threats in Mt. Greenwood."

Meanwhile, a counter protest gathered on the northwest corner of the intersection. This group was slightly larger in numbers. Many on this side of the police line held American flags colored black and white with a single blue line running through the middle and chanted "CPD, CPD, CPD." 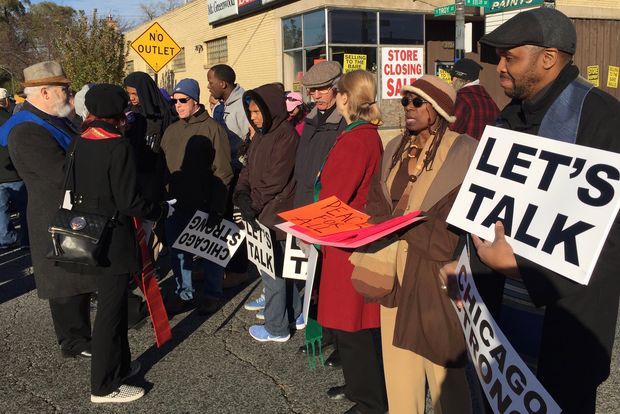 Several pastors from the 19th Ward and other local dignitaries said a prayer ahead of engaging opposing groups of protestors in Mount Greenwood. [DNAinfo/Howard A. Ludwig]

From one block east, a third group of about 35 people marched toward the demonstration. Many walking in arm in arm, these demonstrators held signs that said "Chicago Strong" and "Let's Talk."

This group consisted of prominent pastors and community members from the 19th Ward, including Ald. Matt O'Shea (19th) and Deputy Mayor Andrea Zopp. They handed out fliers asking both parties to come together for "prayer and conversation about peace, unity and understanding."

After about 15 minutes of canvassing both sides, the "Let's Talk" group retreated to the nearby Mount Greenwood Library for pizza and conversation. The media initially was barred from the room.

But many from the RevCom group and the Blue Lives Matter crowd stayed on the street. More than a few of them were miffed about the meeting, including Tio Hardiman. The director of Violence Interrupters Inc. claimed the gathering was contrived.

"They need to stop playing politics with racism," said Hardiman, who downplayed the value of such a meeting with participants such as O'Shea, Zopp and other city employees.

Hardiman said meaningful conversations about race need to stem from those gathered beneath the arch that read "Mt. Greenwood." He openly doubted that those folks were prepared to have such a conversation.

"The deep-seated racists, they are not going to meet with you," Haridman said. "These people have racism in their bones." 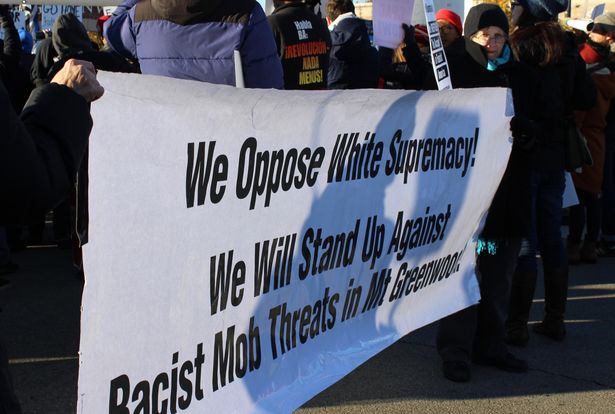 A group of protesters in Mount Greenwood held a banner Sunday at the intersection of 111th Street and Kedzie Avenue. The group asked supporters to join them in opposing "white supremacy." [DNAinfo/Howard A. Ludwig]

But those who stood beneath the thin-blue line flags said their counter-protest had nothing to do with racism. For them, the afternoon was about standing up for their neighborhood and showing support for Chicago police officers.

"I was out here today to show support for my community," said Jennifer Andersen, who has lived in Mount Greenwood since 1999.

This is the third protest since the fatal police shooting of a 25-year-old black man Nov. 5 near 111th and Troy streets. Joshua Beal of Indianapolis was killed in Mount Greenwood after a traffic altercation where an off-duty police officer intervened.

Andersen — who has been married to a Chicago police officer for 25 years — was among several neighborhood residents who cited video footage of Beal appearing to point a gun at a police officer during the road-rage incident.

She also spoke about charged language between the RevCom group and residents supporting police. Andersen was disappointed to hear some in her camp telling protesters to "go back to the ghetto." Meanwhile, she was equally upset by being repeatedly called a racist by those in the intersection.

"There is always going to be racism, but I have never seen it this high in our lifetime," said Andersen, referring to the national discourse.

According to police on the scene, there were no arrests or injuries at Sunday's protest.

Dave Tieman of Mount Greenwood took the "Let's Talk" group up on its offer to meet in the library — though he wasn't happy about it.

He too felt the meeting was manufactured by O'Shea. Tieman believes the Southwest Side alderman and his hand-picked group should have reached out to area residents first before meeting with black activist Jedidiah Brown and other protesters.

"I think [Mount Greenwood residents] should have come first," said Tieman, who then looked around the room. "I don't see a lot of people in my community here."

He and Brown ended up having a charged debate in the library's community room on several topics. Among them, Tieman accused Brown of unfairly labeling Mount Greenwood residents. Brown shared his thoughts with Tieman about people publicly convicting Beal before an investigation is complete.

In the end, the two men shook hands and parted ways.

Brown said such difficult conversations are the beginning of a long healing process. He praised Mount Greenwood as well as the protesters whom attended in the meeting at the library, while also admitting that not everyone participated.