DOWNTOWN — Activists angry over Donald Trump's presidential victory said protests will not stop in Chicago unless the President-elect abandons his "war" on immigrants and other minorities.

About 200 people marched from Federal Plaza to the Trump Tower Saturday, denouncing Trump and seeking to create a "movement" against his policies that target immigrants, Muslims and other minorities.

"An openly racist, sexist, homophobic man ... is about to occupy the White House," said John Beacham of Answer Chicago, the group that organized the protest. "This isn't a moment. It's a movement. We need to do this ourselves." 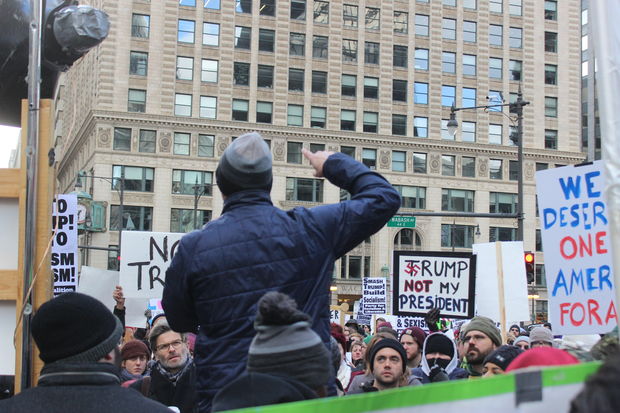 As the group marched from Federal Plaza to State Street, shoppers and tourists lined the streets to take pictures and, in some cases, chant along. Organizers rolled a mobile loudspeaker through the streets, their chants echoing off the buildings.

"We're coming for you Trump," crowd of hundreds chants as they turn onto Wabash in front of the trump Tower. #chicago #Trump pic.twitter.com/qRYYy5nd5Y

Alex Pupon, of Lincoln Park, said he has been marching since the night after the election, when thousands took to the street to denounce Trump. He said he's marching to show his solidarity with those who might be hurt from Trump's policies.

The group ended the march outside Trump Tower, where police had blocked off a stretch of Wacker Drive for the protesters. Rogers Park resident Thomas Jeager said the rally was uplifting, despite the cold and blowing wind.

"I'm pissed off, and it's keeping me warm," he joked. "I'm also terrified. I'm terrified for my Muslim friends. Terrified my mom will lose her health insurance. I'm afraid I'm gonna burn [due to climate change]."

At the front of the pack as we turn on State Street #chicago #Trump pic.twitter.com/nqsEsagLMY

Whereas other protests since the election had a mournful or somber tone, organizers Saturday worked to galvanize support to further action. Beacham, on multiple occasion, implored the group to come to Washington D.C. on inauguration day. 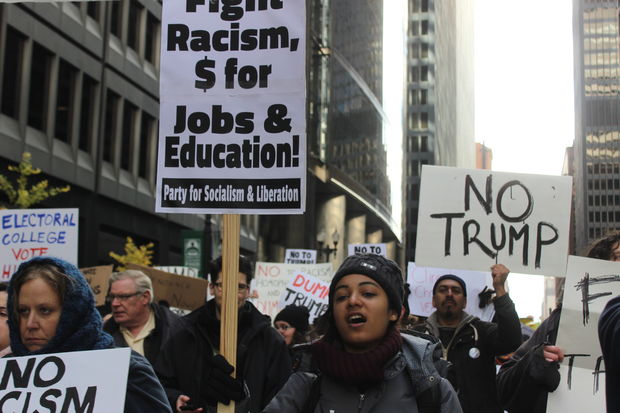 Some protesters spoke harshly of presidential nominee Hillary Clinton and Democrats, causing one woman, Toni Stanley, to ask Beacham if she, as a Democrat, was welcomed at the march.

"There are a lot of Democrats here and I felt it was anti-Democrat," Stanley said.

Stanley, of suburban Oak Lawn, said she came because she opposes some of Trump policies on immigration and civil rights, but did not expect to hear blowback from organizers.

"I came here for immigration, for separation of church and state, and I got a lecture," she said.