For years, thrill-seeking racers have whirled around Downtown late at night, annoying high-rise neighbors and sometimes resulting in tragedy.

While the weekend races on Lower Wacker Drive have drawn the most attention, hordes of motorcyclists doing doughnuts in recent months near Soldier Field have driven city officials to add speed bumps at 18th Street and Lake Shore Drive.

"This is a reasonable response to the needs of the neighborhood," Dowell said.

One spot in particular is the shuttle bus drop-off area just west of Soldier Field's Waldron Deck parking garage. Skid marks are still visible at the area's bus turnaround, where the speed bumps will be installed: 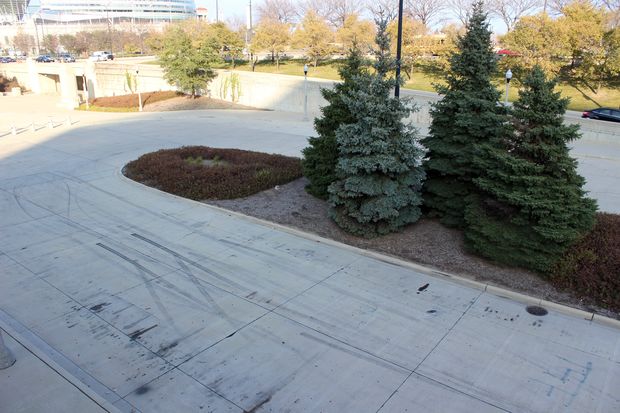 The announcement comes a few weeks after police said hundreds of motorcyclists sped throughout the area around Soldier Field. Michael Pigott, a Chicago police captain, told South Loop neighbors Tuesday night that police will step up their traffic missions in the area, as they have on Lower Wacker Drive.

Ald. Brendan Reilly (42nd) moved to install new speed bumps on Lower Wacker Drive after a racer died in a crash there last year. Police say they've also stepped up their patrols to curtail the squealing practice, but lament that many racers return to the area as soon as police leave.

Dowell said the number of speed bumps being installed and their cost have not been determined. She said she hopes the speed bumps will be installed before winter sets in.