DOWNTOWN — Thousands of outraged Chicagoans shut down the heart of the city Wednesday night to protest Donald Trump's presidential win, hoping the milelong display made their message clear.

Many of the protesters were angry, but several others had tears in their eyes as they marched through Downtown and attempted to process — together — what the future now holds.

"I hope we can make a difference as a nation and our voices will be heard," said Karla Lomeli, 18, a Loyola University student. 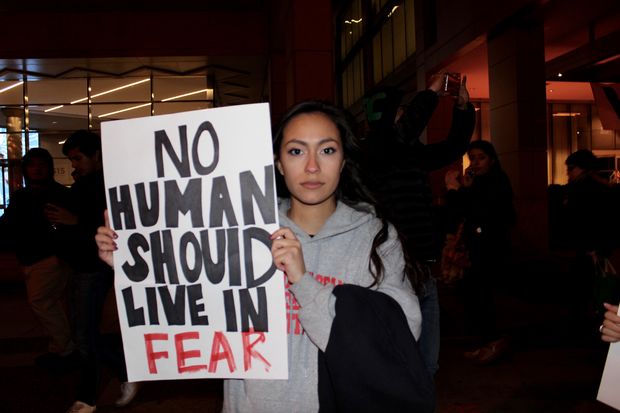 Karla Lomeli with a sign in River North. [DNAinfo/David Matthews]

The crowd started small, across the river from the Trump International Hotel & Tower, 401 N. Wabash Ave., then meandered throughout Downtown as protesters evaded police barricades keeping them from Trump Tower.

The crowd zigged and zagged throughout River North and the Magnificent Mile before staging a sit-in hours later at Wabash and Wacker. They yelled anti-Trump chants the whole way:

"We're here preaching love even though we hate this man," a protester at the rally said. Another protester said, "If the Cubs can come back in the World Series, so can we.''

By 8 p.m. the crowd had blocked traffic on Lake Shore Drive:

Then they returned to Trump Tower, where some protesters scaled a CTA bus: 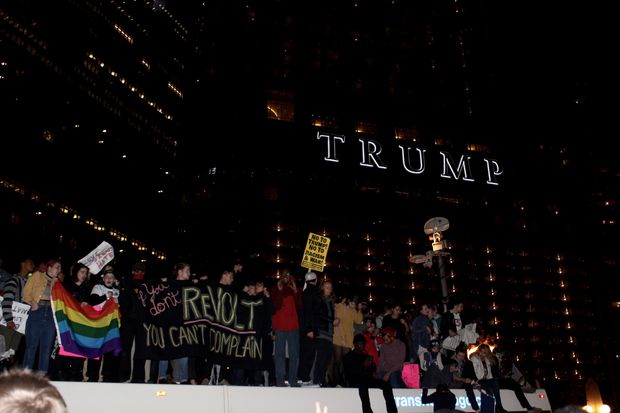 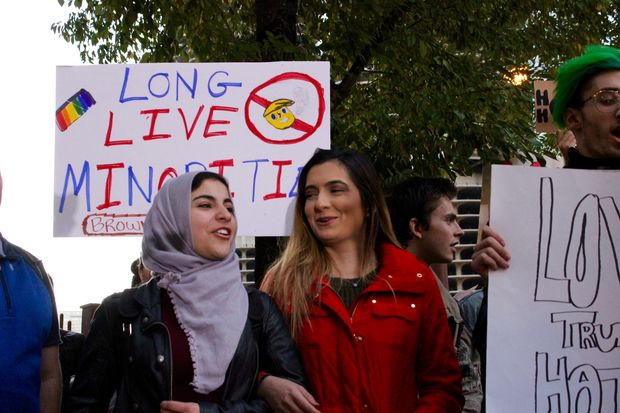 Meriem Sadoun, 22, of southwest suburban Burbank, joined the protests with her friend, Jasmine. Like many Americans, she was shocked to wake up Wednesday morning and learn that Trump won the election.

"[Trump] did us a favor in a sense, bringing us together," she said. "I'm conscious in public spaces, but now people are watching out for me. I'm wearing my headscarf like, 'in your face.'"

The protest has started early across the river from Trump Tower. Maybe 100 here so far @DNAinfoCHI https://t.co/cPs53ZIXWx pic.twitter.com/sb4898hT5y

People met early for the protest planned for 5 p.m. near Trump Tower. Thousands of people on Facebook indicated an interest in going.

"What is needed now is as much outcry and opposition to his presidency as possible," said John Beacham of Answer Chicago, who organized the event.

A smaller group of protesters stood in solidarity outside the Wrigley Building.

A lot different protest is going on outside the Wrigley Building pic.twitter.com/zX9J7KKYV6

This group of students had staked its spot for the protest by 1 p.m. Wednesday.
View Full Caption
DNAinfo/David Matthews

Tuesday's election stunned many American voters left reeling by the success of a candidate they feel is not only offensive but dangerous to various segments of society.

The 98-story skyscraper on the Chicago River has been a backdrop for Trump opponents' rallies since the controversial presidential-elect entered the race more than a year ago. Activists shut down a planned Trump campaign appearance here in March.

The protest sharply contrasted with the partying of hundreds of Trump supporters early Wednesday after their candidate sealed his bid for the White House.

Beacham said his organization is part of a nationwide coalition that planned protests across the country Wednesday. The group calls itself anti-war, anti-poverty and anti-racism.

"Trump represents the opposite of that," Beacham said.

Trump had hinted that he wouldn't accept election results if he didn't win.

When asked why an anti-war group would protest a democratically elected president, Beacham cited an "entire problem" with the American establishment.

"I'm talking about the country where the 1 percent is in charge and has been for 30, 40 years," he said. "We have the right to reject an official, even the president of the United States, if that person represents something that is opposed to what the people want."

A group of students had already staked its spot for the protest by 1 p.m. Wednesday. They said they were not protesting the election, simply the fact that enough Americans supported Trump to win him the White House.

Spooky Hendricks, another Columbia College student, was upset not only by Trump's views but also by those of his running mate, former Indiana Gov. Mike Pence.

"As a queer female, having a vice president who believes in electrotherapy conversions is troubling," she said.

Previous protests in front of the tower included womens' rights groups responding to Trump's taped lewd remarks about grabbing women without consent, as well as immigrant groups and official campaign rallies led by the Democratic Party.

Chicago Police said via email that the department will ensure "adequate police coverage so that participants have an opportunity to safely assemble and demonstrate."

Another popular Facebook event calling for Chicagoans to "point and laugh" at Trump Tower after the election was canceled after Trump's presidential victory.

Donald Trump protesters on the street and on top of a CTA bus near Trump Tower on Wednesday night, a day after Trump won the presidential election
View Full Caption
DNAinfo/David Matthews
Twitter Facebook Email More