MOUNT GREENWOOD — Dueling rallies held by black activists and Blue Lives Matter supporters turned chaotic Tuesday night as the activists were "boxed in" on Kedzie Avenue and encouraged by police to leave on a CTA bus.

Police shut down Kedzie Avenue at the intersection of 111th Street in Mount Greenwood as the two sides clashed near the scene of a fatal police shooting that left 25-year-old Joshua Beal dead over the weekend.

As the sun went down, hundreds of pro-police supporters lined the sidewalk near 111th Street and Kedzie Avenue, awaiting the arrival of protesters led by the Rev. Michael Pfleger as well as activists Jedidiah Brown and Ja'Mal Green. 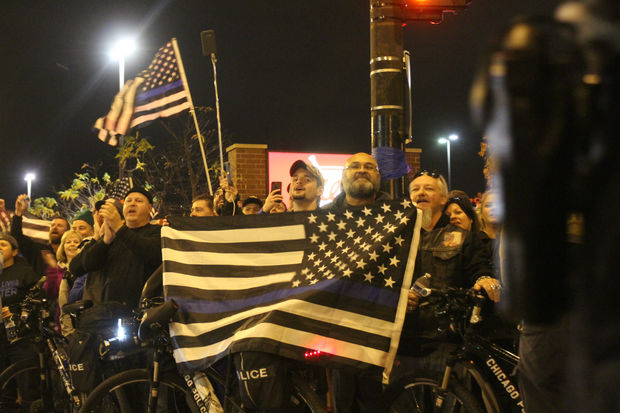 The activists arrived at around 5:30 p.m. and were quickly drowned out by a chorus of boos and demands to "go home." Others in the crowd revved motorcycle engines and blew air horns in an effort to drown out Brown, Pfleger and others.

The group of about 25 black activists said a prayer in the middle of the intersection and sang the national anthem before marching north on Kedzie Avenue.

"If we agree black lives matter and blue lives matter, then what are we fighting for," Brown said into a microphone. He was met by jeers from the crowd, despite his pleas that "We're all Chicagoans."

Marchers headed only a few hundred feet before turning around, as hundreds of police supporters — most of which were white — took to the street. The activists — who were mostly black — were effectively pushed toward the awaiting bus and told it would bring them back to their cars.

"This is white privilege," said Green, who was among several activists who felt like they were being made to leave. "They [police] let us get boxed in."

Police formed a circle around the bus as those who gathered discussed whether or not to step aboard. Meanwhile, both sides traded racially-charged insults at each other. Pfleger was the target of some of the worst vitriol from the crowd, which called him "disgraceful". 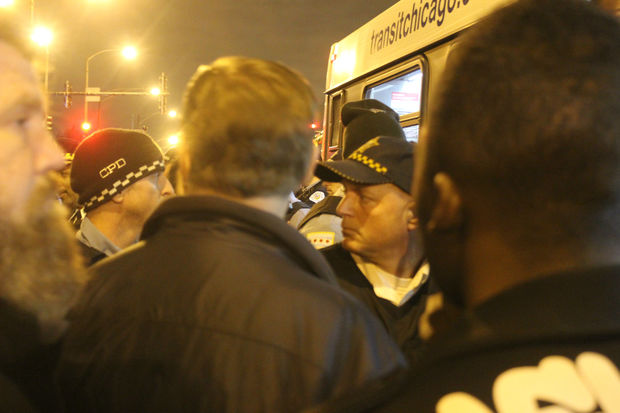 Officers and activists discuss leaving the scene of the rally on a CTA bus Tuesday in Mount Greenwood. [DNAinfo/Joe Ward]

Ultimately, the activists did not get on the bus and instead walked down an alley to get to their cars. Others retreated to the northeast corner of 111th Street and Albany Avenue to wait for a ride.

There were no arrests made Tuesday night and no reported injuries, according the Chicago Police Department's News Affairs office.

However, several activist said the police supporters should be arrested for jeopardizing their safety and forcing them to end their gathering early.

"I'm disappointed," said activist Bryce Porter of Roseland as the group argued over whether or not to leave on the bus. "What we're being met with is a threat of violence. We just wanna peacefully protest."

Brown said they showed up not only to demand a fair investigation into what happened leading up to Beal's shooting, but to speak out against the racist rhetoric coming from the Blue Lives Matter crowd.

"There's no part of Chicago where black Chicagoans cannot go," one protester said. "Especially in Chicago in 2016. We're not going back to days where there are white-only areas that black people aren't allowed."

Hearty boos for Father Pfleger leading prayer. "We will respect each other! Amen." pic.twitter.com/3lsbKtix0p

Brown said several black Mount Greenwood residents thanked him and his fellow activists for showing up and speaking out. That said, his group was mostly met vitriol as the Blue Lives Matter crowd booed and told them to "go back to your own neighborhood" and "stop shooting cops."

Police officers tried to calm the supporters. "Don't embarrass me," one policeman told the crowd as they attempted to follow black activists to their cars.

The neighborhood has gained national attention following Sunday's protest, when black protesters had to be escorted to their vehicles by police as some white residents hurled racial slurs at them.

Some who showed up Tuesday wanted to make it clear that not all pro-police Mount Greenwood residents are racist.

Carol Jean of Mount Greenwood said she was there to support police, but said she wasn't sure she would stick around if the situation grew tense, like in previous days.

"I'm not sticking around if it gets ugly," she said. "I support the police but I don't want the name calling. Contrary to what people believe, not everyone is racist in Mount Greenwood."

Michael Smith, 17, is a Mount Greenwood resident and son of a Chicago Police officer.

"I'm here to support my boys in blue, to support my mom," he said. "I was proud of this neighborhood standing up to Black Lives Matter. I consider it like domestic terrorism." 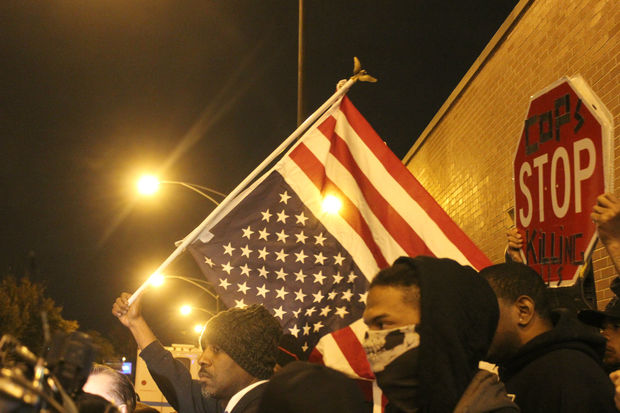 Activists arrive in Mount Greenwood to a chorus of boos Tuesday. [DNAinfo/Joe Ward]

Despite Smith's views on Black Lives Matter, he said he doesn't appreciate use of the "N-word" and said he heard it "only once" on Sunday.

"There are some racists in this community, but in what community is there not?"

Liz Moran said she came to the rally for one reason.

"My son is standing over there in uniform," she said as she pointed to the east side of Kedzie, where a wall of officers were stationed.

Her son works on a tactical team in the Englewood District, "but they sent him here tonight."

Moran, of Beverly, said the neighborhood has a problem with funerals for gang members coming through the area, and an armed confrontation was bound to happen.

"Who goes to a funeral with a gun?" she said. "We don't have to worry about him no more."

William Anderson's son attends the Keller Regional Gifted Center in Mount Greenwood. He wanted to see the protest first hand and pointed to a nearby store where he recently purchased school shoes.

"It's OK to come to school, but leave after school," said Anderson, who is black.

Casey Allen, 21, of Alsip also attended the rally with a group of three friends. He stood beside the black activists wearing a shirt from Brother Rice High School. Allen attended the school in Mount Greenwood for a year. He graduated from a nearby school in the suburbs.

"It was different coming out here and witnessing all the racial slurs and to see what they [the crowd] had to say about the Black Lives Matter movement," said Allen, who is also black.

"It really hurts me to see we can't come together and be in peace."

Protesters begin walking down Kedzie, as pro-police scream at them to "clear the streets." pic.twitter.com/FoAOB1b5No

Chorus of boos, chants of CPD as the first black activists show in Mount Greenwood. pic.twitter.com/gTRdzt4i5f

Blue Lives Matter supporters make sign that riffs on activist chant: "CPD/KKK, how many kids will you kill today?" pic.twitter.com/4Y2QJ5Z72b

'No Place' In Chicago For Slurs At Joshua Beal Shooting Protest, Rahm Says

Activists Felt Like They Were 'Back In The '60s' At Beal Protest, They Say