CHICAGO — A party 108 years in the making had Downtown jam-packed Friday.

The Cubs parade and rally ending in Grant Park brought out huge pre-dawn crowds, and thousands more people flooded in throughout the day. Metra trains were packed to capacity and began passing some stations altogether. "L" trains have been loaded with Cubs fans all day.

If you're going, you better get going — massive crowds are expected, and there are security checkpoints you'll need to wait out. Police were only letting people into the park at Jackson and Congress as of 10:30 a.m. Friday.

The packed CTA trains are filled with jersey-wearing fanatics (some of whom had already had a drink or two.) Officials were warning of "major delays" on the Blue line around 9:30 a.m. Metra also reported crowded trains, forcing some to run express from certain suburbs to Downtown.

Even as early as 3 a.m. thousands of the fans were already lining up to get into Grant Park, where the rally is scheduled to begin midday. Fans also lined the Chicago River, where crews began dyeing the river blue just after 7 a.m. 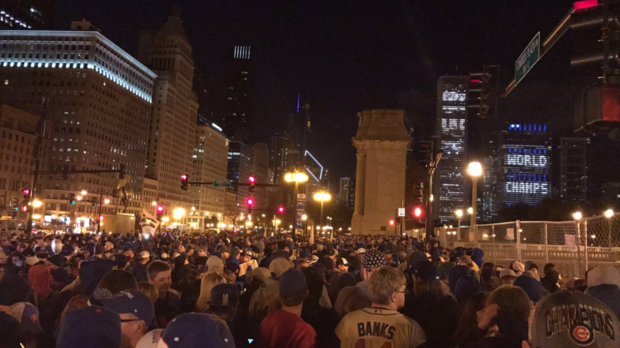 Here's the crowd at 5 a.m. (Twitter/@staygoldenxo)

Chicago's Cubs World Series victory parade kicked off just after its scheduled start time of 10 a.m., beginning at Wrigley Field and ending in Grant Park, with a stretch of it traveling down Lake Shore Drive, subject to change, officials said.

The route includes Addison east from the ballpark, then Lake Shore Drive to Michigan Avenue, then Columbus Drive between Monroe Street and Balbo Avenue. The Downtown portion of the parade kicks off at 11 a.m., and the rally will take place at Lower Hutchinson Field in Grant Park around noon.

RELATED: Heading To The Cubs Parade Friday? Here’s How To Get There

"The parade will stand the test of time," a tired but excited Mayor Rahm Emanuel said Thursday, who issued a statement Friday thanking the many city workers who put in overtime to make it happen.

"Thank you to the men and women of the Chicago Police Department, Chicago Fire Department, Office of Emergency Management, Special Events, first responders, and city workers from all agencies and departments whose hard work made today possible," Emanuel said in a statement.

"As we celebrate the efforts of the Cubs on the field, we also honor the Chicagoans who have worked around the clock to make this postseason and parade possible."

The timing worked out well for Chicago Public Schools students, who have the day off for a teacher development day.

The timing works out well for Chicago Public Schools students, who have the day off for a teacher development day. As for everyone else: let's just say a lot of people will call in "sick." Or, just call in "Cubs."

While Wednesday night in Wrigleyville was quite boozy, the city is implementing a zero-tolerance drinking policy along the route.

Closed water bottles will be allowed into the rally. There will be food vendors on site, the city said.

Just saw the buses pull up to #Wrigley Players will be on board for the parade in just over 3 more hours! #Cubs #WorldChamps pic.twitter.com/uuPVIQvqLg

The city offered suggested sites to view the parade. They are:

There will be street closures along the route, with some starting as early as 4 a.m. Friday. The city did not detail the closures or the times. The CTA will be adding buses and trains to help people reach the parade routes, but the transit authority warned fans "to allow plenty of travel time due to street closures, traffic congestion and reroutes." Attendees should also fill up their Ventra cards before heading to their nearby "L" station, where the lines could be long.

Metra is also adding service Friday, and offering a $5 unlimited ride ticket for the parade day.

Friday "is expected to be the busiest day in Metra’s history,” said Metra Executive Director Don Orseno in a statement. “We ask all of our regular customers and the new customers we expect to see to be patient and, most importantly, be safe.”

RELATED: What Will Cubs Ticker Tape Parade Be Like? Check Out This Video From 1932

The City of Chicago preferred a Monday party for logistical reasons, sources said, but Friday won out.

The city put out a call for suburban police departments to lend officers for the rally, which is sure to draw hundreds of thousands of people along the route and in Grant Park.

The parade started at Sox Park, winding through neighborhoods like Bridgeport, Pilsen, Chinatown, Little Italy, Greektown and Bronzeville before ending up Downtown.

It was capped with a victory rally at LaSalle Street and Wacker Drive. Former Journey frontman Steve Perry led a rendition of "Don't Stop Believin,' " which served as an anthem for the Sox that year.

Don't expect Perry to show for the Cubs parade. But it would be a stunner if Pearl Jam frontman Eddie Vedder didn't play some role. Perhaps a rendition of his "All The Way" ballad, pleading for a Cubs World Series title.

The Blackhawks have had three parades through the neighborhoods and Downtown. 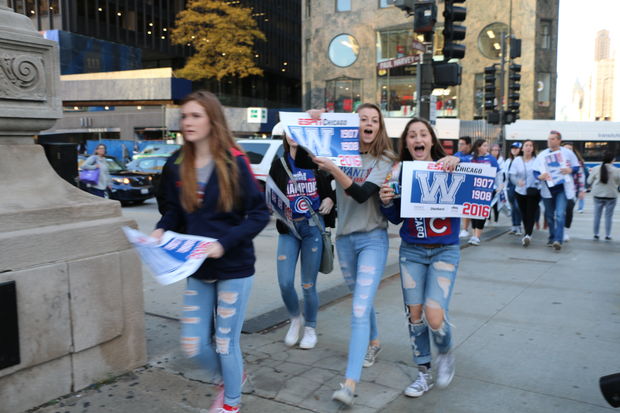 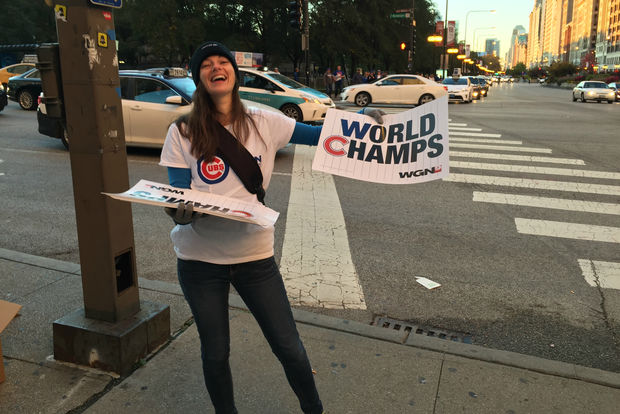 Fans were on the scene in the Loop before dawn Friday to get a spot for the rally. [DNAinfo/Angela Myers] 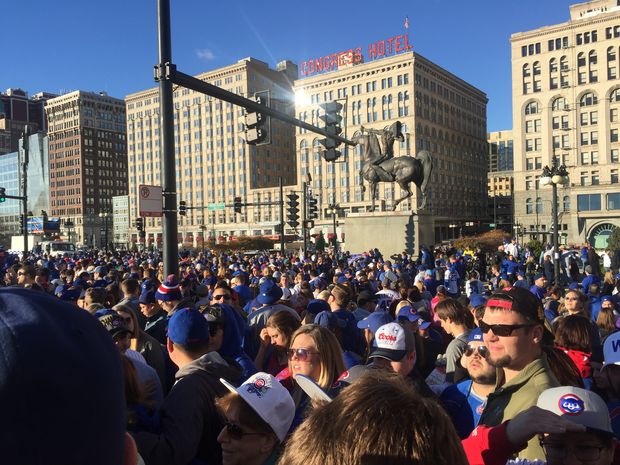 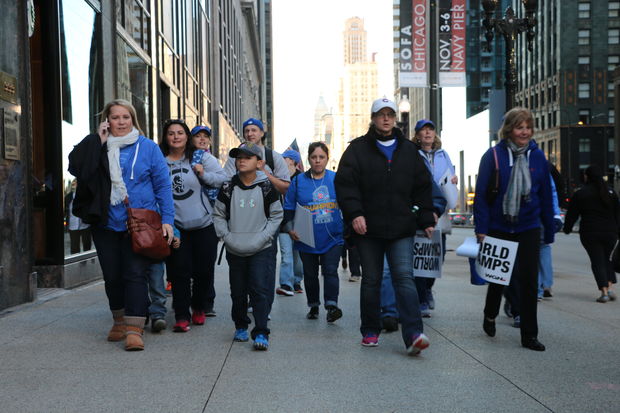 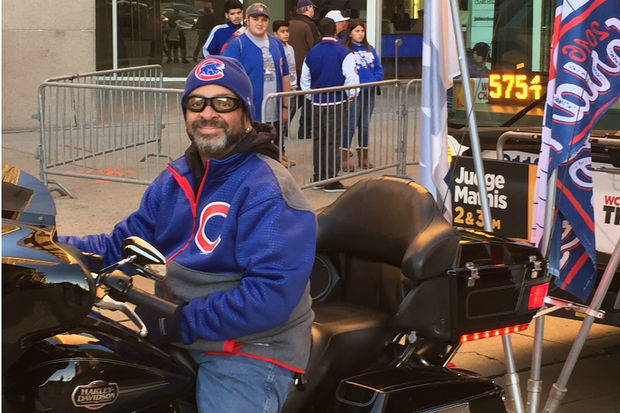 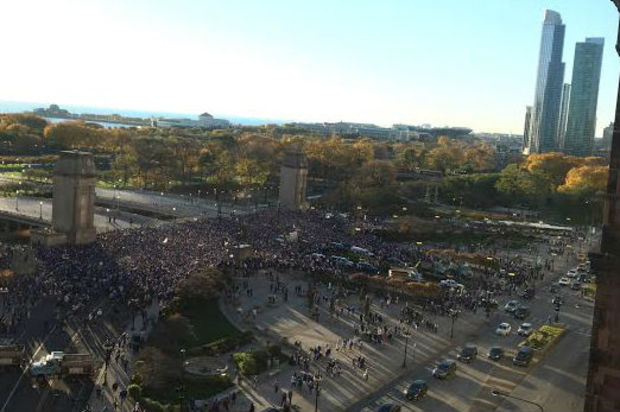